Why does this washing machine have microprocessor pins directly connected to the main AC power?

I'm studying the attached washing machine partial schematic at the point in which the main microcontroller activates 2 water elecrovalves. I would ask: 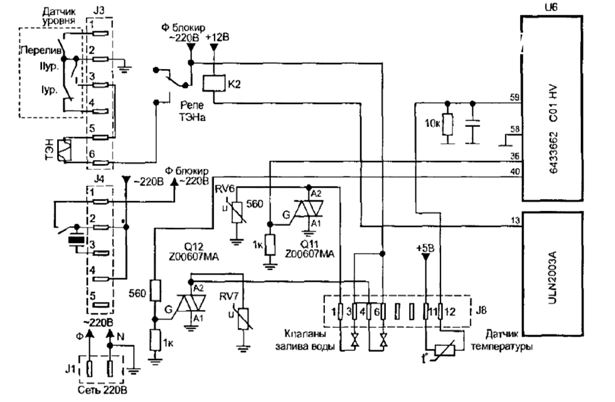 The microcontroller only cares about voltages between it's pins. As long as the voltage between the pins is acceptable the microcontroller will be fine. The fact that in some cases the whole circuit will be moving up and down at 50Hz relative to ground doesn't bother it**

In large volume the former approach is often more economical as it avoids the need for a bunch of isolation components. Yes it means your buttons and displays need to have safety isolation but that can often be done at very little cost through careful design of the front panel.

* As you point out in your comments on Olin's answer the "Neutral" connection on the machine may end up connected to either Live or Neutral as some countries use unpolarised plugs.

** If the frequencies were much higher then moving up and down relative to earth ground could be an issue as stray capacitance is everywhere.

Not the answer you're looking for? Browse other questions tagged control triac or ask your own question.