If you were to add “DC offset” with a clamp, can you easily remove it afterwards?

I don't have a circuit right now, but let's say you wanted to add DC offset to a signal (ex. to prepare a signal for an Op amp stage) but then afterwards center that signal on 0v.

Is this possible with a clamp for adding offset, and then using a high pass filter for removing offset?

It is interesting to see what coupling capacitors really do in AC amplifiers. The usual viewpoint at the capacitive coupling is that capacitors prevent affecting the DC biasing current from the previous stage; thus the name "DC blocking capacitors". For example, Wikipedia says:

"In analog circuits, a coupling capacitor is used to connect two circuits such that only the AC signal from the first circuit can pass through to the next while DC is blocked. This technique helps to isolate the DC bias settings of the two coupled circuits."

This explanation is true and it does good work for conventional "teachers" that do not like their student to "trouble" them with confusing questions-:) But it is a formal and sketchy "explanation" since it actually does not explain how the AC signal passes through the coupling networks and what they really do. The frequency-domain explanation where the CR coupling hetwork is presented as a high-pass filter is even more formal...

Here, I would like to suggest to your attention more four fresh and not so usual time-domain explanations of the legendary capacitive coupling technique; I have been using them at the lectures with my students through years...

The key point of understanding and explaining the capacitive coupling is first to see that the capacitor is "hanged", as a kind of bridge, between two sources: from the left side - by the perfect input voltage source that has to ensure a galvanic path to ground; from the right side - by the (more) imperfect voltage source built by the biasing voltage divider and the power supply. Then, assuming the input voltage is zero, it is easy to see that the capacitor charges to the bias voltage of the right source (the left is absent) and the amplifier is correctly biased. Finally, wiggling the input voltage fast enough (so that the average voltage across the capacitor stays almost constant), we can use one of (and why not the all?) viewpoints below to explore the circuit operation in an attractive manner.

PERFECT VOLTAGE SOURCE IN PARALLEL TO IMPERFECT ONE. First, we can see that two voltage sources are connected in parallel to the amplifier input. The left of them is composed of two perfect voltage sources in series (the input source and the charged capacitor); the right is the biasing one. So, in this arrangement, the perfect left source (Vin + Vbias) dominates over the imperfect biasing source and imposes its full voltage on the amp input.

CURRENT STEERING. The BJT emitter-grounded amplifier is a special case of this arrangement since its input (the base-emitter junction) behaves as a constant-voltage nonlinear element (a voltage stabilizer). Now we have two (almost) perfect voltage sources connected in parallel and this combination is supplied by the biasing current source (the base resistor and the power supply in the attached picture below). So, when the input voltage varies, the biasing current vigorously diverts (is steered) between the input source and the amp input.

SERIES VOLTAGE SUMMER. Of course, we can see the series voltage summer (according to the Kirchhoff's voltage law) needed for the biasing - it sums the input voltage Vin and the biasing voltage Vbias across the charged capacitor so their sum Vin + Vbias is applied to the amp input. 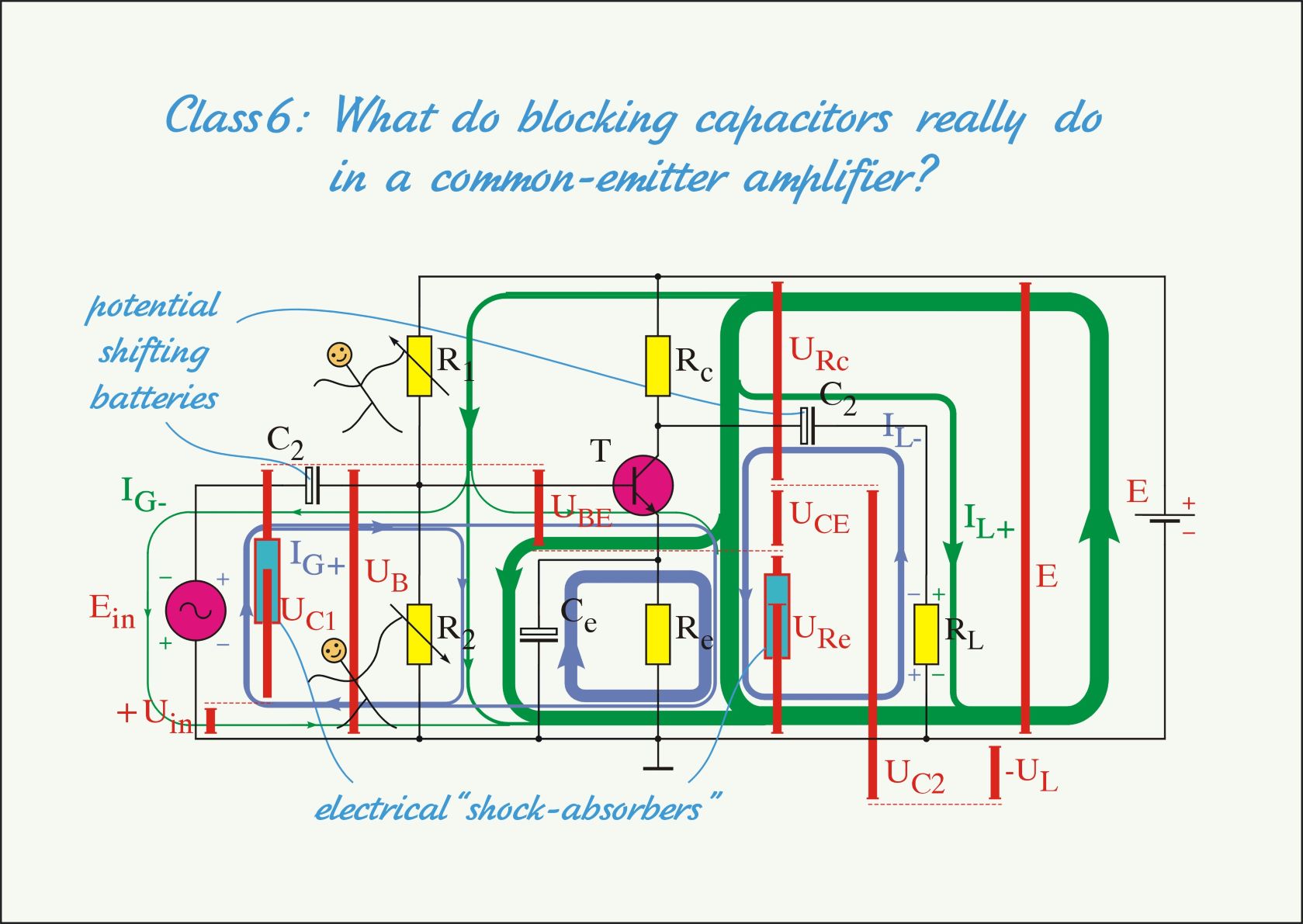 VOLTAGE SHIFTING. And finally, we can imagine the capacitor is a kind of an electrical "shock-absorber" shifting (translating, moving, displacing...) the input voltage variations. 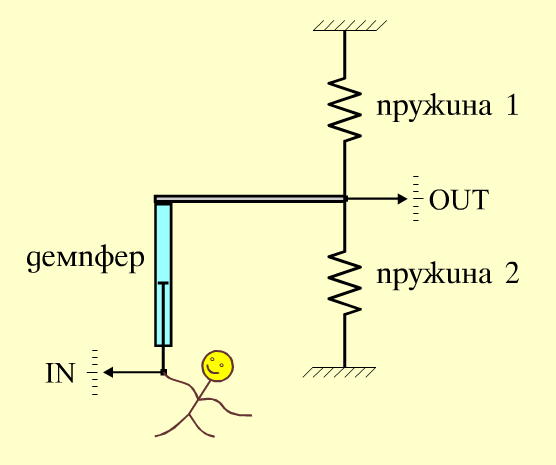 Let's consider the three typical situations in the circuit operation:

1. CHARGING THE "BATTERIES" (ZERO INPUT VOLTAGE). For clarity, first assume in the beginning, when we switch on the power supply, the input voltage is zero and the left C1 terminal is grounded through the DC zero source resistance. The capacitor C1 and the base-emitter junction are connected in parallel.

Similarly, the output capacitor C2 is "automatically" charged through the galvanic load to the quiescent voltage 1/2Vcc (it is interesting to see how). Until this initial stage, when the capacitors charge, the amplifier does not work properly and the load can be even damaged if the capacitors have too big capacitances.

We can present this initial stage in an impressive way to readers, if we made them think of the capacitors as of slowly stretching shock-absorbers (the red voltage bars Uc1 and Uc2 give some impression of such an representation).

2. DISCHARGING THE "BATTERIES" (POSITIVE INPUT VOLTAGE). When the input voltage rises above the ground (becomes positive), the total voltage of the left composed voltage source (Vin + Vc) exceeds the base-emitter voltage (0.6 V). So this source adds an additional current to the initial bias current (set by Rb) through the base-emitter junction thus discharging. But because the capacitance is large enough, the voltage across the capacitor decreases slightly, and the input capacitor conveys the increasing input voltage variations to the transistor base (they are "lifted" with 0.6 V as the transistor "wants"). 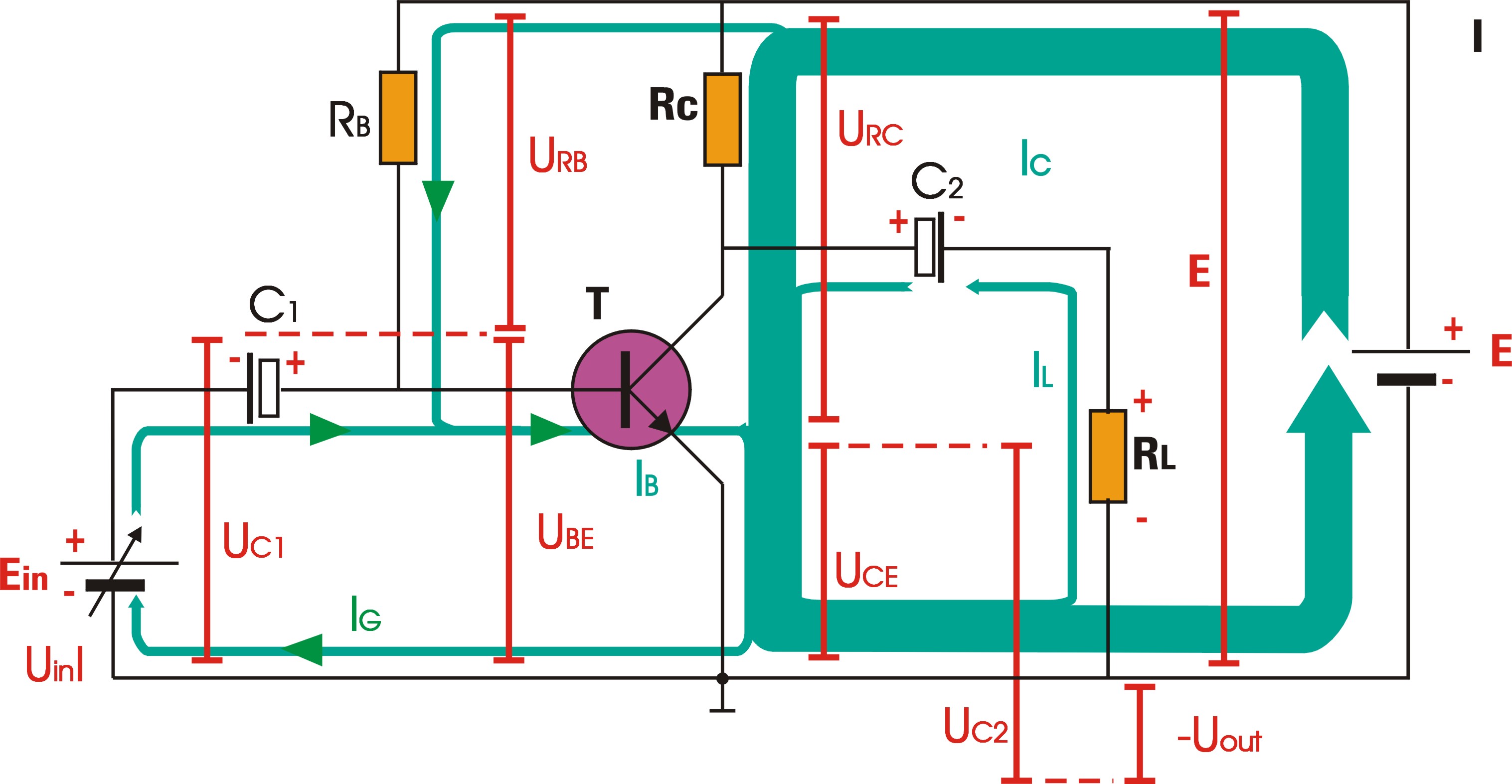 In a similar way, the output capacitor descends the collector variations with 1/2Vcc thus conveying them to the load as it "wants".

In the impressive mechanical analogy, the shock-absorbers convey the fast input/output movements up.

3. RECHARGING THE "BATTERIES" (NEGATIVE INPUT VOLTAGE). When the input voltage descends below the ground (becomes negative), the total voltage of the left composed voltage source (Vin + Vc) becomes less than the base-emitter voltage (0.6 V); so the composed source begins diverting a part off the biasing current thus recharging. Again, because the capacitance is large enough, the voltage across the capacitor increases slightly (it restores the charge), and the input capacitor conveys the decreasing input voltage variations to the transistor base ("lifted" with 0.6 V as the transistor "wants").

In a similar way, the output capacitor conveys the increasing collector voltage variations to the load as it "wants".

In the mechanical analogy, the shock-absorbers convey the fast input/output movements down.

Your question is very unclear, but nevertheless I try to give you some general advice on AC signal shifting:

So a capacitor acts like „some kind of coupling device“ between different DC operating points of an AC signal.

... but let's say you wanted to add DC offset to a signal (ex. to prepare a signal for an Op amp stage) but then afterwards center that signal on 0 V.

You would do as shown below.

Figure 1. Adding a DC offset is often required when processing an AC signal with a circuit with a single-ended supply.

Is this possible with a clamp for adding offset, and then using a high pass filter for removing offset?

There is no need for a clamp, just a bias.

Correct. A high-pass filter will block DC (which is an infinitely low "frequency"). You just need to watch the low-frequency cut-off point which will be determined by C2 and RL.

Not the answer you're looking for? Browse other questions tagged circuit-design filter diode-clamp or ask your own question.

4
Single supply opamp with AC coupling
1
In a class C amplifier, how does RB biases the base of transistor?