As part of my circuit, I need to step down voltage from +15V to +-12V. For this purpose, I am using Traco TEN 20-2422WIN. I was going through its application note when I saw that they because of EMI, advice to connectC3 and C4 between input and output. Can anyone elaborate on possible reasons for this 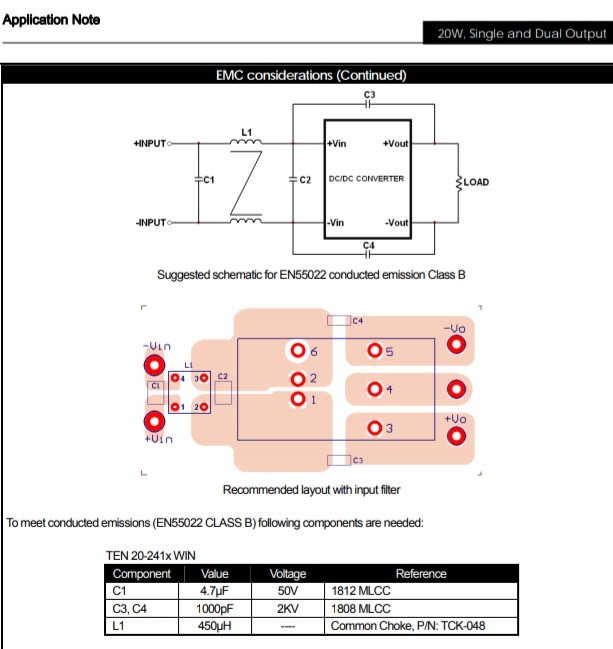 C3,4 1000pF is much smaller Z than the input and output Z yet lower ESR. It it is a form of differential input and output negative feedback to lower the output impedance with rising frequency within driver's bandwidth that works for this unit. So it affects some f>>1/RC for abrupt load changes.

Pulsed high current loads can lead to transients on both output and input. Most often these transients cause interference on the sensor cables due to common mode unbalanced impedance in micro or milliohms between Vout and Ground frame.

The input you show for AC is called a "Line Filter" and for DC often called a BALUN to balance unbalanced differential power or signals by raising the series impedance and cross-winding connections to then cancel so the differential impedance is low but Zcm is high thus less stray EMI current to nearby inputs or cables.

The output cap must follow the OEM's recommendation and is often distributed to each load with single or multiple parts to stored surge energy and thus reduce stray current loops and voltage spikes.

By the way, your converter boosts voltage on the output to 24V split (dual 12) outputs, so current must be increased on the input to consume the same power (V*I) plus losses.

More detailed answers may be researched on PSU EMC or EMI reduction for power supplies for electromagnetic compatibility. (EMC)

This is how I'm envisioning those two OUT_IN capacitors C6 and C8: 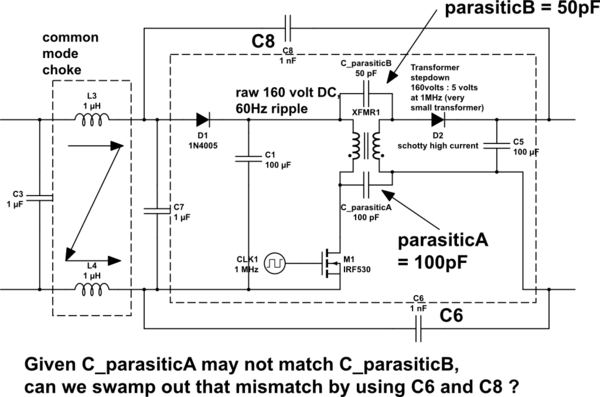 Not the answer you're looking for? Browse other questions tagged power-supply capacitor dc-dc-converter or ask your own question.