This is a follow up to this issue: Damaged TPL7407LA Transistor Array (*Updated With Scope Testing Images*)

We are experiencing both reverse polarity and transient voltage spikes in our automotive circuit application pictured above where we've added protection for both situations but are still experiencing aforementioned behavior when an adjacent input to our device is being switched off (oscilloscope input 3 - PARK). 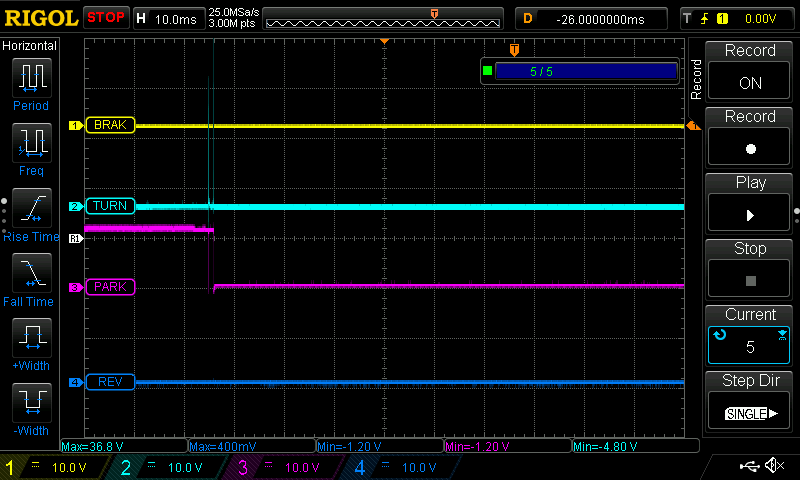 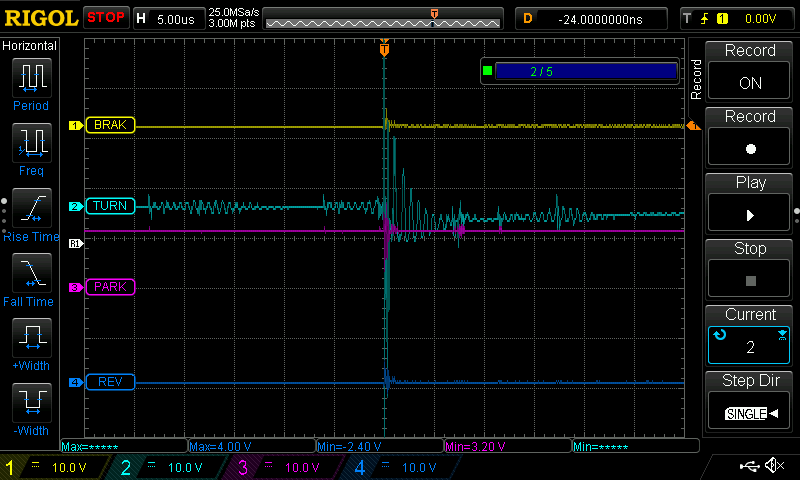 The only feasible possibility that we can consider at this point is the fact that the diodes may not be reacting quick enough these conditions.

Here are the reverse polarity and TVS diodes we are using, respectively.

Curious to hear what you folks have to say on this topic.

In the first waveform I see a single spike related to 'Park' being switched OFF.

In the second waveform I see an intense ring wave, cause unknown.

I spent 15 years working at a surge suppressor plant and the hard lesson was that no matter how expensive or sophisticated the suppressor was the best suppression was right at the device itself. There is a nasty equation that haunts us all.

For every foot/300mm of distance from the suppressor the voltage rise could be 100 volts.

That meant some surge suppressors had to be at the point of use, including their ground connections, and in some cases 100uH to 1mH inductors in series.

The point I am making is that for any suppression to work at the scale of switch's and relays the suppression devices had to be at the point the surge was generated.

For every inch/25.4mm the suppressor was from the surge creating device (including ground return) the voltage would rise by 8.5 volts. If high enough some ringing effects would occur as there was nothing close enough to dampen them.

Whatever you use to clamp surges need to be right at the point the surge is created, including diodes, TVS diodes, capacitors, inductors. Else your wasting your time and money and the frustration builds up.

Not the answer you're looking for? Browse other questions tagged automotive tvs reverse-polarity transient-suppression or ask your own question.

9
In terms of protection, how does this automotive power supply circuit look?
2
Reverse Polarity & Load Dump Protection (TVS)
2
TVS Diodes Causing Board Failures by Failing Short, How Do I Prevent It?
0
TVS Diode Selection for Automotive