How to control a motor driver (BTS7960) without PWM

Using a Raspberry Pi 3B+, I need to control a motor which works in 12V and can draw up to 2A. It doesn't use PWM. It just goes in one direction or the other (reverse/forward) when interchanging the +/-.

Since the Raspberry Pi can't do that alone, I bought an external 12V/10A power supply and a motor controller called BTS7960 (datasheet: here, image below).

However, when I set HIGH one of these PINs (GPIO 16 or GPIO 20), I measure a voltage of +/- 0.01V between numbers 3 and 4 instead of the expected +/- 12V. So it seems to work a little because the voltage switches from positive to negative correctly (and becomes 0V when both GPIO PINs are LOW), but the value is totally wrong (0.01V instead of 12V).

You need to drive one of the direction lines (E or F) high at the same time that you drive the corresponding PWM line (G or H, repsectively) high. These two signals are effectively ANDed together by how the driver chips are wired together. My guess would be that E and F control the two high-side switches (one on each chip) and that G and H control the two low-side switches.

On the website where I bought the board and on several other websites, it was explicitly written that the "input level" could be 3.3-5V, while some other websites only read 5V.

As the RPi GPIO PINs can deliver only 3.3V, I decided to use 3.3V. It didn't work. As a commenter on my OP emphasized on the fact that it needed 5V to work, I decided to try it out. Guess what!? It worked.

In order to make it work, you need to:

Despite the fact that many sources say that this board works with 3.3V, it seems completely false. It needs 5V to work properly.

There seems to be some misinformation or lack of information regarding this board.

This is exactly the same input threshold as RS232 Rx, TTL input and 74HCTxxx CMOS logic.

If the input pins are directly connected to the inputs on board, it must comply to meet spec.

So I wonder about your test methods.

The reason for logic higher logic levels is higher stray motor current noise immunity. This tells me your shielding and immunity is less than optimal.

I surmise that the board you have bought was not designed be driven by a 3.3V MCU. It may work, but depending on your MCU may not. But there may be a couple of solutions to your problems.

The likely schematic for this board is here: 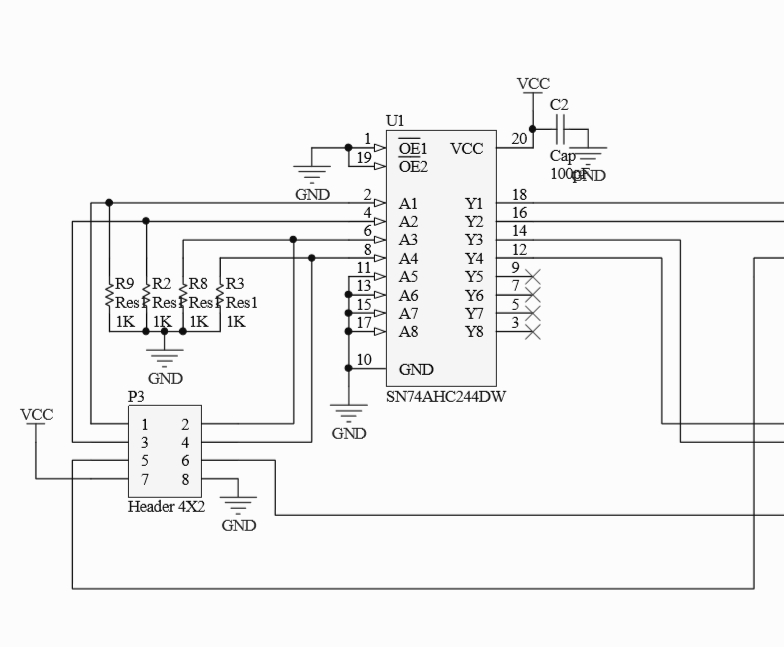 The various boards from different suppliers may differ in the selection of the components but you should note that THIS BOARD AS SHOWN IS NOT 3.3V compatible due to the high current input requirements. Your board picture shows the same value of pulldown resistors. The 1k OHM pulldown resistors result in a lot of current being required with the input high, and this may well pull the outputs of a 3.3V MCU out of spec.

The datasheet for the (Phillips) 74HC244 shows the following:

While the datasheet does not show the Vin(high) value for a 3.3V supply we can extrapolate that it is likely to be a minimum of about 2.4V to register a high. This requires the Raspberry PI I/O pin to source at least 2.4mA at 2.4V. It may not be capable of that. (There is no problem for the Vin(low) since the 1k Ohm resistors pull down the input).

You can check by simply looking at the IN and INH voltages from the 'PI when driving the board.

Counterintuitively you might be able to sort your drive problem by actually reducing the VCC for the 74HC244.

The datasheet for the BTS7960 shows the IN and INH signal voltage levels with a worst case voltage of 2 and 2.15V. 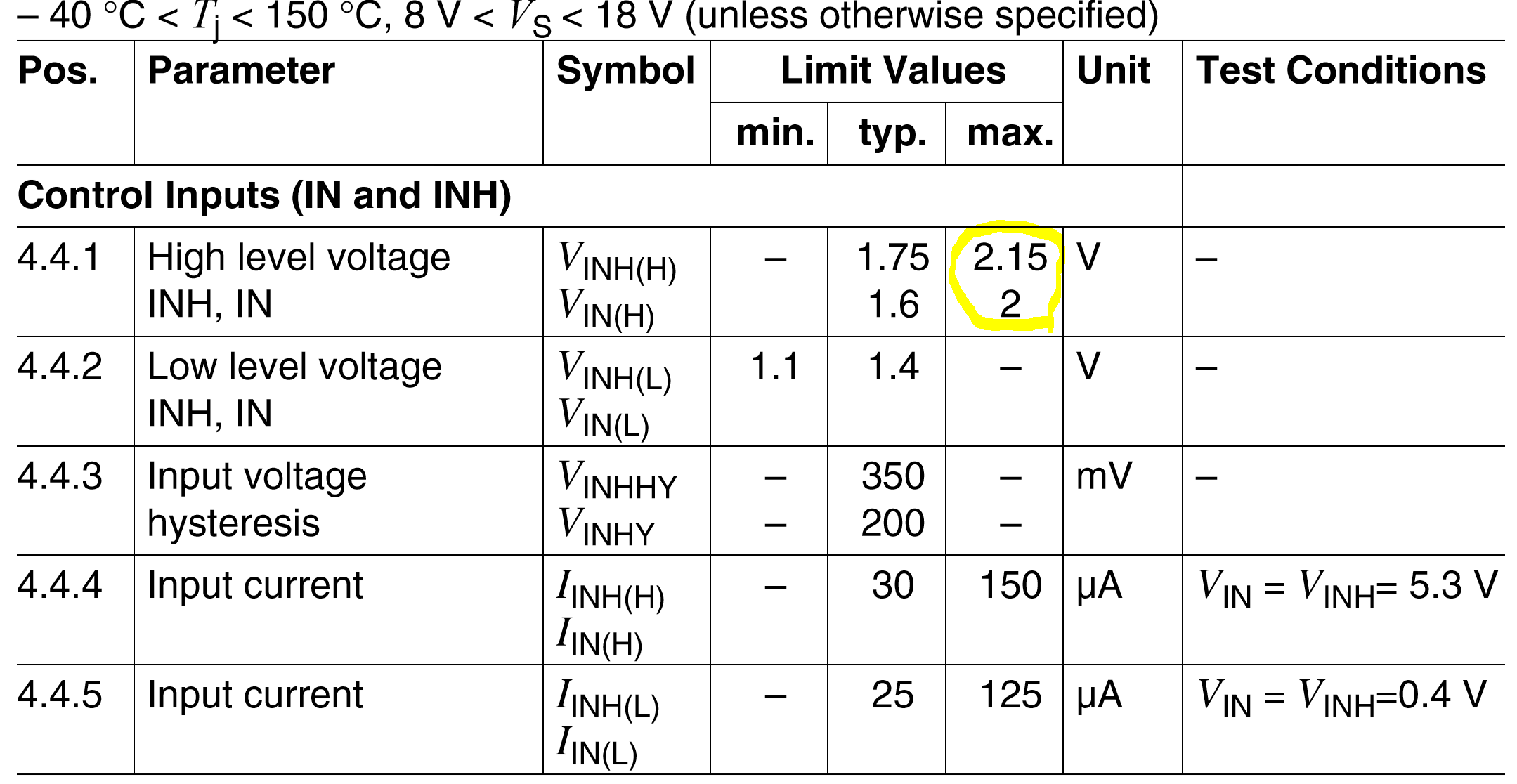 If you were to reduce the 74HC244 VCC to say 2.5V you would still meet this requirement, but the input high voltage levels from the Raspberry PI would drop to around 1.8V worst case. This does not reduce the load on the Raspberry PI I/O pin, but will tolerate an out of spec Vout(High) from the 'PI much better.

As another solution you could perhaps replace the 1k Ohm resistors with say 10k Ohm, this would reduce the current supplied by the Raspberry PI I/O pin and increase the voltage applied to the 74HC244 inputs.

For those that doubt the Raspberry PI DIO current could be a problem, here are a couple of pointers. The DC characteristics of the chips used in the 'Pi are poorly documented, but the DIO structure can actually be programmed to supply different levels of source current. First link, second link

I have no idea what DIO current levels are set for the different models of Pi but it is operating system dependent.

The I/O structure for each DIO pin looks like this: 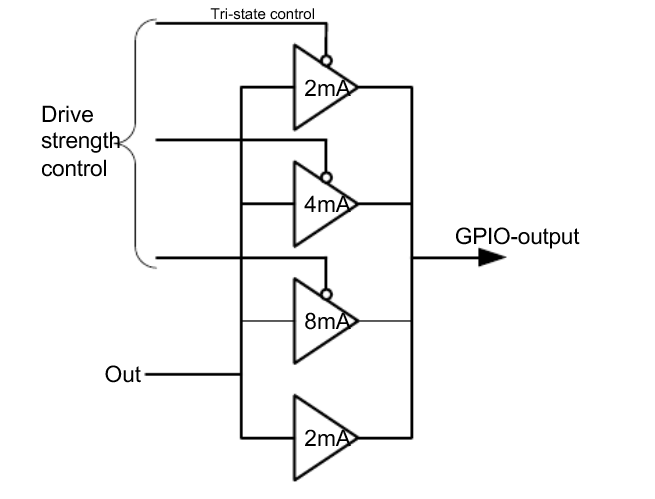 I finally pulled a 'PI 3B out of a project to test the GPIO ports. It is running the current Debian(Jessie) release.

The differences between GPIOs when you have a 1K Ohm pulldown is quite profound.

I did not have a 74HC244 so worked from what the datasheet presented as the Vin(High) voltage that would be required and measured the GPIO voltage with a multimeter.
The GPIOS seem to fall into two groups, those which have a single output pin configuration as a GPIO and those that have dual function (GPIO and some other function selected by configuration).
The group that are just GPIO (GPIO 5,6,13,19,26,40,38,36,32) have excellent characteristics with Vout(High) dropping only 0.05-0.1 with a 1K Ohm pulldown load. At a 412 Ohm load, this group dropped around 0.25-0.3V, but none were under 3.0V.

The dual function group of pins showed a much worse current source capability, with one of this group (GPIO 11) much worse than all the others.
Most of this group had a Vout(high) of less than 3.2V with a 1K Ohm (the actual value was 1100 Ohms) load. GPIO 11 was the worst with 3.14V. At 412 Ohm load most were 2.95V or above while GPIO 11 was 2.9V. (Please note here that the GPIO 11 pin source current is only 7mA, I did measure this further and at 10mA, this port collapsed to 2.6V)

From the above numbers we can say that the 'Pi (at least my sample of one) would be incapable of driving a worst case 74HC244 using a VCC at 4-5V (Vin(high) of 3.14V or greater). For a 74HC244 VCC of 3.3V, all of my ports would successfully drive a high signal for a 1K Ohm pulldown. Given I had one port that was significantly worse than the other, I would surmise this may occur with other 'Pis too. I therefore stand by the assertion that reducing the VCC for the 74HC244 provides better margin for error, though it's clear that reducing the VCC value to around 3V would be all that is required.

Not the answer you're looking for? Browse other questions tagged raspberry-pi h-bridge motor-controller or ask your own question.