Why does this MOSFET always turn on in saturation? 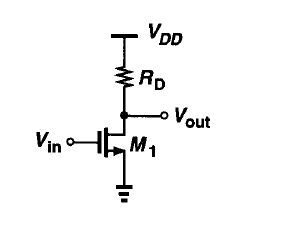 How does this prove that it will turn on in saturation? I mean yes we could probably prove that with the small-signal model, but there is no small signal here.

It seems, from reading the comments that there is some confusion with some members about MOSFET saturation (not to be confused with BJT saturation): -

In Razavi's book, it says that this MOSFET will always turn on in saturation mode.

And here we have some confusion - to say the MOSFET will **turn on" in the saturation region is misleading but, I don't have the referenced book so I can't be sure whether this is a mistake by the OP or a mistake in the book. Or maybe the words are not interpreted well...

So, maybe the author, if the quote was verbatim, meant to say that it will **initially* "activate" in saturation as the gate-source voltage rises past VGS(th).

I have seen the video Lectures of the Author in which he posed a problem like" prove that MOSFET will always turn on in saturation region, given VDS > 0 and you start increasing VGS from 0V."

Now this above statement can be easily justified as whenever VGS reach infinitesimal value above VT (VGS - VT< VDS ) will be satisfies for atleast short range values initially which will lead the device directly into the saturation region.

This is how I see it. When Vin = 0 the device is turned off and Vout = VDD (This point is important). So when Vin = small voltage = Vgs; Vout is finally something less than VDD. Now as you mentioned; Vout > Vin - Vth is the condition for to work in saturation. So when you are starting, Vin is low and naturally it can't cross the Vout as it's close to VDD, the supply voltage. That means, Vout > Vin - Vth because the difference between Vin - Vth is small.

This changes when Vin is large as Vdsat or Voverdrive (its nothing but Vin - Vth) becomes large and output is much smaller and the device goes into triode region.

1
Why do most N Channel MOSFET Circuits have the Source Pin tied to ground? + Circuit Question
8
Is the MOSFET source always connected to bulk?
1
MOSFET common source amplifier output impedance calculation
0
MOSFET - Derivation of I/V Characteristics - Small Vds
0
MOSFET Gate voltage
1
Why turn-on speed of a MOSFET is linked to diode reverse recovery time
0
Question about the MOSFET saturation condition
0
Why Gate voltage must be higher than source voltage in N-MOSFET as High side switch?
1
How does a diode-connected MOS device 'clamp' the voltage
1
ohmic state vs saturation state drain-source resistance of a MOSFET