I'm thinking about using the Allegro ACS712 current sensor for measuring house equipment current consumption (for example TV). The issue I'm facing is that my house energy supply is built around two 110VAC phases. My equipment works with 220VAC but not in Live-Neutral configuration, but in Main1-Main2 configuration.

Having the two connections "active" confuse me a bit... I don't know how to proceed. Should I use two sensors, one for each main? Should I measure only one cable? Will the equipment current flow from only one main or from both of them?

Any guide will be appreciated.

This image represents what I want to do: 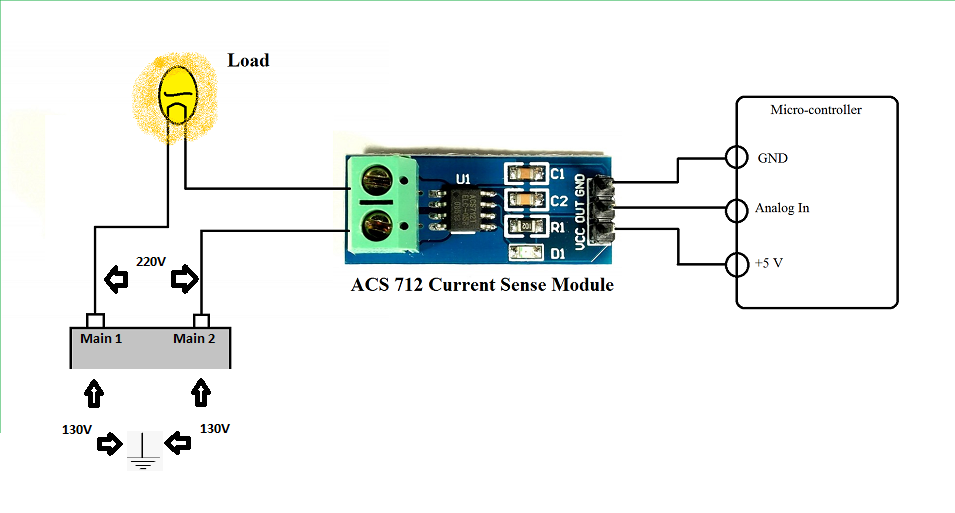 Also, the values you see stated were measured by my multimeter. Maybe this helps to sum up what I was trying to say and reduce confusion.

It sounds like you have a standard North American "Split Phase" electrical supply as supplied to most residential homes. As you mention: you have two "Line" connections plus a Neutral.

If you are trying to measure the current consumed by a single device, you need to have current sensors on the total number of active power conductors (Line & Neutral) minus one.

Based on your revised question, I would say that you need only ONE current sensor. It doesn't matter which Line conductor the sensor is connected in series with.

Not the answer you're looking for? Browse other questions tagged ac current-measurement or ask your own question.

1
How to use PIC A/D converter with ACS712 Hall effect current sensor
0
ACS712 Low Current Sensor
0
How are the individual homes connected in a 3 phase power distribution system (power grid) so that they have correct voltage?
2
measure Watts, given only Current in a single-phase AC system
1
Sense 230V - current
0
Measuring current using ACS712 interfaced with ESP8266