Car battery (lead acid) discharges much, much faster than it charges?

According to BatteryUniversity article BU-403:

The charge time is 12–16 hours and up to 36–48 hours for large stationary batteries. With higher charge currents and multi-stage charge methods, the charge time can be reduced to 8–10 hours; however, without full topping charge. Lead acid is sluggish and cannot be charged as quickly as other battery systems.

So the charging rate is no more than C/12. But car batteries (usually 6 cells) can discharge at often beyond 200A. 250A in my example. For a 50 Ah battery, this would mean discharging at a rate of 5C.

Does that mean, that a lead-acid battery can be discharged at least 60 times faster than it can be charged?

Or have I misunderstood something?

You are entirely correct. The issue comes down to the fact that it's pretty easy to overcharge a lead-acid, but normally you try not to "over-discharge". So you have to be careful about the last stages of charging. This is not (exactly) true for discharging, but that is only true because you don't want to completely discharge lead-acid anyways. Unless you have a deep-cycle battery, you don't want to pull more than about 50% of the available charge out when discharging. If you do, you'll severely reduce the battery life.

You said '..a lead-acid battery can be discharged at least 60 times faster than it can be charged?" In general that may be true of a particular charging system, but it varies depending on the charging system and the charge profiles used.

Your premise is far too simplistic to cover all situations. Battery University presents quite reasonable information, but it does not usually provide highly accurate technical details that cover all situations. The main premise of the statement in BU-403 you referred is to "Learn how to optimize charging conditions to extend service life". But the charging profile presented is only one of many possible options.

If you read relevant information on smart charging profiles you may get a better picture of the situation. Start with something like this from TI.

If you want in depth detail for extending battery life you may find this paper on VRLA EV use of use. This uses a ZDV profile to ensure the minimum of overcharging, but maintaining fully charged terminal voltage.

For use in boats and RVs, I've seen C/5 recommended as a maximum charge rate, but lower rates are probably kinder to the battery. For marine and RV use, you want to charge the battery as fast as practical (without damage), but for stationary use (UPS and similar applications), you usually have lots of time between discharges, so a slower charge rate is practical.

In short, you are right, batteries can discharge faster than charge. But in terms of efficiency of use, the matter is not the same.

The way the question as initially done does not consider some very important topics, as battery is essentially a (rechargeable) source of electrical energy. These are some relevant points to consider:

Most of this questions I have already answered in this post #1, but I will present some discussions here, using your data as an hypothetical example:

A safe charging current is limited to 15%~20% of C during the bulk charging stage, as I illustrated in this other post #2, on the first picture.
So, I.ch < 10A.

For an AGM SLA battery a safe continuous discharging current is 3C. The AGM data I found in that post had a maximum intermittent (5s) current of 15C, where the CCA (discharging for 30s) was about 55% of that absolute maximum, or CCA = 8C, when maximum continuous was 3C.
On the other hand, your (hypothetical) battery had CCA = 5C. I would then guess this is a deep-discharge battery with no further data available.
In this case, my guess for the maximum continuous discharge current would be 3C/8C x 1C = 18~20A.

Obviously, you could discharge at CCA = 250A, but just for up to 30s and the voltage would drop as low as 7.2V.
It can be useful for a cranking motor running for 10~20s, but to use it to power an inverter, probably the electronics would disconnect sooner, by 10V. Please check that first link (#1) for further details.

When discharging rate become less efficient?
From the Graph on Figure 2 of the post #2, it seems that discharge rate should be limited to C/5 or the battery will loose actual capacity “%C” more drastically.
Again, extrapolating that manufacturer’s data to other batteries - until we have more exact data, it is the best guess we have.

A curious observation from the available data:
Both continuous current limits - the maximum charge current and maximum discharge current are the same, 10A = C/5.

Recharging by the car’s alternator:
As the battery may be in a car, alternator will recharge promptly, topping off with 10A~20A (or more) along several minutes (or hours on a trip), with variable charging capacity mostly due to engine’s variable speed/RPM, until voltage reaches nominal about 14.4V.
As a general estimative, for every Hour with I.ch = 10A, the alternator sends “12V” x 10A x 1h = 120Wh nominal, somehow recharging in 1h @ 10A the energy used in that long engine cranking of 30s. Complete charging time may be shorter if maximum initial charging current is higher and if actual cranking time is usually as short as 5~10s.
The actual charging voltage is indeed higher (13.x up to 14.4V), but here I assumed it being used to compensate the electrochemical inefficiencies; that is why I used the same nominal 12V.
The exact charging voltage is compensated by the ambient temperature - this alternator regulating IC has a graph illustrating the Charging Voltage versus operating temperature: 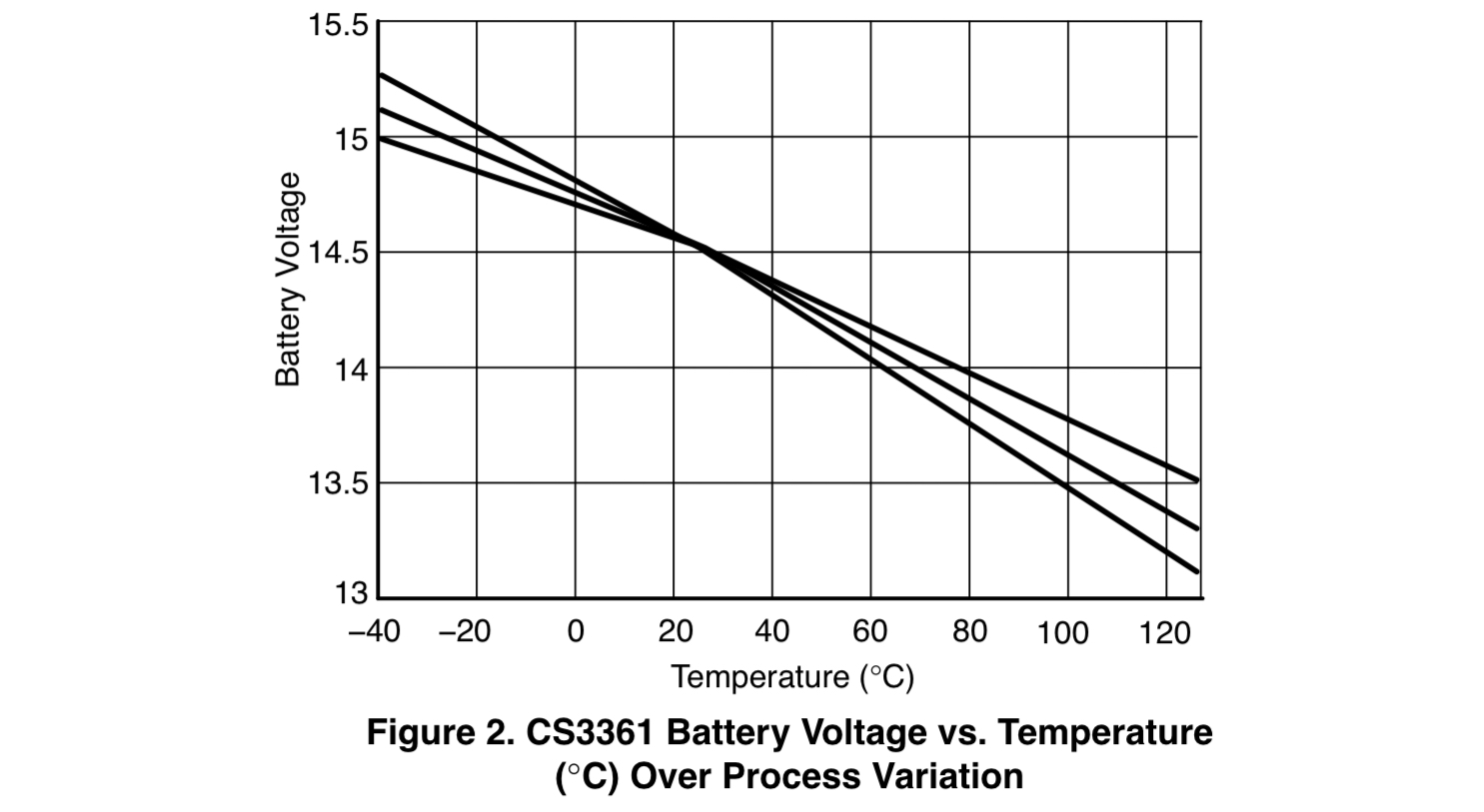 How a car battery is charged by an alternator-based charging system?
I found an interesting article discussing several details about the charging in more realistic situations,as variable rotation speed (RPM). Here is a collage of some figures in this article, where the colored curve graphs represent charging system response varies significantly along different engine speeds - 750 rpm, 1500 rpm and 3000 rpm. 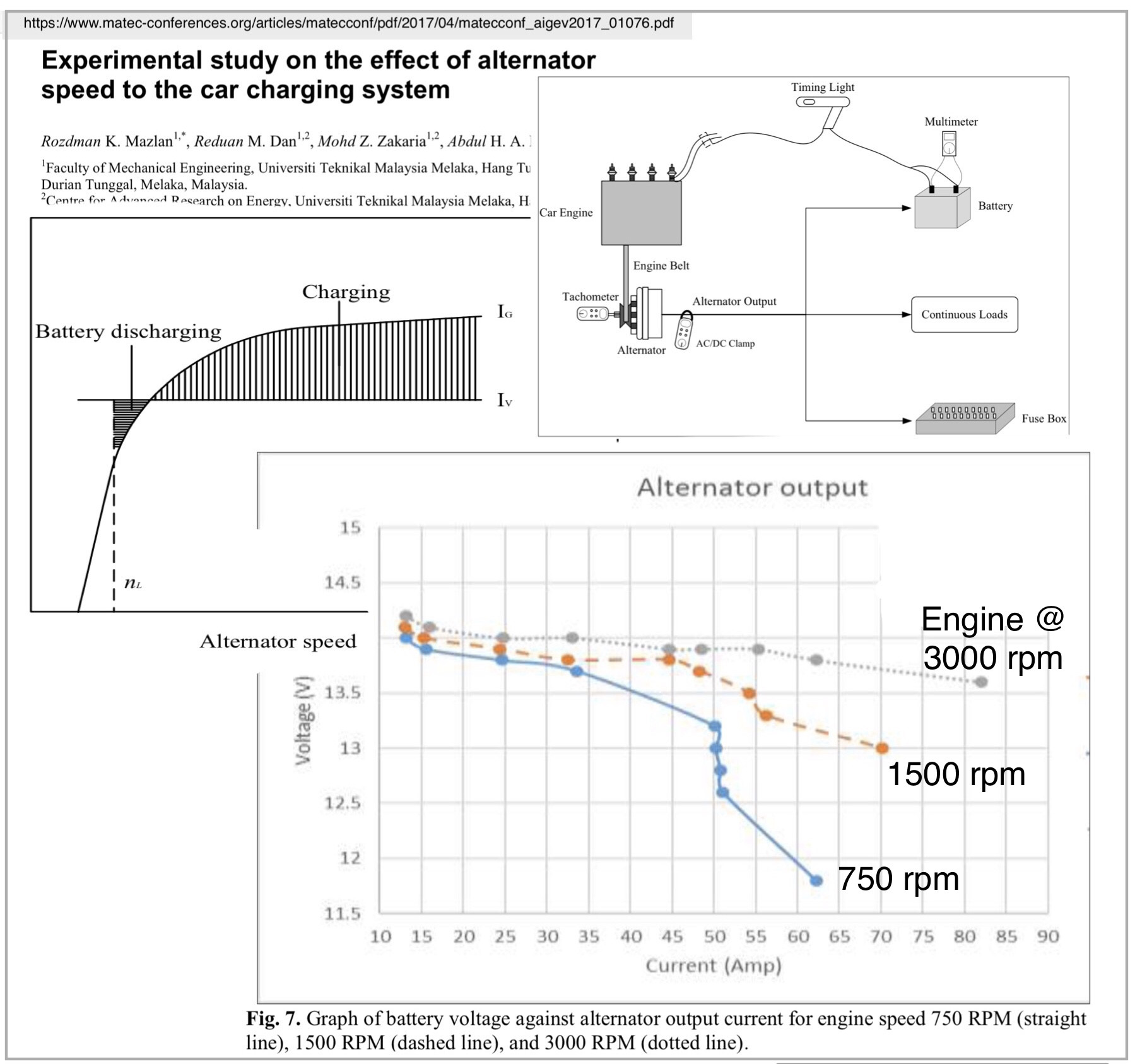 Not the answer you're looking for? Browse other questions tagged batteries battery-charging automotive lead-acid or ask your own question.

3
How to attain a topping charge for a lead-acid battery?
1
Safe Continuous Discharge Rate of a Car Battery