Which is broken, the amp or the driver of this subwoofer?

My subwoofer (with an internal amp) is showing difficulty reproducing low frequency sounds (sine 30Hz ~ 70Hz). As I lower the frequency, around 70Hz, I start hearing very slight distortion (hint of buzzing instead of pure sine sounds). At 30Hz and 35Hz, the distortion becomes more like a fluttering sound.

Its service manual is here:

Originally (last year), the subwoofer started making a crackling noise after being warmed up for 10~15 minutes. I changed some power resistors, a capacitor, and two transistors. In the process, I shorted the circuit at least once, so it's quite possible that I damaged some components. There is also a distinct possibility that the driver (12") may have been damaged (due to hard-driving) and cannot reproduce the signal the amp outputs faithfully. The original crackling noise seems to have disappeared.

I have collected some data (measured and plotted) in the last several days. I'd appreciate it if people here can look at them and post their opinions whether the amp is definitely NOT working right or the amp is probably OK and the driver is the most likely cause of bad sounds. (Again, sine waves above 70Hz sound fine, both in volume and purity.)

The reason that I didn't try increasing the levels 9 and up with the 9.2-ohm dummyload was that the amp started making a faint clicking noise, which I assumed to be the sound of the amp's current limiting protection kicking in. I could increase the limit by adjusting one variable resistor. 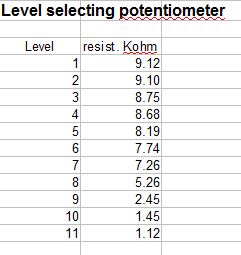 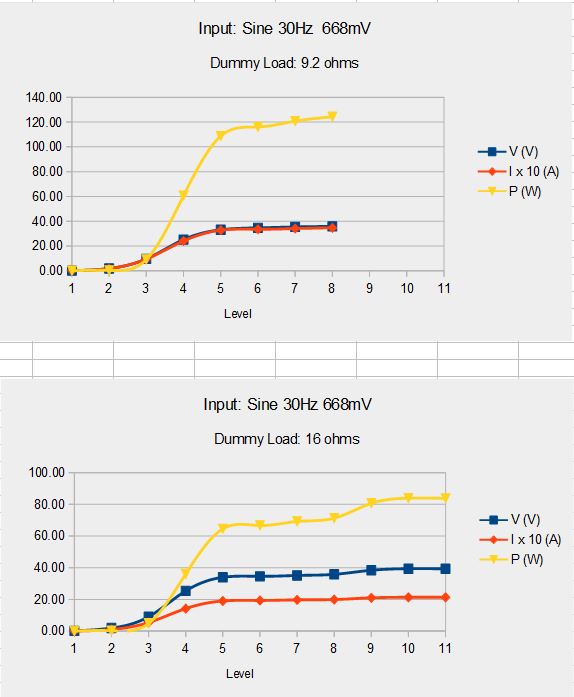 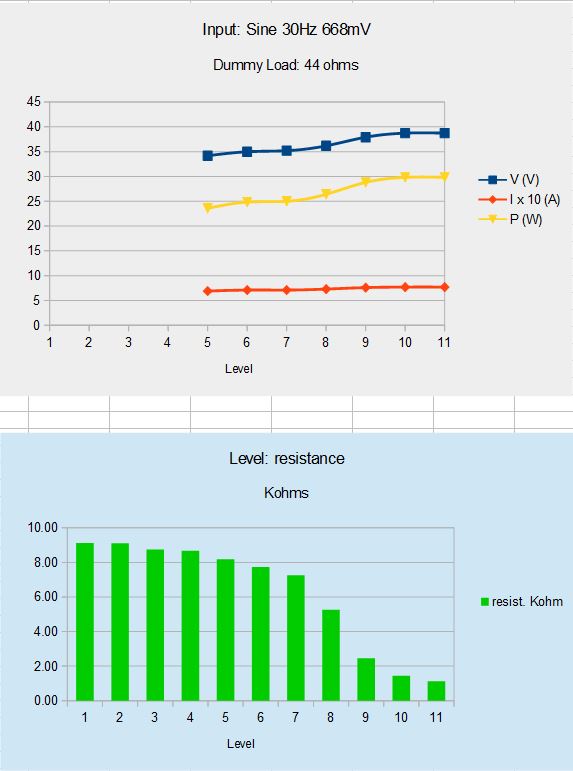 The following are waveforms of the output of the subwoofer's amp that as displayed by Soundcard Scope: 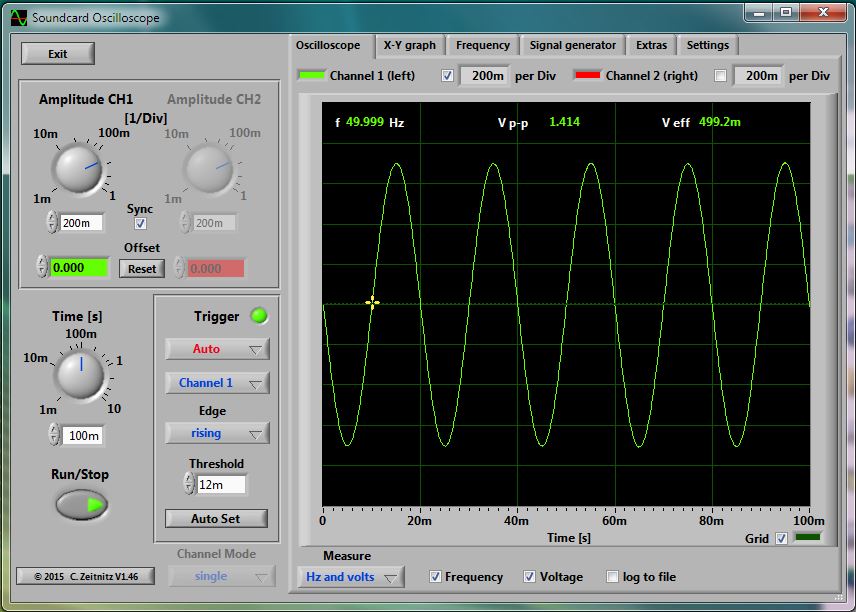 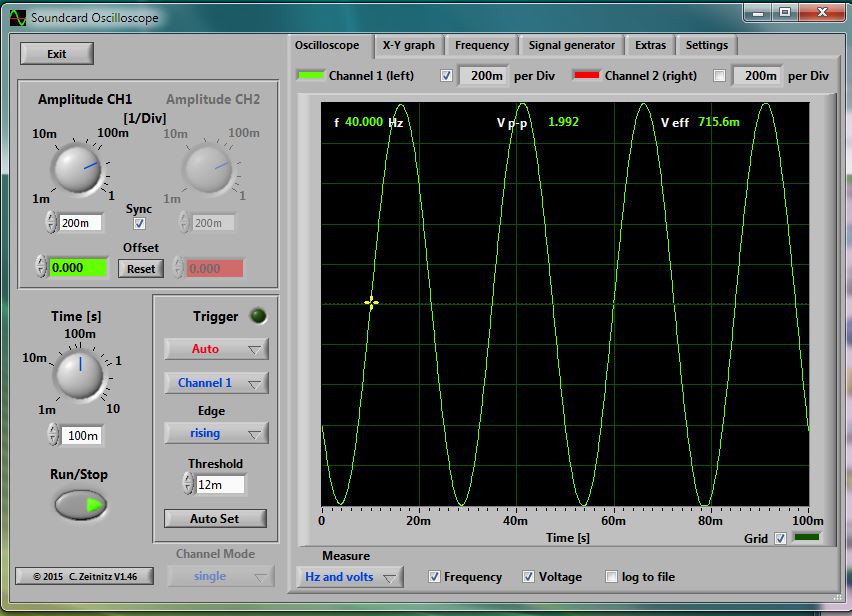 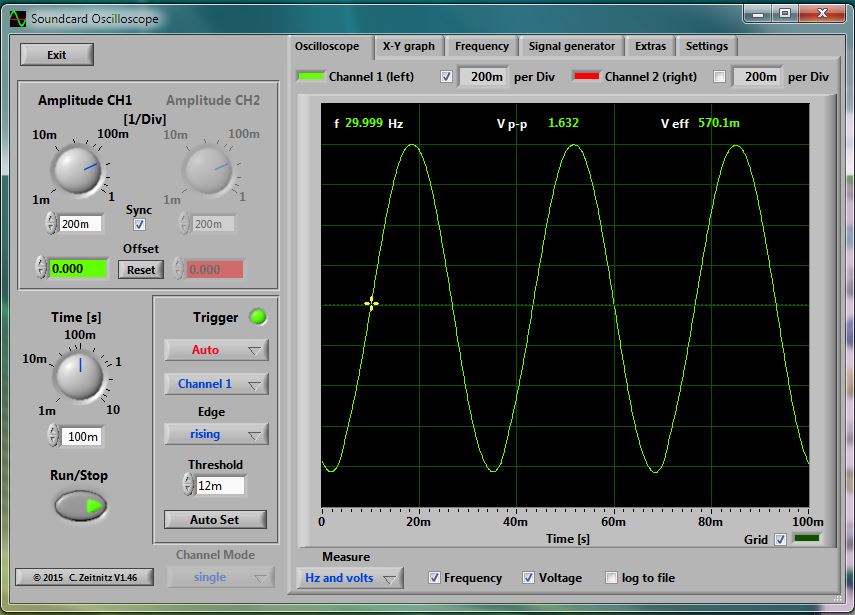 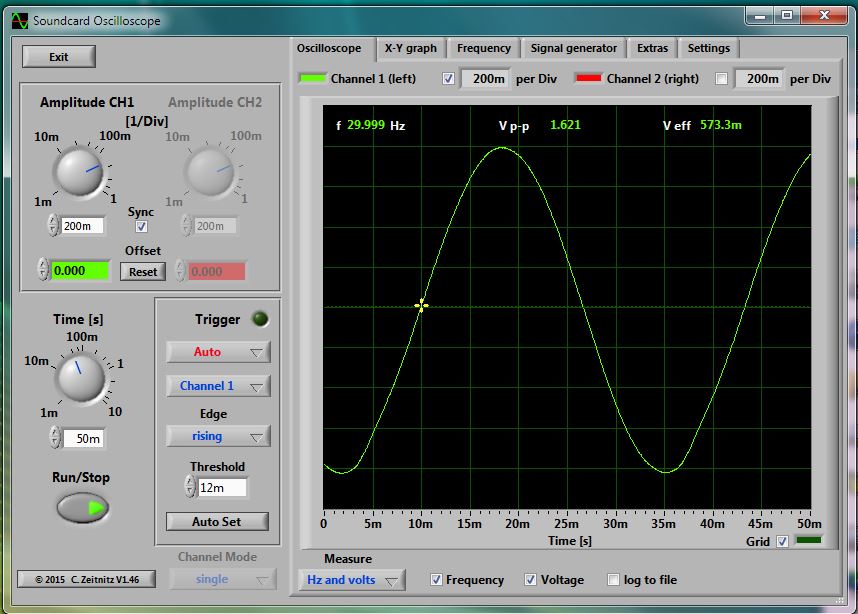 To have Soundcard Scope (soundcard based oscilloscope) display these waveforms, I had to reduce the input level from 30~40Vrms to to less than 100mVrms, using only three resistors without potentiometers or diodes. In the pictures, voltage numbers are just relative, not absolute, the max being 1.9 or so. The input signal strength fed to the subwoofer's amp was about 668mV. The THDs calculated by Soundcard Scope were mostly less than 1% for all frequencies tested except for the worst being at 30Hz, still less than 2%.

For these measurements, instead of dummy loads, I connected the original driver and fed sine waves ranging from 25Hz to 120Hz. I also fed the signal (off the driver terminals) to Soundcard Scope and took screenshots for some frequencies. With this driver, the sine waves at 25Hz and 30Hz definitely show serious distortion.

I include a table showing the THD for this setup at various frequencies as well. As before, P is calculated using the formula P=VI. Impedance is calculated by the formula R=V/I. (I don't know if this second formula is meaningful, however.) 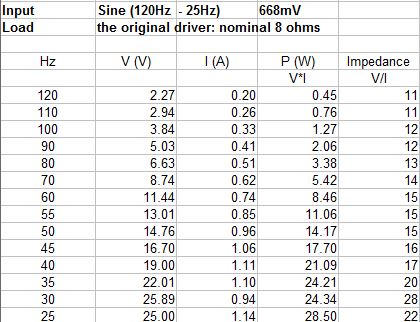 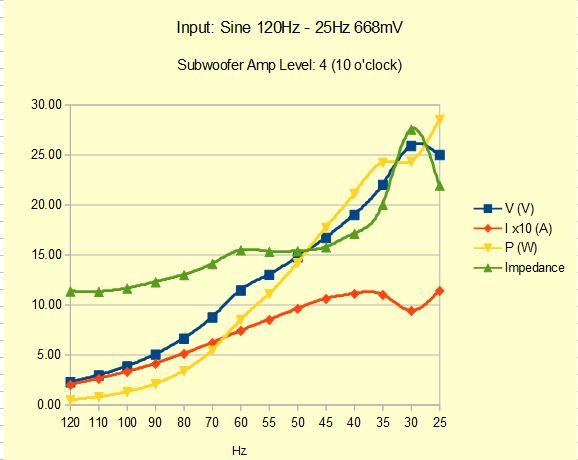 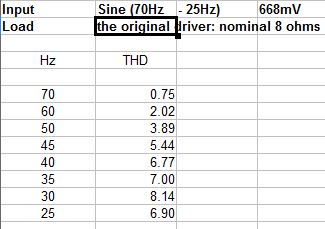 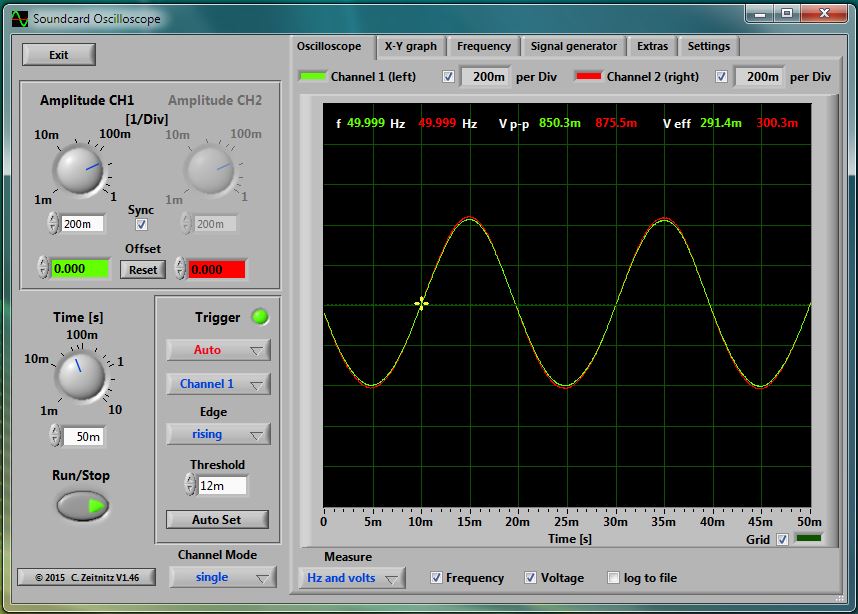 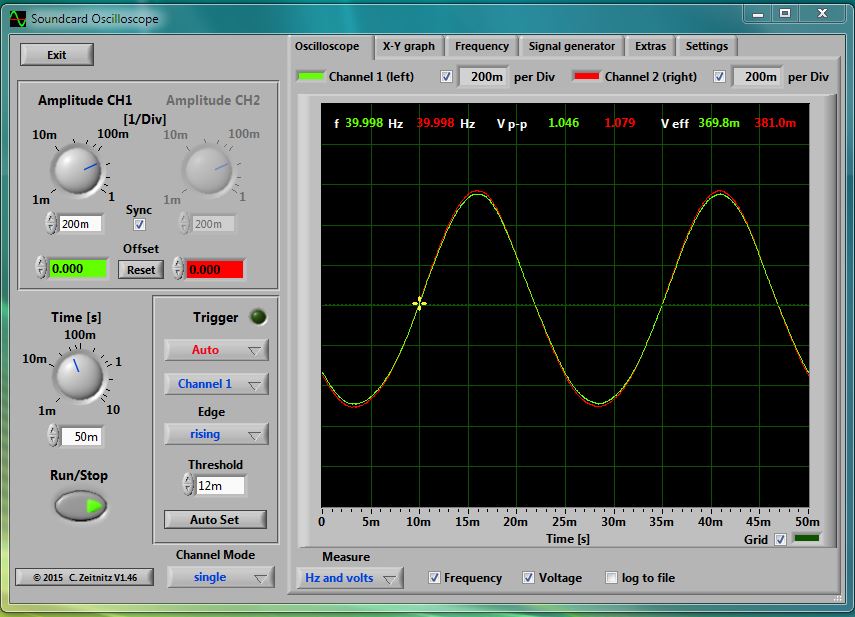 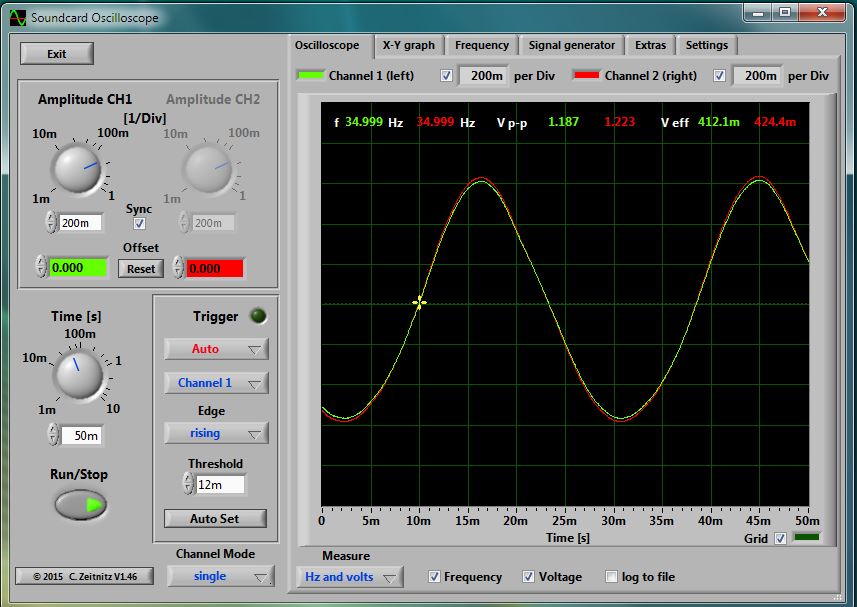 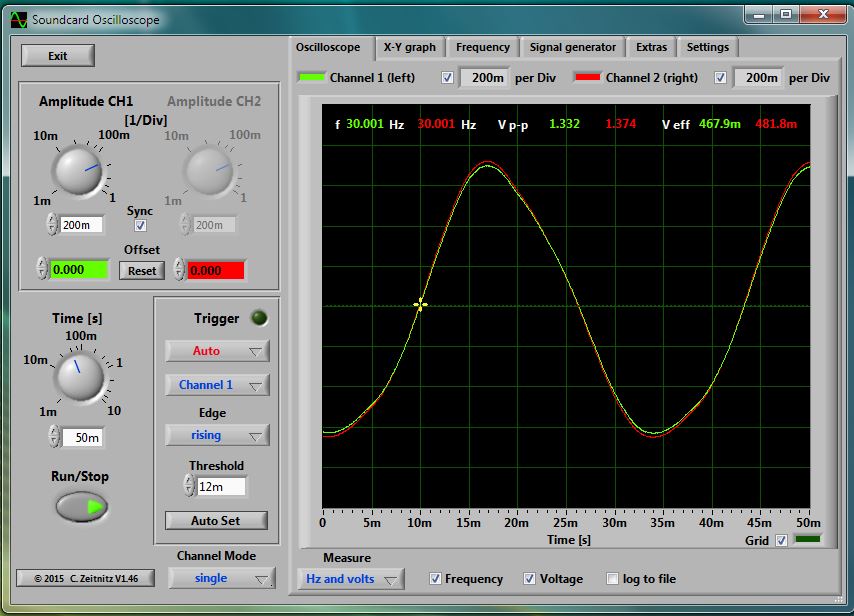 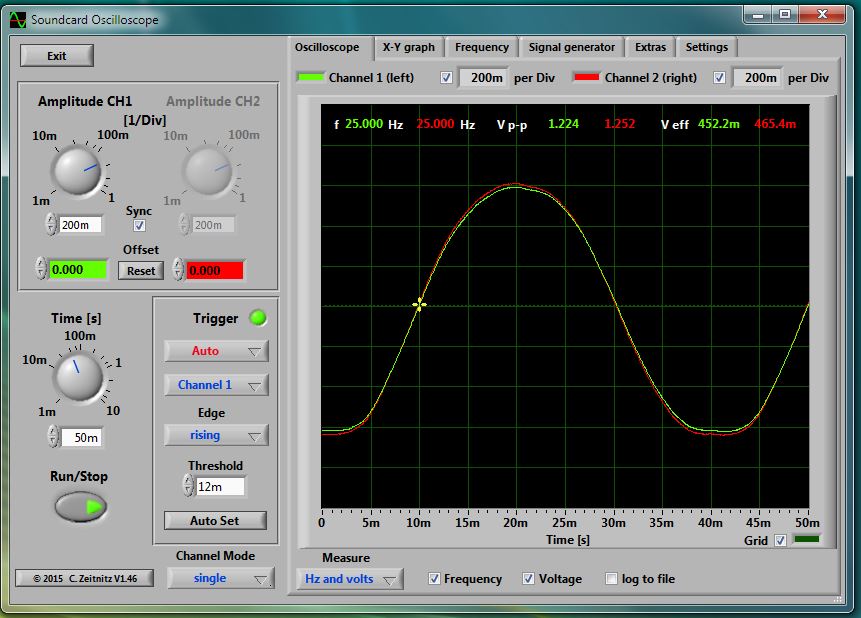 Even though the waveforms at 25hZ and 30Hz clearly show distortion, I don't think this level of distortion causes the noise I think I hear. The noise is like paper flapping. Also, with a real driver (instead of a dummy load), some alteration of the input signal may be expected because its voice coil generates some electromagnetic force. (Just guessing.) The limitation of Soundcard Scope and soundcard-based oscilloscopes is something that needs to be considered, too.

Do you think we can conclude that the original driver is broken and needs to be replaced?

Or is there something seriously wrong with the amp? Like 6db boost at 30Hz, low pass filter, etc.?

Any opinions or comments are appreciated. Thank you.

The output from the amp looks fine.

In terms of the current protection - most audio amps cannot drive a sine wave at full power for very long - typically music power will be like 20% of full power in terms of actual power, this is why the PSU transformers will usually be rated lower than the max power output. The same will probably be true for the heatsinking to some degree - I suspect this might be why the limiting is kicking in.

I definitely sounds like there is a speaker problem.

I would do the following:

Speaker cones tend to buzz then the windings rub the magnetic core or when cone is ripped. **

The is most likely from speaker damage. But I don't recall if the speaker buzzes at this level or much higher.

If the voice-coil is misaligned with a gap of <<1mm , max excursion at the lowest frequency can cause winding buzz or whooshing from cone damage to the neoprene or cone suspension. If torn this can result in uneven suspension bias and cone tilt causing the some friction.

The Amp has a bass boost set to +3dB at 30Hz with total harmonic distortion (THD) visible and rolls off sharply at 25 Hz with even more THD visible flattening towards squarish.

The Amp could be improved and could be the cause if this were tested at normal listening levels but if this voltage produces buzzing it's the voice coil or suspension ring that are visibly damaged perhaps the braided wire interfering, or torn.

example of your frequency response and THD

Due to the Fourier Series, comparing a sine to the extrapolated triangle is a fixed ratio of ~ 70% Vpp. When this ratio reduces, it means harmonic distortion has started to attenuate the peak due to squarish response, by adding harmonic content. The 25 Hz has reduced to ~50% rather than 70%, meaning that THD has begun at this low power level. This is chiefly caused by the PS cap ripple. It may get much worse at max power level. 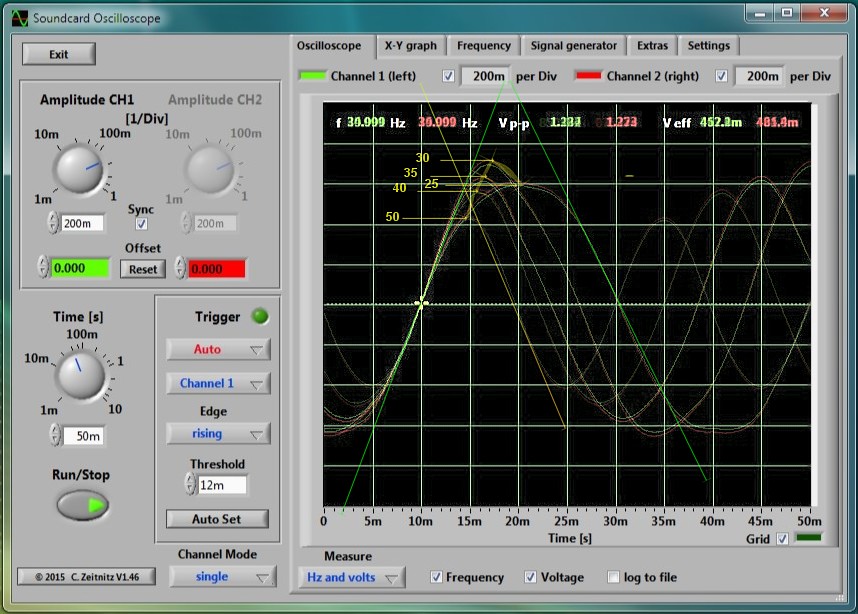 ** Some may know the phenomena or have your speakers buzz from mobile phones when syncs up to tower . dit-da-da-dit repeated every 5 minutes or so, when placed near the speaker coils in a car door or on a PC. They resonate the chirp burst RF and cause an EM response and in some cases a radial motion instead of axial one. This temporarily brings the coil closer to the rigid magnetic parts, meaning not only can you hear it with the power off , but it buzzes much easier as the coil touches the magnetic assembly.

Not the answer you're looking for? Browse other questions tagged amplifier audio impedance speakers distortion or ask your own question.

1
Subwoofer LEDS - RGB, brightness controlled by amp
0
Audio amp testing: is this safe?
1
Setting the bias for the power amp section of an audio amplifier?
0
Onkyo subwoofer amp, disable automatic power toggling
0
Audio amplifier alignment procedure questions
1
What causes a voltage drop at the input of this TL082CP Op-Amp?
0
How can I identify specifications for this possible passive speaker with subwoofer? And what are each wirings on that cable for?