I know that a semiconductor material, that is usually used for heaters in variety of application, heat up due to high current, which flows through them or high power dissipation across them.

But lets say that some material is going to heat up for more than 400°C if some voltage is applied to it, and also a high current flows through it. But what about the supply cables that are connected to nodes of heater material - shouldn't the heat up for the same amount of °C? I mean, as that high current flows through the load (heater) it must flow through the supply wires also, right? But in real life cables/wires don't heat up as much as the load, that is used for heating up something.

A good example is a welding machine - cables that supply all that high current and high voltage definitely don't heat up as much as a contact point, where material is welded.

This refers to the most common type of semiconductor heating cable I've installed, self regulating heat trace. A variety of temperatures are available but the bulk I have seen is used to prevent lines or devices from freezing. 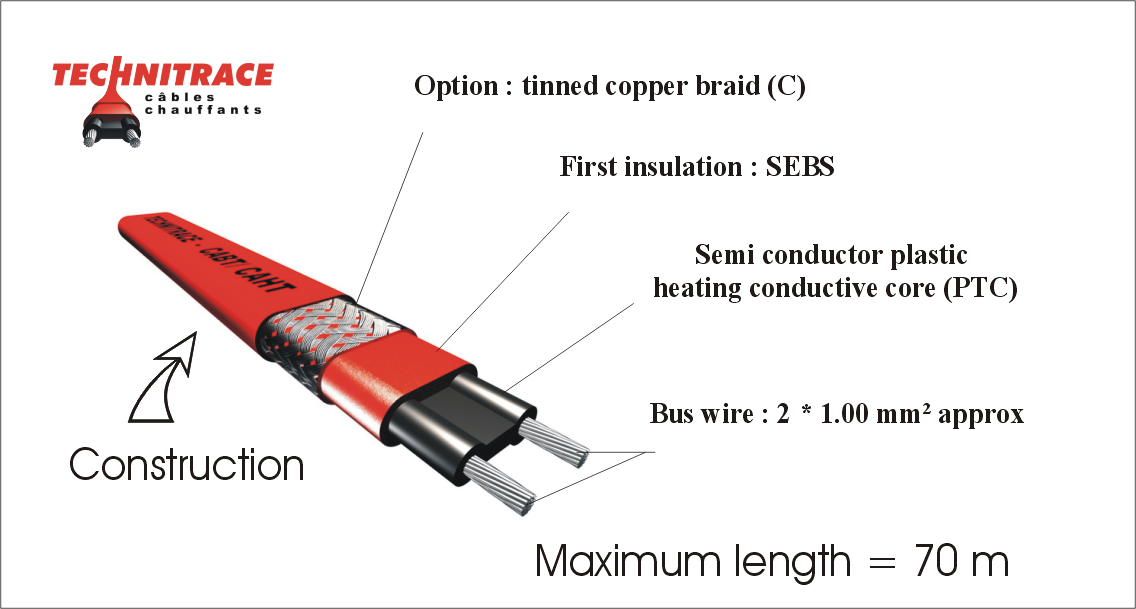 You can see from the image that the cable is composed of two tinned copper bus wires of low resistance connected by a body of semiconductive plastic, and then a number of protective/insulation layers.

Different materials have different resistances per cross sectional area or resistivity, and a larger wire will have lower resistance given the same material. Power dissipation(\$P\$) is equal to current(\$I\$) squared times resistance(\$R\$) or voltage drop(\$E\$) times current, or in formulas:

by controlling where the resistance is, you control where the power is dissipated, and that control is the function that auto regulating semiconductor heater cables perform for you.

The semiconductor is chosen based on the desired regulation temperature to have high resistance at or above that temperature, and lower resistance the farther below that temperature it reaches. The advantage to this setup is that the cable is able to provide differential heat only where it is needed across its length. You can take an outdoor rooftop plumbing line that passes through multiple different ambient temperatures, run a single cable along the entire length of it and insulate it. Because the cable produces heat only where it's needed, you don't have to be concerned with doubling it up or overheating the portion that is in a warm environment. You can also keep the cable hooked up year round without active control of the circuit because during times when the temperature is high, the semiconductor resistance is high and very little power is dissipated. For critical building function, they use no more power than is necessary(in this use case) to keep the pipe from freezing, and thus they minimize the electrical load on a building UPS or backup generator.

The low resistance backbone cables dissipate very little power, and just get the current to the places where the semiconductor is cold enough to have lower resistance. They still have some power dissipation, especially when a cable is first turned on in a colder-than-setpoint environment and a current surge occurs, but they are sized so that their power dissipation will be insignificant compared to that of the semiconductor once it has reached normal operating temperature.

The current increases proportionally to the decrease in resistance, but the power dissipated increases by the square of the current, so the device reacts aggressively to maintain its temperature. A 10% decrease in resistance will result in a 10% increase in current and a 10% squared increase in power dissipation. This means that the farther below its setpoint the cable is, the more quickly it will heat back up to its setpoint.

I've been looking for a graph that shows the semiconductor resistance "knee", but haven't found one yet, but hopefully this improves the answer for now. 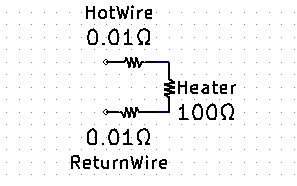 Not the answer you're looking for? Browse other questions tagged heat high-current power-dissipation or ask your own question.

21
Is it possible to calculate how much heat dissipation and temperature rise will take place in a resistor
0
Using a transistor as a heater
2
Is a relay with a 20 amp rating enough to handle the current from a residential hot water heater?
0
what is critical in handling Heat dissipation of mosfet - Source or Drain!
16
Why does only the tip of the electrode melt when arc welding?
0
Heating resistor power limit
0
The Relationship of Power and Heat to Length of a Folded Resistor
0
Lower duty cycle less efficient?