Consider the following circuit with two OR gates: 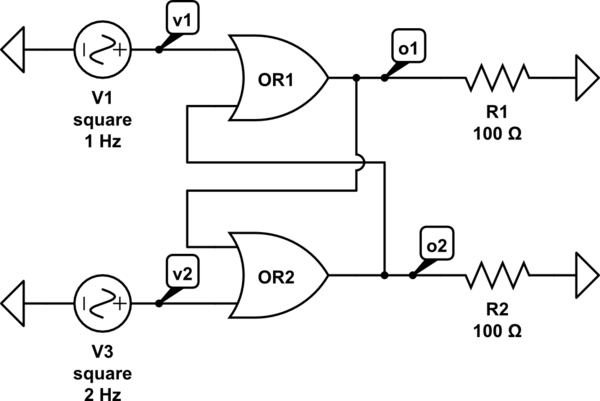 The OR gates with both inputs 0 generate 0, and after one input is set to 1, they remain with 1 as long as there is current. The circuit has memory.

Now consider the implementation of OR with diodes (let's call them diode-ORs): 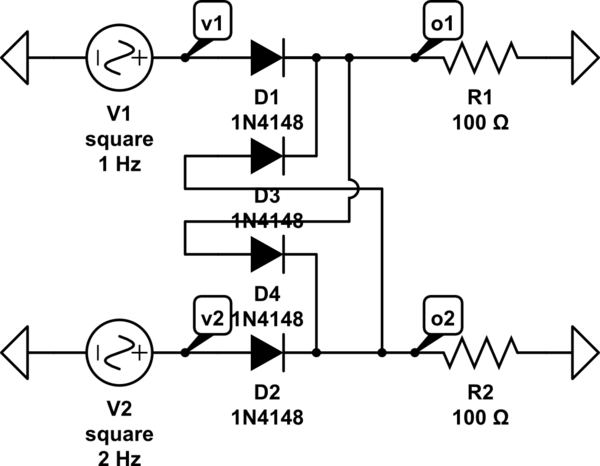 In this case, the diode-ORs always generate a 0 whenever both inputs are 0. The circuit has no memory. And there is a loss of voltage, that would accumulate if more diode-OR gates were cascaded.

My question is the following: is there another implementation that behaves like diode-ORs (i.e., without memory even in the presence of feedback loops) but does not have a cumulative voltage loss (or has only a very small voltage loss)?

Or put another way: can we replace each of the two diode-ORs by a circuit so that the whole system behaves the same way, except that there is no cumulative voltage loss (or the voltage loss is very small)?

Dave Tweed suggested to use a "better diode" and that is a correct answer to the question. Is there any other alternative? A problem with that solution is that it cannot be used for the AND case, which I would also like to handle in that way (with low voltage drop, and without memory even in the presence of fededback loops) because diode-ANDs have memory when there is positive feedback (https://en.wikipedia.org/wiki/Diode_logic#/media/File:Diode_AND2_Ideal_Diode.jpg).

I am a computer scientist and I am interested in the answer mainly for theoretical reasons and for teaching purposes. I know that the feedback loop is not needed to generate the outputs of the circuit.

My question is the following: is there another OR implementation that behaves like diode-ORs (i.e., without memory even in the presence of feedback loops) but does not have a cumulative voltage loss?

This is logically impossible.

The expected behavior of an OR gate is:

So, suppose that we have an OR gate (any OR gate) whose inputs are A and B, and whose output is C. Suppose, also, that C is connected to B. We then bring A HIGH for a while, causing C to be brought HIGH as well. Then:

From the above, we can see that the output of this OR gate will remain HIGH forevermore.

Maybe I have used the name OR gate incorrectly, but then just delete the word OR from the question and then there is no logical inconsistency any more: is there another implementation that behaves like diode-ORs (i.e., without memory even in the presence of feedback loops) but does not have a cumulative voltage loss?

Sure, absolutely. Take an OR gate and then alter it by adding a timer which forces its output LOW once every ten seconds. Then this resulting OR-like device does not have memory in the presence of feedback loops, and it doesn't have a cumulative voltage loss, either. But I don't know whether or not this implementation meets your expectations.

Consider your diode circuit: when the inputs are both zero volts, where would the energy come from to maintain an output at anything other than zero volts?

The "real" or "traditional" OR gates have an implicit supply voltage that will maintain the state of the outputs. Simulation tools sometimes "handwave" this away so as to not clutter up the schematic with unnecessary supply connections. 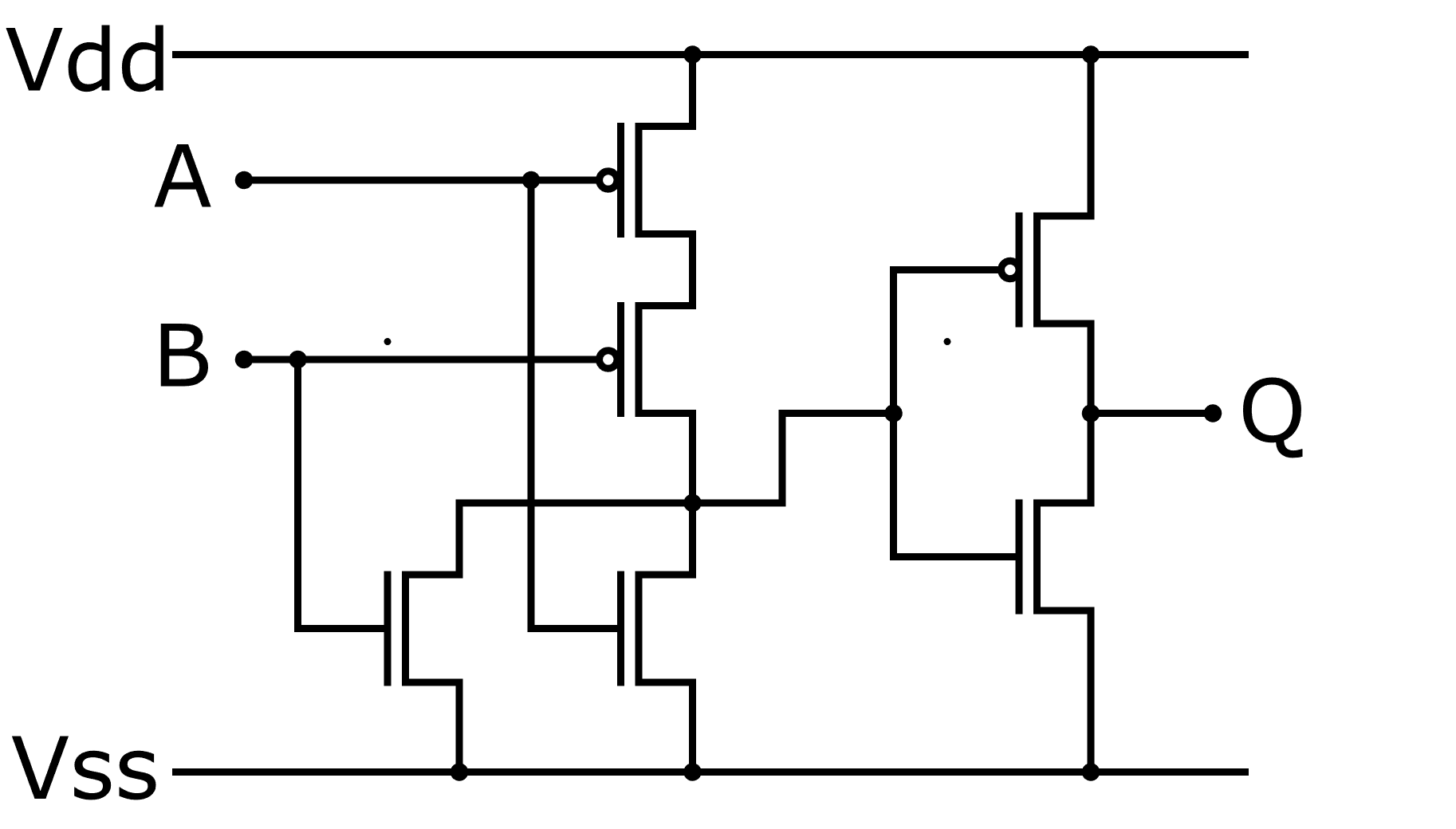 In this circuit, the circuit elements that comprise the OR gate are powered from VDD, and thus can provide power to the output Q. In your diode circuit, there is no such power supply, and thus no latching, or as you put it, memory.

There isn't really any feedback in your second circuit. D3 and D4 are simply cross-connected between the two outputs. When both inputs are high, both outputs are one diode drop below the input voltage, but if either input is low, the corresponding output is two diode drops below the other input. If both inputs are low, both outputs are low, because there's no other voltage source.

A logic gate amplifies the input signal. If you feed back the non-inverted output signal into the input, the output overrides a weak input signal and thus, the circuit has a memory.

Consider a similar schematic, only consisting of an amplifier with positive feedback. The resistor is placed so you don't "short circuit" input and output. In a logic gate, these are internal parts that separate the multiple inputs 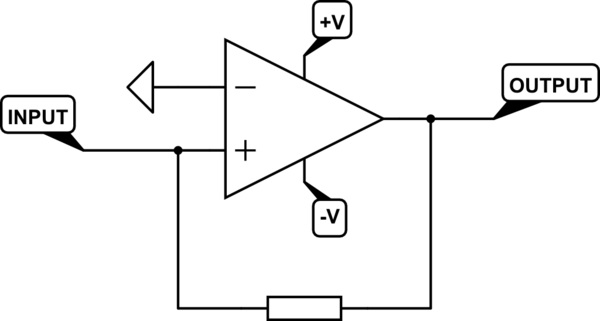 This circuit has memory. If you connect the input to +V, the output goes to +V, and through the feedback loop, it stays at +V if you let the input float again. And the same for -V. (The switch voltage is set by the amplifier - input connected to GND.)

So, the answer to your question is simple.

Because that's a by-product of amplification.

1
Is it possible to build memoryless logic gates?

0
Minimizing AND gates in ANF
2
Logic gates that does not need to to tie to 1 k resistor and ground open inputs to drive it low
1
Minimum number of NAND gates to implement f(x,y,z,w)=x(y+zw)+yz'
0
How can this logic be formed by using the Karnaugh map?