I'm writing to make sure my process is correct in this design. I'm going for a standard 4 layer board with layers 1 and 16 as signal layers, and layers 2 and 15 as VCC and GND layers respectively. I have filled layers 2 and 15 with the necessary polygons and names them to match the schematic. My only question really deals with the design of the layers and the use of vias (see picture). Is this the best way to accomplish my goal here? I am dealing with a relatively dense circuit as size needs to be kept down (insect cybernetics). Could I get some second opinions? This seems to be the best design.[

I want to be able to connect to the vcc and groun planes from the top level only. This setup has allowed me to select the layer combinations I was looking for with my vias.

After reading what ThePhoton says I tried a new approach by eliminating the blind vias and instead using a more conventional 4 layer board setup.

And for via settings I simply renamed its net. Will this give me the desired effect? 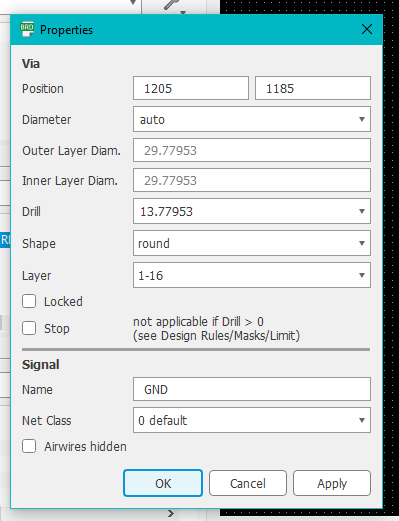 Though you already got your answer:

Better 2-layer PCBs are made of fiberglass mats soaked with resin. The resin is hardened, the whole thing is plated with copper, and you have your raw PCB.
During production of an actual board, it is drilled two times: First for all vias an through-hole component pads. They are then chemically plated with metal to make them conductive. Second, at some time after the plating process to make mounting holes etc without plating.

A 4-layer PCB is actually two 2-layer PCBs (cores) glued together by an other layer of soaked fiberglass (prepreg), which is hardened after. This is what your pictured show: Two green cores with the prepreg inbetween.

It is easily possible to create vias from one side of a core to the other, as this is the same as for 2-layer PCBs. But it is costy, since it is an extra step in production. But it is very difficult to create vias through a core and a prepeg, bu not the next core, as the second via style in your image shows. One had to drill to a certain depth into the board, and plating a blind hole is difficult to impossible.

Finally, it is much cheaper to have normal vias going through the entire board, and many manufacturers, especially pooling services, only offer these vias.

There are also very few manufacturers which etch a center core, apply a prepeg on both sides, plate it with copper and then etch the outer layers. And more-than-4-layer boards are made alike. This has different constraints for vias, but you got the point.

For designing in EAGLE:

Not the answer you're looking for? Browse other questions tagged pcb eagle layers or ask your own question.