I need to drive a large seven segment display (segment length is a about 2 inches) using a micro-controller (PIC 16F877). I've driven normal seven segments directly from PICs without issues, but I found that 5v is not enough to drive this one. It needed something around 9 volts (is this normal?)

So what came to my mind is this. (Designed using Proteus ISIS 7 Pro) 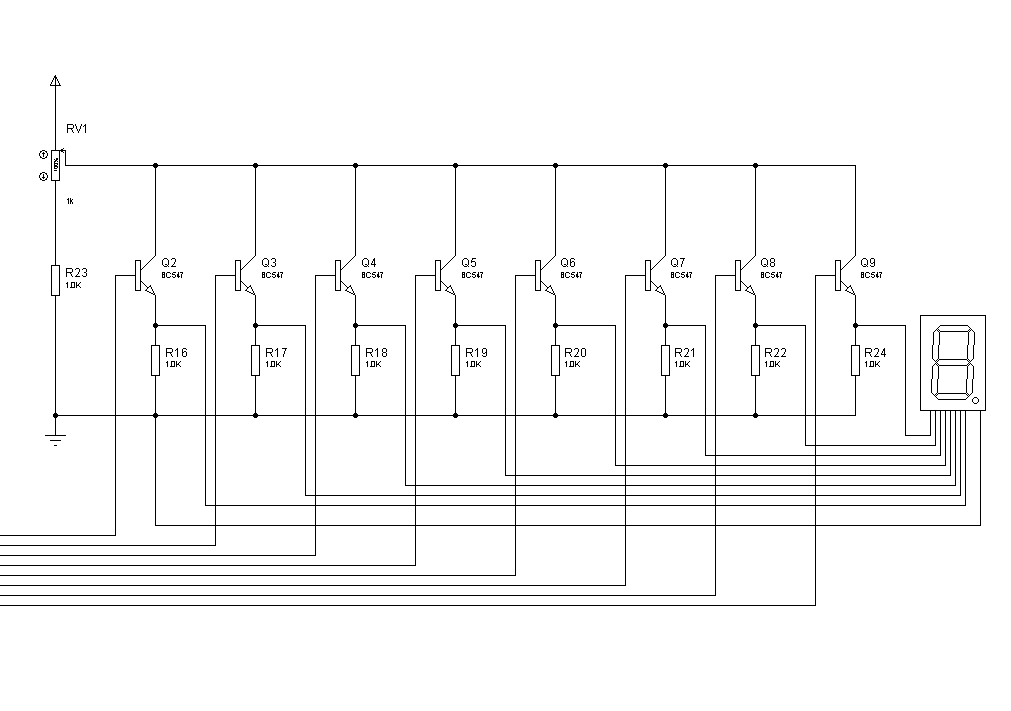 I've supplied 12v to this circuit and used the RV1 preset to adjust it (to make it 9V or something close). 8 inputs to the transistors come from the micro-controller. So I can drive the large 7 segment (which require 9v) this way...

But it wasn't success. I checked the voltages and found the transistors switch between 0-5v (can't imagine how can this happen???).

Anyway, then I tried putting the resistor to the collectors side. And took the output from collector pin. That was somewhat ok. But the brightness was varying with the number of lighting segments...(When lighting only one segment, there was very little brightness. It's almost not visible. But when lighting all the segments, brightness was too high. Felt like the display will blow.)

I don't feel like to try other means. This was a so simple project. But this large seven segment ruins everything. Can some one help me with this...

This isn't right, and you're lucky the display needs 9 V or it would have gone up in smoke.

First, the LEDs are in parallel with the resistors: your emitters go to both LEDs and resistors, and their other connections are to ground. You need them in series.

Then, your circuit is a common collector circuit. One of the disadvantages is that it can't drive a load higher than the control voltage - 0.7 V, that's 4.3 V, too little for the LEDs. That's where you're lucky, if it were 3 V LEDs they would have been driven with no current limiting at all \$\rightarrow\$ magic smoke.

There are no single LEDs that work at 9 V. Since you're talking about a large display it will have 4 LEDs in series for each segment, to provide equal lighting. At 2.2 V per LED you arrive near 9 V.

The more common way is to drive them common emitter. That is emitter to ground, and LED + resistor in series on the collector side. For a common emitter you'll also need base resistors. 1 kΩ will give you 4.3 mA, which should be enough to drive the BC547 in saturation. You can also use a ULN2803, which is a transistor array of 8 transistors with their base resistors built in. Then you only need one part (except for the current limiting resistors).

Your resistor values are also too high. If each segment needs 9 V and your supply is 12 V then the current though a segment is 3 V/ R. With 10 kΩ resistors that's 300 µA, and that's too little for any LED. A typical 20 mA LED would need a 150 Ω resistor. But check the display's datasheet for both voltage and current. 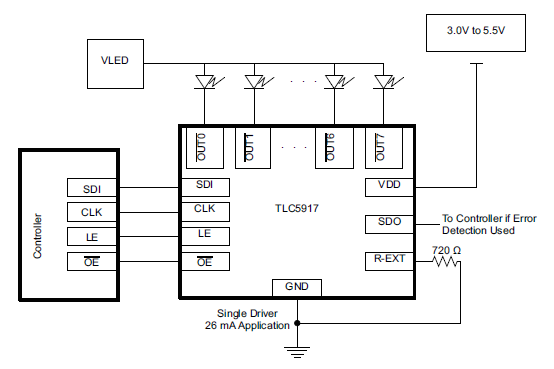 It has constant current outputs, so you don't need the series resistors anymore, brightness won't depend on input voltage variations, and you save I/Os on your controller because it's serially driven. You only need data out, clock, and latch. The current is set with a resistor.

Michael would still use series resistors, but they're probably not required. If you have 20 mA and a 3 V drop (from 12 V to 9 V) then all LEDs on will give you less than 500 mW, which a 16-pin DIP certainly can handle. At higher currents or input voltage they may be a good idea, though.

I have had great success driving large format 7-segment displays using the TLC5916 chip from TI. One chip can drive one display module and if you had multiple modules the TLC5916 chips for each can be connected in series. From the perspective of the microcontroller the display connects with just a few pins as a serial shift register. Simple software can bit bang the interface to output the data for each display update.

The TLC5916 chip can drive displays that are connected to 9V. It also will use a constant current technique for each segment to keep brightness even for all segments. It may be advisable to still put some resistance in series with each segment before connecting to the TLC5916 outputs to share some of the voltage drop and reduce power dissipation in the driver chip.

You can obtain the TLC5916 chips from Mouser in both DIP and SOIC package styles. The data sheet is available from there as well.

for me a simple opto isolator will do.

Not the answer you're looking for? Browse other questions tagged microcontroller voltage transistors switches 7segmentdisplay or ask your own question.