I have recently been looking at IR LEDs but having trouble in terms of finding the distance (in meters, cm or mm) the IR radiation travels through a medium such as air using the below diagram. Can someone help me to find how far this radiation can travel before its intensity is almost 0? 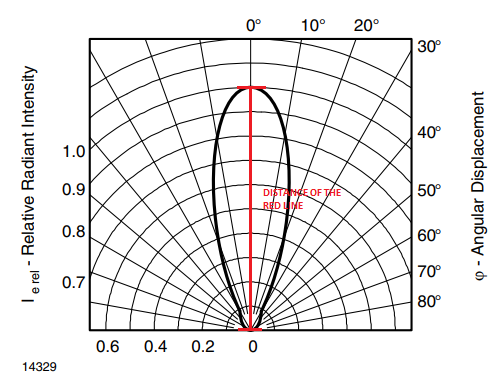 ITS GETTING LATE; I'll return to edit this later.

[noise floor analysis, to predict minimum energy and thus distance, is at end of this answer]

As part of robot-positioning research, about 30 years ago I was detecting IR LED energy at 30 foot ranges (the distance in my backyard), with detection indicated by an LM567 logic-output enabling a red LED to glow.

My collaborator and I moved around the transmitter, an IR LED of 10 mA diode current (about 15 mW electrical power, so about 1-5 mW optical) emitting in a +- 18 degree beam width, with the 10 mA coming from an NE555 oscillating with some duty cycle at 30 kHz. We moved the transmitter until aligned with the RX sensor both in boresight and angle-of-deflection; at 30 feet, outside in the sunlight, the RED LED would change state, indicating the receiver was "seeing" the transmitter energy.

The receiver has a DC nulling circuit wrapped around a phototransistor, for sunlight attenuation. There were various DC blocking filters between the phototransistor and the first stage of gain, thus sunlight attenuation was not required to be complete, rather the response to DC (sunlight) needed to be adequate to keep the sensor output away from the rails (that is, still able to respond "linearly").

The first stage of gain was discrete, crafted to be "low noise" and to achieve some logarithmic/compression gain curve. 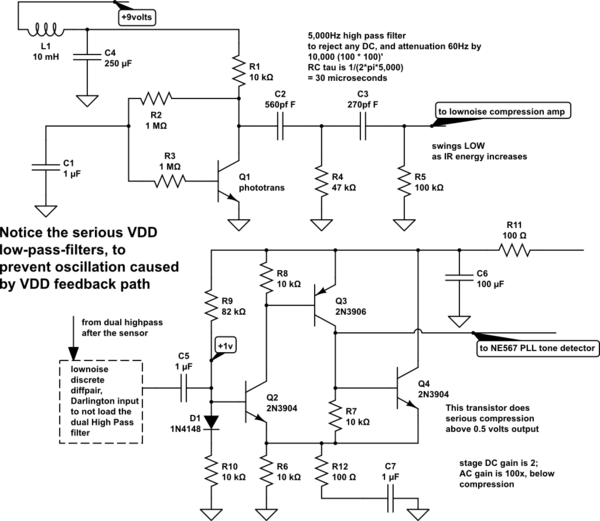 Now you need to compute the noise floor of the phototransistor, using 1 Mohm base resistors. And compute the LM567 noise-bandwidth and signal-noise ratio needed for reliable "logic output".

Given these numbers, we can begin to define "Almost zero".

Assume the tone-decoder PhaseLockLoop bandwidth is 100 Hertz. Thus the noise floor is 40 nV RMS at the base of the phototransistor. And assume the PLL works down to 0 dB SNR, or about 40 nV of signal (ignoring RMS/peakpeak factors).

Photodiodes have about 1 : 0.5 conversion efficiency from optical power in watts, to output current in amps. If this also works for a phototransistor (the collector-base junction), and the Rin of the phototransistor for Beta=100 and reac (1/gm) is 52 ohms at 0.5 mA Collector currenet (for Vce ~~ 4 volts), the Rin is 5,200 ohms and we need 40 nV across that Rin. The signal current must be

Now we need to take 1mW optical energy from the LED, give a +-18 degree beamwidth, and determine how much of that optical energy is captured by a 4 mm diameter phototransistor lense at 30 feet.

Will we find this energy to be about 20 pW?

We need to compute the surface area of a sphere of radius 10 meters, then compute the energy intercepting the Receiver Sensor lense of size 4mm*4mm.

And 5 paragraphs back we computed 20 pW.

Air is not really a definition of anything and is a poor place to start gaining any understanding.

The transmission characteristics and attenuation of the atmosphere is complex since it's made up of multiple gasses, its pressure varies and it has water and pollutants in it.

If you want to know absolutes, then use the HITRAN database.