Multiplexing 2 digit 7Segment with one Bit

I want to control a 2 digit 7-segment LED with a MSP430 micro controller. The display has 8 input pins per digit (8th pin is the dot, which I do not need) and two ground pins (common cathode). The idea is to connect the first 7 pins from the µc to the 7 segments of both digits and then use another pin (the control pin) for selecting which digit to display. By switching fast between the two digits I would like to display a two digit number using 8 pins of the µc only. 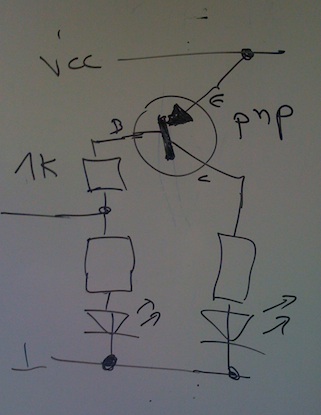 My question is, how to build such a circuit with one single transistor (and resistors of course). I think it has to be a NPN transistor.

This is my first EE question and I have little experience, so I hope I was able to make my question clear.

You are right about the NPN transistor, that is what you need in order to achieve that behaviour, however, since the µC would have to control the cathode of one of the displays, that would be a problem since most µC can only source / sink a few mA. Assuming each segment needs 10mA that would require the pin to sink 70 mA.

The most simple solution is to have two NPN transistors capable of sinking at least 100 mA (such as the common BC547). 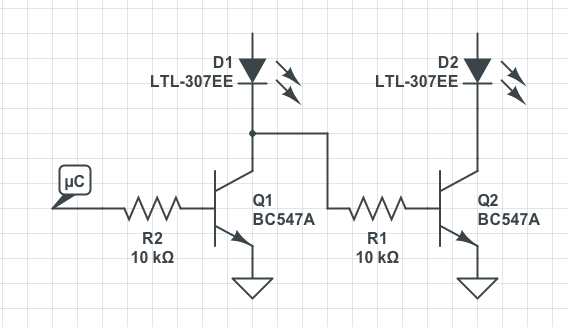 Being D1 and D2 the 7 segment displays (please ignore the reference). The anodes on the LEDs will connect to the µC pins.

In this configuration only Q1 conducts when the µC outputs 1 and when it outputs 0 only the Q2 conducts.

Note
It might be necessary to add a high value pull-up resistor (for example 100 kΩ) to the base Q2.

The first answer is a reasonable starting idea. There are some things to keep in mind while implementing this.

Where the seven anodes of each LED module connect over to the MCU port pins it will be needed to insert series resistors in each line to limit the current to a safe value for the individual segments. The resistor value used would need to be:

I would suggest a lower value resistor on the bases of the two NPN transistors. 2.2K would be more reasonable.

Lastly the software that drives the LED display should make sure to drive all seven of the anode connections to the LEDs to a low level for a short time before the digit selector I/O to the NPN transistors is changed. Then after the digit selector is changed a short delay should exist before the segment pattern is then applied to the port pins for the now active display module. This will prevent ghosting of the segments from one display showing in the OFF positions on the other display when multiplexing at a high rate. The delays only need to be on the order of a third to half of a microsecond or so. Depending upon the frequency of the MCU being used this may be supplied by a few instruction cycles of the software being used to bit-bang the display logic.

Not the answer you're looking for? Browse other questions tagged digital-logic msp430 multiplexer 7segmentdisplay or ask your own question.