I'm learning how to program a PIC10F220. I'm using a PICkit 3 programmer and running physical experiments, as well as running the simulator in MPLABX.

One thing I want to do is set the proper level for a port output latch before the tristate (TRIS) switches to output mode. This diagram suggests that it should be possible, and that the input and output paths are separable: 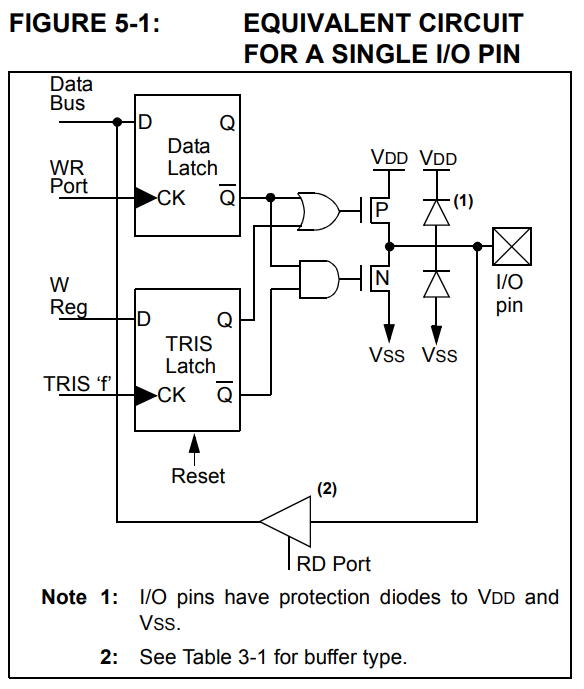 I've written this chunk of assembly:

As in the comments - in real life this works, but in the MPLABX simulator attempted modifications to GP2 have no effect. Why would this be? Have they failed to model the write latch as being functional even when the corresponding TRIS bit is still high (input)?

Some instructions operate internally as read followed by write operations. The BCF and BSF instructions, for example, read the entire port into the CPU, execute the bit operation and re-write the result. Caution must be used when these instructions are applied to a port where one or more pins are used as input/outputs. For example, a BSF operation on bit 2 of GPIO will cause all eight bits of GPIO to be read into the CPU, bit 2 to be set and the GPIO value to be written to the output latches. If another bit of GPIO is used as a bidirectional I/O pin (say bit 0) and it is defined as an input at this time, the input signal present on the pin itself would be read into the CPU and rewritten to the data latch of this particular pin, overwriting the previous content. As long as the pin stays in the Input mode, no problem occurs. However, if bit 0 is switched into Output mode later on, the content of the data latch may now be unknown.

Figure 5-1 is a bit misleading. In fact none of the PIC10F220's I/O pin circuits look exactly like that. Here's the circuit for pin 2:- 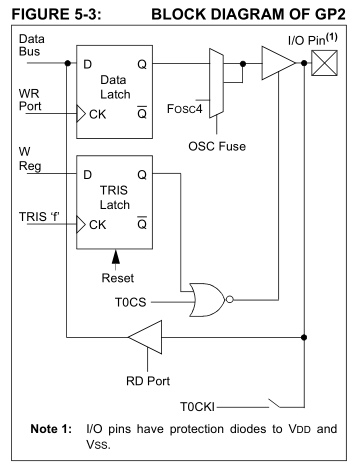 Note that GP2's output driver is disabled when T0CS is high. T0CS is bit 5 of the OPTION register, and guess what? Yes, it's high at power on!

To enable digital output on pin 2 you need to clear the T0CS bit in the option register, like this:-

If you want to use GP0 or GP1 as outputs then you have a similar problem. These pins are shared with analog inputs AN0 and AN1, which are enabled at power on. To enable their digital outputs you need to clear the ANS1 and ANS0 bits in ADCON0.

Your updated code simulated correctly for me in MPLab 8.92 but not in MPLabX 3.65, which suggests a bug in the MPLabX simulator.

Not the answer you're looking for? Browse other questions tagged pic simulation mplabx tri-state or ask your own question.