If we touch / give pressure to a skin, there are many mechano-receptors like meissner/pacinian corpuscles that produce action potential in neurons.

I am in a need to detect those action potentials from the skin surface like I give physical stimulus to tip of the finger, then is it possible to record just the spikes whether fired or not in neurons?

I mean just the non-invasive circuit which can detect nerve firing and display yes or no.

I searched for the last 3-4 months and developed one circuit (instrumentation amplifier + gain stage + filter + surface electrodes), but all efforts in vain.

Please suggest me, how to proceed ahead. Is this kind of circuit possible? Or is it (even) available commercially?

Yes and no. More accurately, yes, but it's not easy, and you can't do it for a single trial -- you need many trials.

You first need a fairly good biopotential amplifier, with surface electrodes on the skin surface above the nerve that carries the signals to the spinal cord. This is the easy part.

Next, because the signal is tiny and noisy, you will never see one event, thus you need to do this hundreds to thousands of times, and average all the events to see it. This is called ensemble averaging. This is a killer method for pulling tiny signals out of noise.

When I was an undergrad, the lab I was in did this in rats, looking for cells in the spinal cord that responded to both renal nerve stimulation and somatic sensory information (Knuepfer et al., 1987 -- https://www.sciencedirect.com/science/article/pii/0006899388912929 ). We glued a pin head to a small speaker cone, and put the pin head near the skin. We could poke the skin by sending a signal to the speaker, and use the same signal to trigger acquisition. We had the advantage of recording single neurons, so we didn't need to average for very long. 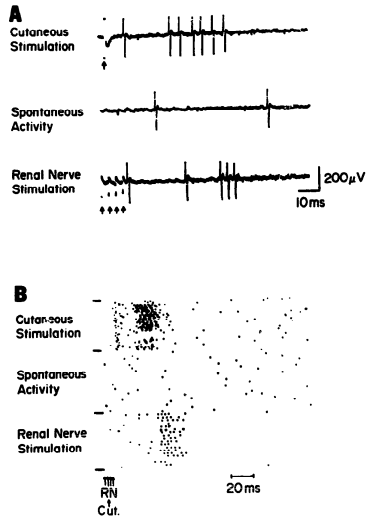 (Historical note: IIRC, we had a fancy homemade ensemble averager, and I have no idea what the mechanism was. More conveniently, we used some custom hardware to generate inputs to an analog storage scope that displayed the output of a window discriminator as a raster, as you can see from the snip from the paper referenced above. Z-inputs on scopes can be a wonderful thing!! The scope screens were simply photographed using an oscilloscope camera with Polaroid film, and then the graphic artist would generate the figure using special high-contrast film to generate a negative image -- NOT the way it's done today)

Each horizontal line of dots in the image is a trial, with a dot showing the occurrence of an action potential. We could see this because we were recording with very high impedance electrodes right next to the neuron. The data would be much less clear (and, in fact, for this case, not possible) with surface electrodes. You might be able to see the story from one sweep line, but when you stack many trials right on top of each other, it's a very loud story. For signals using surface potentials, you really would need to average to see anything.

In my bioinstrumentation class, I do a demo with electrical stimulation of the medial nerve at the wrist, and record from where the nerve enters the spinal cord near the neck with surface electrodes. You can get a response sufficient to measure nerve conduction velocity, and show that there are different types of nerve fibers by their different speeds. This is done clinically, in EMG labs, using similar methods, but with electrodes that break the skin for better signals. They still need to average. These systems are commercially available, in the thousands to tens of thousands of dollars range--e.g. https://mfimedical.com/products/nicolet-viasys-viking-select-emg-ncs-machine1 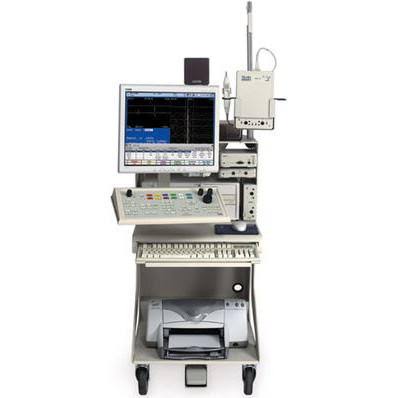 You should be able to do this with a modern digital oscilloscope, most of which have some sort of averaging facility, if you have a good trigger signal, and if the averaging routine allows you to use enough sweeps.

The last part, the yes/no answer, is trivial compared to the rest, but useless until the rest is handled.

In your attempts to build a working analog EEG I have a couple of suggestions.

Make sure you use a conductive gel on the scalp and rub area with light abrasion. This will reduce impedance due to dead skin cells. You will also want to use a differential amplifier (one amplifier per pair of electrodes) with a gain of between 1,000-100,000 times or 60-100 dB of voltage gain. Your common system reference electrode should be connected to the other input of each differential amplifier.

You are then going to want to pass it through an anti-aliasing filter after which it should go through a ADC converter. Typical ADC sampling rates usually occur at 255-515 Hz.

Also make sure to identify where your circuit is having issues. Hope this helps.

Not the answer you're looking for? Browse other questions tagged arduino embedded biopotential ecg medical or ask your own question.

1
Hardware to Detect EMG or Skin Resistance
6
Is it possible to connect an embedded device to the internet through a USB internet Dongle?
4
Recording Servo/Motor movement with arduino
0
Instrument(s) for measuring (and recording) temperature, voltage and current