I would like to ask you about a problem that I have been experiencing recently. I am using a contactor to safely disconnect a hybrid motor starter. The starter is designed to, when tripped with its signal, disconnect the motor during the zero-crossing of the current waveform, reducing this way the overvoltage produced by switching off an inductive load.

Obviously, when you open the electric circuit acting on the contactor, the current waveform likely won't be zero-crossing, thus resulting in an overvoltage that may affect the TRIACs in the hybrid motor starter.

In order to reduce this effect as much as possible, the starter manufacturer suggests to install a RC snubber. All right up to this point. However, they say you can install this RC element motor interference suppression device in the terminal box of the motor or in the contactor itself.

This would make a difference because I could have a contactor to safely disconnect 3 or 4 hybrid motor starter at once, only needing one RC element instead of one per starter.

But I fail to see how this would be the same thing from an electrical point of view. That is to say, I don't see how the RC placement won't affect the overvoltage that the starter will suffer.

Thank you in advance for your help regarding this matter.

EDIT: I add an image of the problem. 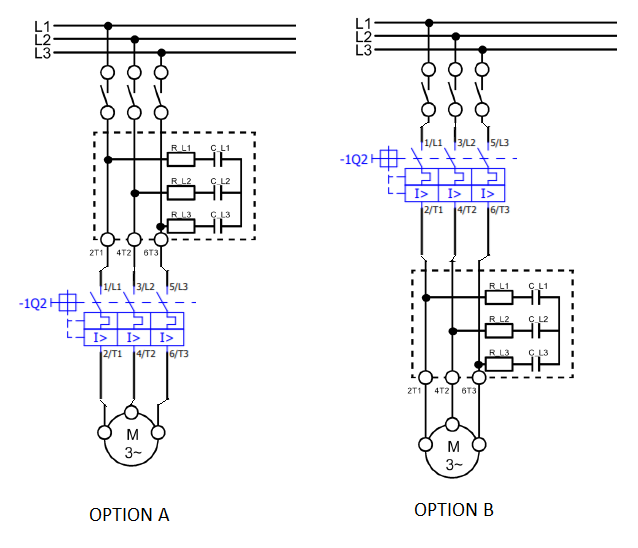 Quick Answer: Only Option B will "protect" contactor -1Q2, Option A will not limit overvoltage experienced by the contactor -1Q2.

There are several things to consider:

In your specific case, assuming that the impedance of the grid is low and that the wires between the terminal box and your contactor do not represent a significant source of stored energy, i.e. inductance, the difference should be negligable if you place it in one place or another.

The overvoltage, which can create an arc while opening the contactor is what you want to avoid, and therefore the element of interest to protect is the contactor.

But it seems that you are worried about your hybrid starter more than the contactor.

I would suggest to place an RC snubber across the motor, phase and neutral) because I would consider more important to guarantee that a contactor does effectively cut-off the power completely to the motors. Additionally, to limit the overvoltage on the terminals of the hybrid starter I would suggest to place some transient voltage suppression devices, such as Varistors or similar across the hybrid starter.

With regards to your drawing:

Between those two options, definetly Option B, The snubbers between your contactor -1Q2 and the motor. Option A will do nothing with regards to overvoltage experienced by contactor -1Q2.

I had not even contemplated option A because it does not allow the snubbers to work. Just for completion, these are the scenarios I had been comparing. 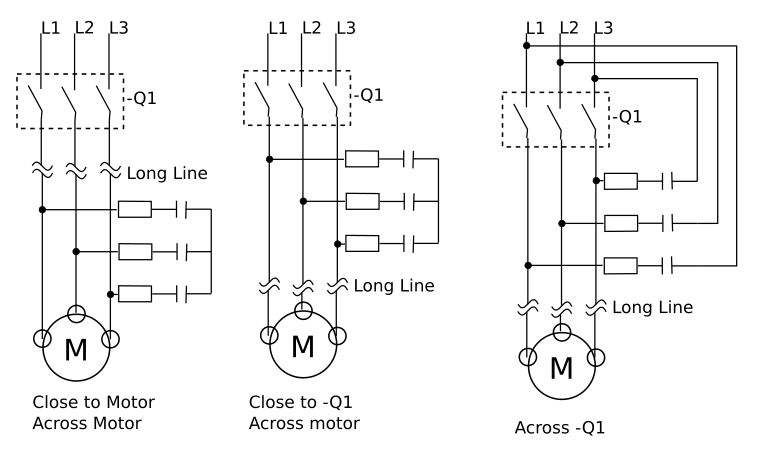 Other resources possibly of interest

If you switch 1,000 amps in 100 nanoseconds, across 10 meters of wire with no local Return wire to help reduce the flux, then the voltage kick is

Not the answer you're looking for? Browse other questions tagged snubber or ask your own question.

17
How to design an RC snubber for a solenoid relay driving an inductive load?