What is the application of capacitor between Vcc and GND [duplicate]

Ask Question
Asked 2 years, 3 months ago
Active 1 year, 5 months ago
Viewed 942 times
1
\$\begingroup\$
This question already has answers here:
What is a decoupling capacitor and how do I know if I need one? (17 answers)
Closed 2 years ago.

This is a schematic of a ATmega328P used circuit. It has paralleled two 100nF capacitors between Vcc and GND. (C8 and C9) What is the function of this two capacitors and why they are paralleled? 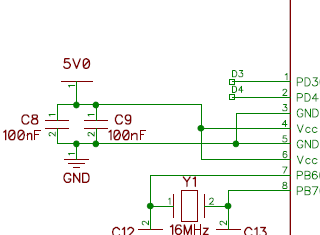 MCUs often have multiple pairs of GND/VDD pairs, to provide charge to the MCU core with lower inductance; adjacent leadframe metallic structures for GND/VDD are the standard method; adjacency of conductive paths produces the minimum loop area and thus the smallest STORED ENERGY and thus the quickest way to rebuild the on-chip charge just consumed by MCU ROM/RAM/ALU/BUS activity.

That charge is best re-plenished if a reservoir of change (those bypass capacitors) are located extremely close to the MCU GND/VDD pin twins.

To avoid failing the EMI radiated emissions, the VDD capacitors should be dampened; the internal ESR may be adequate IF YOU GET LUCKY. If you fail EMI, confusion reigns and people worry that the "magic" has vanished, when the previous design was executed with a punt-and-hope we-are-unaware of how to design well dampened VDD systems.

I'd implement this as shown here

When operating a 16 or 20 MHz class uC, which come in different grades it means the FET switching speed is fast enough to be stable. The cause of this speed is a lower internal RdsOn*Ciss product which in turn results in a higher internal dI/dt for the many millions of internal switches.

When traces to Vdd,Vss are 1nH/mm and Vp=LdI/dt=LVdd/(Ron*dt). Where the numerator speed grade increases the denominator when they both go lower.

Thus to keep ripple to a reasonable level, someone in your image (that has no citation) has decided to use two 0.1uF which is pretty standard to use one. More important is the self resonant frequency of this decoupling cap due its spec and your layout must be defined to know exactly what happens, but with high transient fast current rise time that reduces to near zero, the better you need to learn about reactive decoupling frequency response and load regulation.

Two may be twice as good for ripple reduction with a close layout, but what is acceptable for analog parts of the uC?

You can also get more expensive caps that are twice as wide vs. Long, which gives inherently higher SRF. But on the whole, this example is sound advice for 16,20,MHz ARM chips which have drivers of 25 Ohms.

Not the answer you're looking for? Browse other questions tagged capacitor filter noise atmega or ask your own question.

207
What is a decoupling capacitor and how do I know if I need one?
1
Decoupling Capacitor Usage Conditions