EDIT 1 : I made changes to the code as @Anonymous suggested in the answer. It seems to have improved but now I seems to be getting incorrect response OR SD CARD putting response at the wrong time.

I am initializing my CLK as Output with internal pull up and driving low. Same goes for the MOSI. while MISO is Input , Pull up and nothing driving that.

Here is my SPI Send and Recieve. 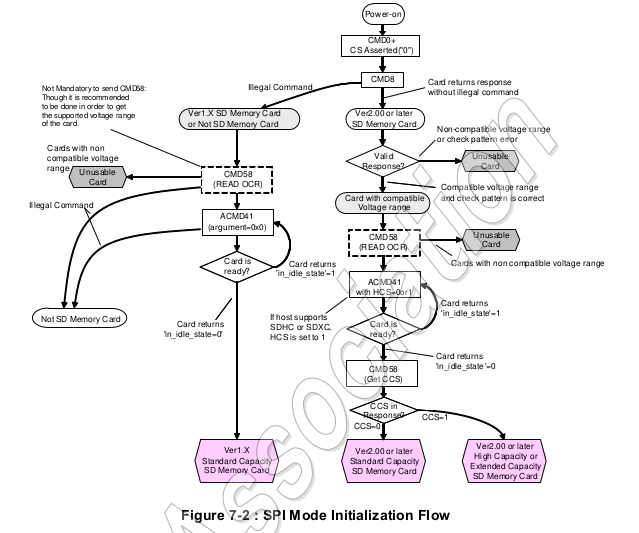 The issue I am facing is I am getting the command and response for the 1st two commands correctly that is CMD0 and CMD8 and I am not facing any issue no matter how many times I try. When I send the third command i.e :

1) CMD58 as per the SD Org document , I dont get any response back. 2) CMD55 as per the person's answer on this SE, I seem to get correct response but the reponse I read get's an 0xF before the reponse so I believe that SD Card starts reponding from halfway of the clock generated. So I hooked up logic analyzer to it and here are the results.

No Response on the first clock :

There is some insights given on the link to answer pasted above that say :

Note that responses that have the MSB set but ain't 0xFF usually suggest that your SPI got a shift in clocking (as a result of e.g. Vcc drop, which happens routinely when you're doing SD hotplugs). To fix it, you can try to completely reset the device (power on/off, deassert/assert S̲S̲ etc.); it usually works.

But I am not doing any hotplug and neither resetting / power cycling works, So can anyone help? Please?

Your diagrams show chip select as always active. I do not say that it would not work this way, but deactivating CS, in most of the cases, signals card that host is finished with the command.

The I have the following suggestion for you - change the way you access the card:

Not the answer you're looking for? Browse other questions tagged spi sd or ask your own question.

19
What is the correct command sequence for microSD card initialization in SPI?
1
What mode of SPI is the standard if nothing regarding the mode is mentioned in the slave datasheet?