Do chips really need multiple values of decoupling capacitor in the same packages?

I recently attended a course on High speed digital design, where the lecturer went to some length to explain that a capacitor's performance for decoupling was limited almost entirely by its inductance, which in turn was almost entirely due to its size and placement.

His explanation seems to clash with the advice given in many datasheets, which suggest multiple values of decoupling capacitor even though they have the same package size.

I believe his recommendation would be: for each package size, choose the highest capacitance that's feasible, and place it as close as possible, with smaller packages closest.

For example, in a schematic from Lattice Semiconductor, they suggest the following: 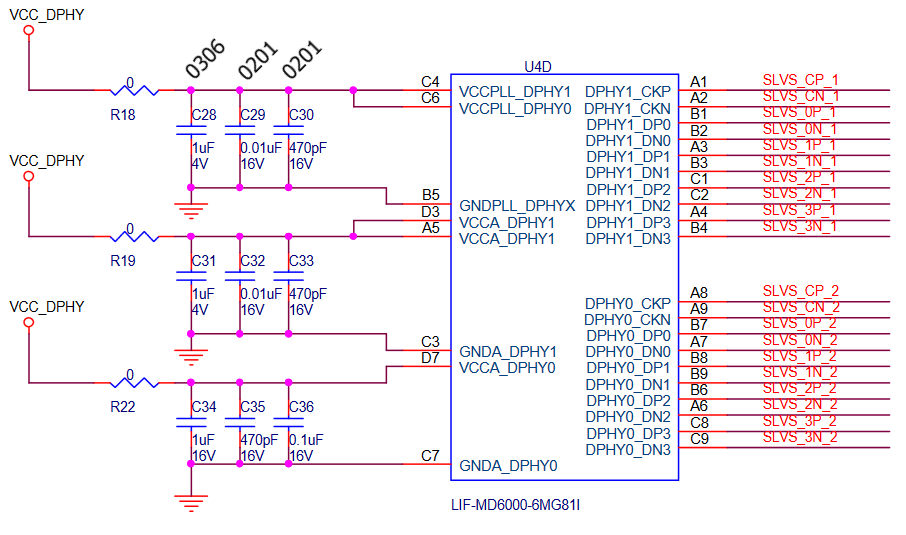 Q2: Wouldn't it make sense to replace all three of them with a single 1uF capacitor in an 0201 package?

Q3: When people say that a higher value capacitor is less useful at higher frequencies, how much of that is due to the capacitance, and how much is due to the increased package size usually associated with larger caps?

This is a question I've been wondering my self from time to time, and I haven't found an answer yet. I did a simulation with LTSpice to get some kind of answer. I chose a couple of capacitors from Murata pretty much on random: 4.7 µF https://psearch.en.murata.com/capacitor/product/GRM155R61A475MEAA%23.html and 100nF https://psearch.en.murata.com/capacitor/product/GRM152B31A104KE19%23.html

I set the ESL for both caps to 300p and ESR for 100 nF to 30m and for 4.7 µF to 8m. With these values their impedance seems to match quite well to that in the Murata's graphs. (To be precise the ESL is not exactly the same, but it is close enough so I'll use the same value) 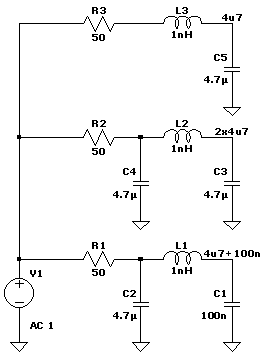 The results are interesting, but not very unexcepected 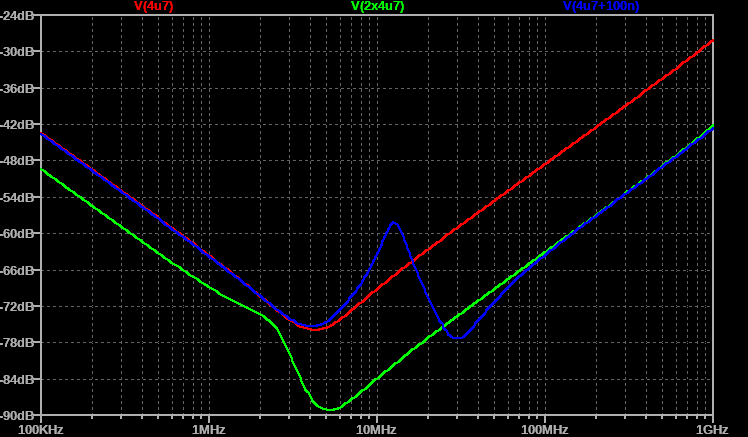 Adding the 100 nF increases filtering, except for the antiresonance frequency. Adding another 4.7 µF has the same effect, except that there is no antiresonance. The 100 nF works better at its self resonant frequency, but it's effect is smaller than the lost filtering performance of the antiresonance. Based on this, I'd just add more bigger capacitors.

But, if you e.g. had a noise problem at 30 MHz, then it makes sense adding that 100 nF capacitor, because it does filter that frequency well.

At it's resonant frequency it is. If there is no noise at that frequency, then not that much.

Q2: Wouldn't it make sense to replace all three of them with a single 1uF capacitor in an 0201 package?

Would be probably better to add two 1 µF 0201 capacitors. Then if you do run in to trouble at some certain frequency, you could change one of them to capacitor that has SRF at that frequency. You could also leave the other one as not assembled, but capacitors are cheap so why bother.

Q3: When people say that a higher value capacitor is less useful at higher frequencies, how much of that is due to the capacitance, and how much is due to the increased package size usually associated with larger caps?

Pretty much is about the package size. Of course the higher SRF helps again, but only if you have noise at that frequency. Otherwise it is just better to double the biggest capacitance.

The answer is simple:

The maximum capacity for these is about 1nF. So either you need a bigger package or you have to stick to the X7R dielectric, which behaves not so well at >10MHz.

Read the duplicate answer for all the theory, but here's a good rule of thumb:

A general rule is at least 1-10uF plus a 100nF, but the above example looks quite fine for a circuit with a high clock speed. For audio applications you want something similar, but with much higher value for supporting the demands on the power bus with music frequencies.

PS: The small capacitors should be placed closest to the IC pins to minimize the inductance between the capacitor pins and the IC pins. The larger value capacitors can be placed further away if necessary.

Putting two different types of capacitors in parallel, like an electrolytic and a ceramic, will provide a low impedance over a much wider frequency range.

Electrolytics have significant inductance. Their impedance at high frequencies will often not be enough to bypass a chip. A ceramic capacitor in the range of 0.01 to 0.1uF or so will have a low impedance into the tens of megahertz, typically.

I use op amps in linear circuits. Op amps will oscillate and/or exhibit very poor transient response if not properly bypassed. I solder a 0.1 uF/50V ceramic capacitor directly to the power supply leads of the chip, on the bottom of the board. The electrolytic capacitor is chosen according to the load requirements placed on the chip; 1 to 100 uF is common. The electrolytic should be as close as possible to the chip, but 20-30 mm is usually acceptable if necessary.

Not the answer you're looking for? Browse other questions tagged pcb-design decoupling-capacitor high-speed or ask your own question.