I am currently designing a brake light for a Formula Student car and I am looking into existing solutions on the market for inspiration.

The two specific solutions are this, and this.
The LED I found to be suitable is this one.

Based on my research I was thinking about having a regulated buck converter converting from 12 volts to the forward voltage of one LED (2.3 V in this case), and putting them parallel to each other. The converter being regulated, it would maintain that voltage so it would not cause thermal runaway, meanwhile maintaining low power consumption. I would not like to have multiple LEDs connected in series, because if one fails, multiple would fail.

I have troubles finding a straightforward way to calculate the total light output for the brake light from the luminous intensity of a single LED, and the way these correlate to each other.

How does having multiple LEDs next to each other affect the total light output, what spacing and viewing angle would be the optimal, do I need a lens on top of these LEDs and are there any better options?

How should I approach this design question which goal is to achieve similar light output as those I listed previously?

Also, the bulb size for the LEDs in the listed examples seems to be 9.5 and 6.8 mm respectively.

You simply add the output of each LED to get the total output.
The distance between the LEDs will have negligible effect.

One confusing aspect of the angles used in optical measurements is the candela "view angle" (luminous intensity) and the angle at which the light travels (illuminance).

For example let's use the LED you selected.
The Kingsbright LED has a view angle of 70°.

At a distance of 20 feet the position of the LED is inconsequential. If the LED were positioned 1 inch over, within the break light fixture, point C would also move 1 inch. 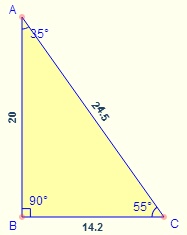 Only directly behind at 0° will the LED been seen at 100% illuminance .
As the angle increases the illuminance decreases.

I created a web app that shows the relative illuminance/irradiance between various LEDs. Angle Irradiance Web App
This compares the angle irradiance with one LED facing sown and the other facing up.
Compare SSL 80, SSL 120, and SSL 150. These are OSRAM Oslon SSL LEDs.

In the datasheet there is a graph that shows the intensity (candela) with respect to view angle. The highlighted area is the 70° (±35°) which is included in the specified 3.2 cd (3200 mcd). 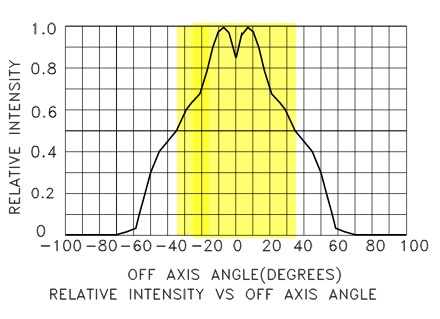 The angle here shows the illuminance decreases as the angle increases.

This angle has nothing to do with the view angle specified for the luminous intensity.

Comparison of the two products you linked

It is not simple to compare two LED when you have the proper specifications. The problem here is the authors of the specifications do not understand photonics.

The problem here is candela is a measurement of lumens (lm) per steradian (sr). Where a steradian is the amount of light within a cone of a specified angle.

This candela view angle of the cone has nothing to do with the "off axis angle" chart shown above.

A steradian of 0° does not exist. It has zero light. If you were to convert candela, with a view angle of 0°, to lumens the result would be zero lumens.

Example of a steradian 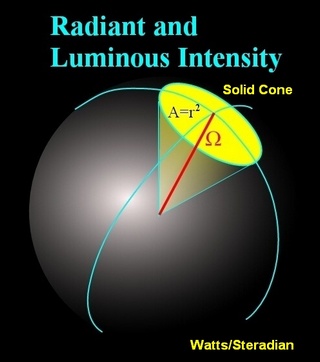 What is troublesome is where this one says:

I have a very detailed explanation regarding comparing LEDs in this answer I wrote earlier today: Cheap way to power blue LED on coin cell

The 5700 mcd @ 30° does not specify the wavelength so I cannot estimate the difference based on the Photopic Luminous Efficacy from the Relative Sensitivity Curve for the C.I.E. Standard Observer

Looking at the photos of these products it appears they are more red-orange than red. When the color red is specified the wavelength can vary for 620 nm to 660 nm.

Firstly, power LEDs are bound to be driven by a constant current source. Direct parallation of LEDs is also a bad idea. Unless you fit each LED with a CC driver or resistor (when using a resistor you should limit the current well under maxim) It's better to put some in series. The chance of led failure is extremely low if you drive them correctly. In a series connection every member of the circuit gets the same current and it eases the voltage difference as seen by a switchmode driver. You can use a hysterisis mode current driver designed specifically for LEDs.

Modulate the LED brightness by applying PWM >4KHz through chip control or adjust current feedback in some way. Use powerful LEDs more powerful than you need so that you can tune the brightness.

LED chips are usually very broad by default. Some types are pre fitted with lens so they are narrower. If you have specific regulations requireing specific brightness or specific angle, please let us know.

Oh another thing. If you decide to use a resistor approach your drive voltage should be by some order higher than the LED Vf. Say if your LED Vf is 2.3V, do not drive from 2.5, 3V, 3.3V source. Drive from 5V or higher through a resistor instead. This is because modern LEDs are sensitive to minute changes as a result your light may flicker if your drive volt is too close.

1). You need to get familiar with LED specs.
2)Then finally after you learn a bit, you may prefer the benefits of man-years of R&D and choose the best tail lights that fit your surface design or modify to fit. Your choices are amateurish. Pick from Buick, Lexus, Mercedes, BMW etc. Audi was the first to use LEDs over 10 years ago. Go to a pick-a-part auto wrecker. Do some research into the lens, fixture and electronics. You have so much to learn.

Brightness at a distance.

This attenuation from a point source by the distance squared relative to the standard measurement.

= indirect reflected light; Generally measured in total lumens of light output in all directions where beamwidth affects the mcd or apparent brightness.

The lumen is defined in relation to the candela as

There are some caveats to acuity and apparent brightness or emittance which needs to be large enough to exceed the retina resolution. So the larger area may be dimmer for the same optical power but better acuity from the longest range viewable. But you don’t need runway lights,head lights , just brake and tail lights.

The geometry of modern cars tends to spread the apparent area with a stepped fresnel lens, yet still have narrow beamwidth with less loss. Look for these, as they are ideal.

The colour you want is probably high efficiency RED which is 630nm dominant, or nmD which is eye-corrected wavelength vs true deep red 660 nmD which looks nicer but requires more power for the same brightness.

The beam angle is important to consider what you need. If you cut the angle in half, the brightness does not quite double due to lens loss but this is my rule of thumb

But your power specs are critical to this requirement of luminous Intensity.

I used to sell only the best 5mm LEDs and were twice as bright as the ones used here with 30° Kingbright , when normalized mcd / mW and still have tons left. They cost a lot more than open bin, but much cheaper than these amateur epoxied assemblies in your links.

For PS , you need to specify Vin range and desired output power and efficiency. I might consider a 98% Boost regulator with constant current over a 92% buck regulator, the choices are many, but do you want to make or buy?

Not the answer you're looking for? Browse other questions tagged led buck automotive luminous-flux or ask your own question.

2
Cheap way to power blue LED on coin cell
1
Why do LEDs require a constant current source and not a constant voltage source as power supplies?

10
12v LEDs and use on a motorbike
4
Choosing an LED
22
Why do these LEDs have different brightnesses
3
ON/OFF pulses to rear brake light of sportbike
3
Human perceived (relative) brightness of indicator LEDs
0
High power LED vs. standard LED
3
Light-emitting diode luminous intensity at sub-mA currents
0
Adding luminous intensities (cd)
0
How does one match irradiance to Luminous Intensity in Candela of source?
1
LED luminous intensity vs forward current and duty cycle