My cousin gave me a LED fixture for which the power supply is no longer working. He threw it away so I cannot look at the specs in the PSU. He says he measured 78v out of the PSU before throwing it away, but he did not sound convincing.

In the pictures attached, you can see the whole led fixture and the specification found in the fixture.

I also attach a video with the behaviour of the led fixture attaching a led driver I had with output 36V-68VDC 300mA.

It flashes, but it should remain lit. Maybe amperage of this led driver (300mA) is not enough? I was considering that maybe the 12*750 means 12v and 750mA, but it seems unlikely to me.

It appears each row is a serial string of 20 LEDs each.
So a voltage of around 60V would be expected (20 x 3V per LED in series). If so a 78V constant current driver would work.
That is if the two strings are wired in parallel. 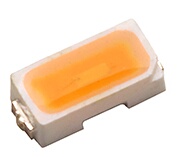 So as a mid powered LED, the current would likely (safely) be in the 60 mA-150 mA range (or less). If 300 mA were used and the row are wired in parallel then each row would get 150 mA. So if 60V your driver should have stayed on steady.

What you need to verify is if the PCB track under the red line (between white arrows) goes down to the last LED in the row. Also verify there is a single track between each LED and no tracks going anywhere else. 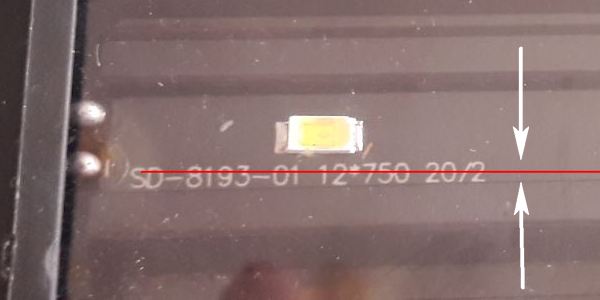 If it were 12V and 750 mA then the row of 20 LEDs would be broken into 5 parallel sets of 4 serial LEDs. If 750 mA, then each string of LEDs would get 150 mA. Which is very reasonable for a mid power LED. If this is the case you should verify the tracks connect the LEDs in 5 sets of 4.

The reason I go with five sets of four serial LEDs is these mid powered LED often have a forward voltage of 2.75-2.8V. May 12V strips use 3 LEDs in series but then there would be 21 or 18 LEDs per row.

What is important, when powering the strips, is to feel the PCB near the LED to see how hot it gets. If the LEDs are getting too much current the heat from the LEDs will burn you.

Keep in mind these strips have very little value. A strip with 50 mid powered LED from a top tier vendor (e.g. Bridgelux) runs about $4.