It is the first time I am designing a PCB with surface mount components. I am trying to generate footprints for 0805 resistors and capacitors, and 1210 capacitors using the IPC footprint wizard which is built into Altium. The issue is that I am not sure if it is generating the correct foot prints. When I compare the footprint generated, to that given by a component manufacturer, the dimensions can be significantly different.

I generate the footprint in Altium using the wizard and it generates pad Dimensions of X = 1.45mm, Y = 1.25mm and Pad spacing of 1.7mm. The spacing between the pads is only 0.45mm (very close). It looks like this: 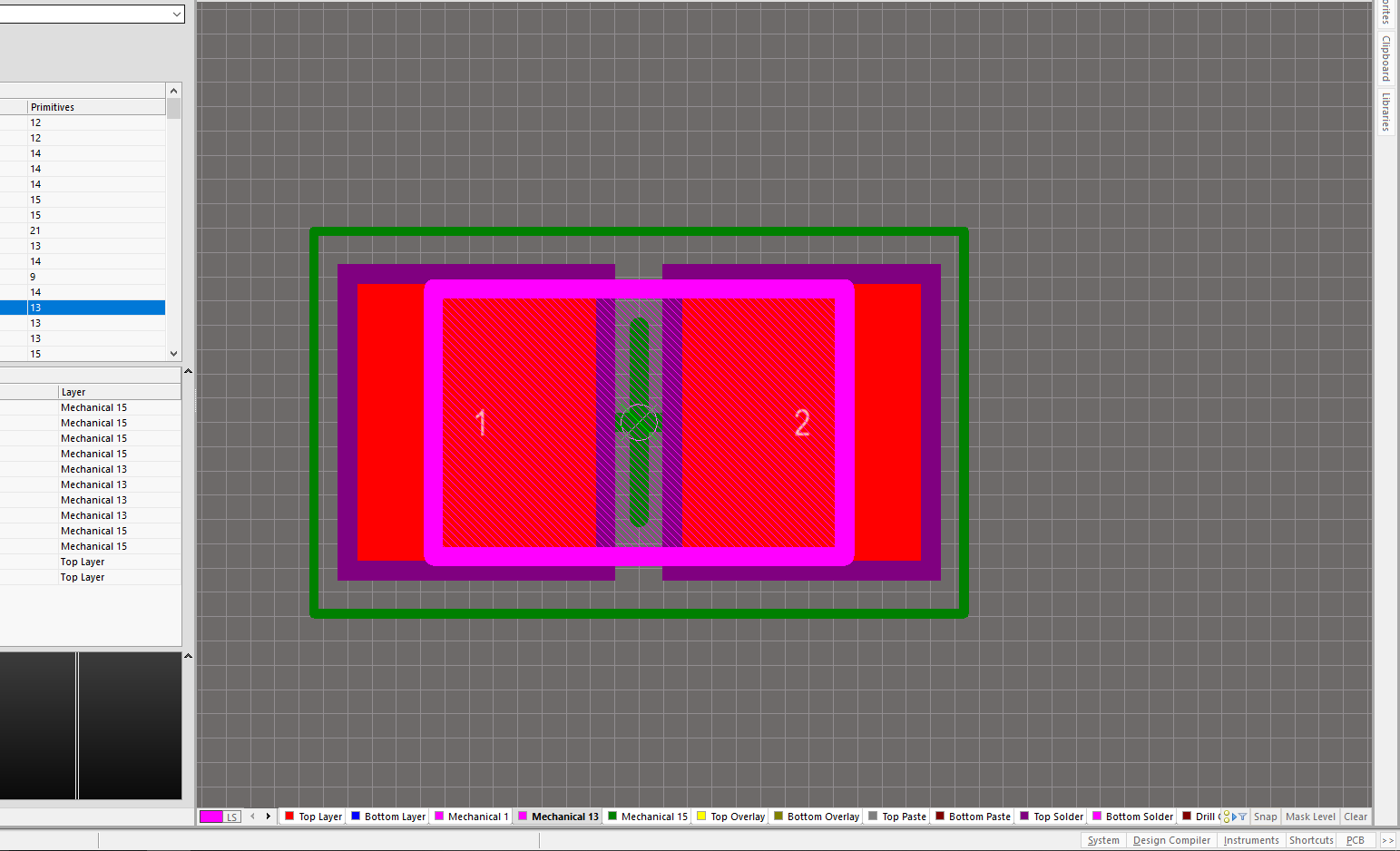 The datasheet recommends the pads to be X = 1.4mm, Y = 1.65mm, and Pad spacing of 2.6mm. The Pad Spacing parameter is always the most drastically different from datasheets whenever I use the wizard. If I draw the pads according to the datasheet, then it looks this this. The pads are a lot more spaced apart 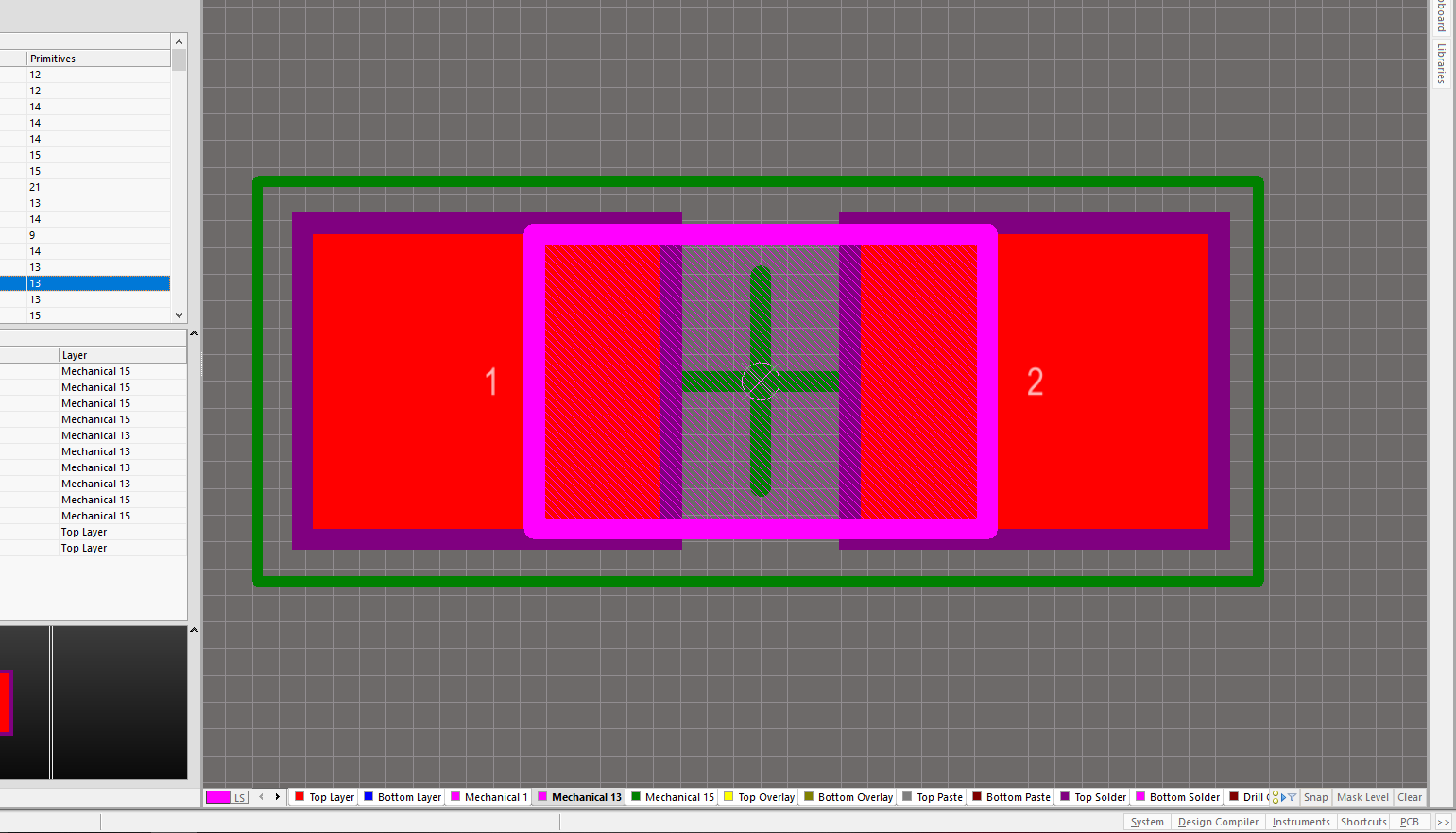 My question is, can I trust the IPC wizard? Are the foot prints generated by it still ok, even though they are very different than those recommended by manufacturers? I just don't want to spend so much time designing the PCB, only to find out the pads are incorrect after I get the boards made. Sorry, it probably is a question that has a very obvious answer but it is my first time doing this so I don't know what to follow. Your help would be really appreciated.

IPC generally has three different variants for every component footprint - L, N, and M, which stand for Least, Nominal, and Most. If you use the Least option the component pads take up the least amount of space, which is great for high-density boards. Nominal is slightly larger, and if you use the Most option the component pads take up the most space. This is ideal for low-density boards which you plan to hand-solder.

The first image you show appears to be either Least or Nominal (I'm guessing Nominal), whereas the second image you show looks more like the Most option. There will often be minute differences between the manufacturer's suggested footprint and the IPC versions, but they will almost always be close to either the L, N, or M options.

Personally I use the IPC-compliant footprints. I have 0805_L, 0805_N, and 0805_M footprints for use in different situations.

For more details on the IPC-compliant footprints, how the pad sizes are calculated, etc. see IPC-7351A.

Both will work, you have quite some room to work for the pad sizing and placement on this type of components.

The point there is more about a question of space available on your design. If you have enough space, a larger spacing is easier to solder and easier to inspect. You can also run traces below the chip between the pads if needed.

The first version is more tight and allows you to place more components on a tighter space.

It also depends how you are soldering, manually, reflow, using stencil and so forth, larger pad are usually easier to handle, especially if you are doing R&D and need to replace components, solder manually, etc..

Not the answer you're looking for? Browse other questions tagged components altium footprint or ask your own question.