Explanation of this drawing (transistors) [closed] 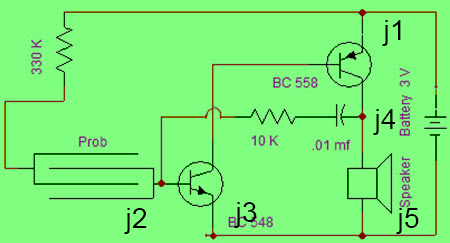 I am very new to ECE and when i googled circuits for the beginner and this was one of them.

So far i have a basic knowledge of transistors and that they exist. please correct me if i am wrong.

Question: Also i have a thought that capacitor could be use as some kind of oscillator but i don't see how would it work in this circuit.

i started to learn electric circuits this morning so please be gentle.

With no water present:

There is voltage across both transistors, but neither has any voltage on their bases, so the transistors remain off.

Here it gets complicated. When the PNP transistor turns on it pulls its collector voltage higher. This raises the voltage on one end of the 10k resistor, which increases the base current of the NPN. At this point each transistor is acting to turn the other one on harder: this condition is known as positive feedback.

This state cannot last, because the capacitor starts charging up and the current into the base of the NPN drops. At some point the NPN's base current drops to the point where the PNP's base current starts dropping. At that point the PNP's collector current falls, and the speaker's voltage drops. When that happens the capacitor and 10k resistor try to pull current out of the NPN's base, and it turns off more. You have the same positive feedback situation, only it's acting to turn off both transistors. Eventually the capacitor discharges completely, the NPN starts turning on gently, and the process repeats.

If the components are sized right, the whole cycle takes between 1/200 and 1/2000 seconds to repeat, and you hear a tone in the speaker. The frequency of the tone will be dependent on the resistance of the water sensor, the temperature, the transistors chosen, and a whole slew of other things you cannot control.

Not the answer you're looking for? Browse other questions tagged transistors circuit-analysis or ask your own question.

0
Is this an astable multivibrator?
2
Current direction in a circuit with 2 transistors

3
Circuit short circuit capacitor question confusion
3
Mystery circuit: latching relay control with transitor / capacitor - why doesn't it work?
2
Newbie Question about NPN amplifier circuit
6
Using capacitors for flashing lights
2
Current direction in a circuit with 2 transistors
0
Why is transconductance defined so?
2
Is it possible to make current flow through a transistor from the emitter to the collector without supplying voltage to the base?
2
Is pulling current from Collector to Base allowed? (PNP transistor)
0
Transistors, explanation of current gain