Are audio cassettes FM or AM?

I know that cassettes store an analog signal, but is the signal Amplitude-Modulated (AM) or Frequency Modulated (FM)?

Neither, there is no modulation involved. The magnetization on the media is directly (and hopefully fairly linearly) related to the waveform amplitude.

There is a high frequency bias signal added to the audio signal, to get the resulting signal on the tape to a linear range of the magnetization curve, but the signal at the head is a sum of the two, not a modulation. 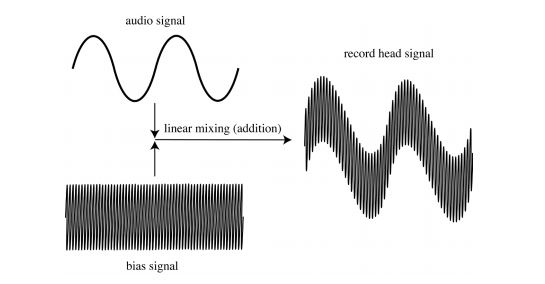 That image is from here, a good description of the process. This is stressing my memory of tape decks I had 40 years ago... The one instance I recall of amplitude modulation (kinda) was Dolby HX, which changed to amplitude of the bias in response to high amplitude audio signals, to keep the resulting signal from going into saturation. https://en.wikipedia.org/wiki/Dolby_noise-reduction_system#Dolby_HX/HX-Pro

It is neither, the signal is recorded as a magnetized pattern without any form of modulation. This can give an impression of how that works:

I got that from here.

See, no modulation needed, the amount of magnetic flux is proportional to the actual audio signal.

Some HiFi Stereo Video recorders do use FM to record the audio though.

Analog tape recording for audio cassette doesnt require modulation. But since magnetization ability of the particles on the tape does not have linear response at low signal levels of the audio to be recorded, poor response will result during playback.

To prevent this, technique called biasing is applied. This creates very linear response of magnetization for the entire dynamic range required for high fidelity audio.

When recording, magnetic tape has a nonlinear response as determined by its coercivity. Without bias, this response results in poor performance especially at low signal levels. A recording signal which generates a magnetic field strength less than tape's coercivity is unable to magnetise the tape and produces little playback signal. Bias increases the signal quality of most audio recordings significantly by pushing the signal into more linear zones of the tape's magnetic transfer function.

So, you may have confused between this high frequency AC bias used in audio recording with modulation.

0
The primary selection criteria for choosing FM vs. AM is dynamic range
0
Amplitude modulated wave weird display in oscilloscope
2
Does amplitude of FM signal even matter?
2
Can we transmit FM signal using AM band and AM signal using FM band?
6
Can AM and FM signals at the same frequency be separated?
6
Why are the resistors in an AM modulator necessary?
0
How would a modulated and demodulated signal differ in FM and PM? Simulink Simulation