How do I specify a low RFI LED driver?

I bought a bunch of very cheap 18W LED lamps. I love them; they look great and the light is excellent, however the drivers throw out a lot of RFI and is interfering with my radio (quite bad at 50MHz, but also significant from 25MHz-150MHz). The interference is being caused by the driver (I can outline how this was diagnosed if helpful; the radiation all seems to be coming from the transformer though it decreases a little when I add common mode chokes to the AC input and DC output wires). This has to get fixed.

I have been reading many of the related questions regarding LED drivers and have learned a lot. Am experimenting with capacitors and ferrite to reduce the RFI. Ultimately, I suspect I will end up replacing the driver. How do I know the new driver will be any better than the current one? What should I look for? Are there any certifications that matter? There are plenty to select from at the usual electronics component stores.

In case it helps, I think this is the driver with the RFI condition: https://www.dhgate.com/store/product/led-driver-input-ac85v-265v-output-36-63v/259582128.html The resemblance is uncanny; the specifications are the same, but my driver's PCB has the DC output wires slightly closer together. 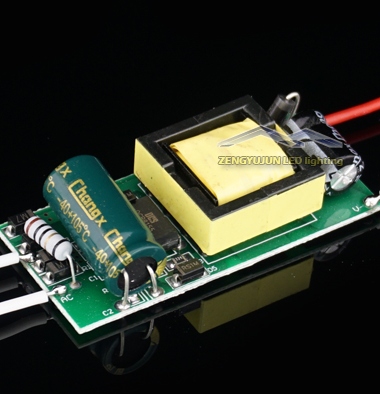 EMI is a major problem with LED drivers, especially in automobiles.
And there are many methods to minimize.

It's very likely a combination of things.
The electrical design, the PCB layout, and no enclosure.

Discontinuous currents are the most likely to generate EMI. I do not see an inductor on the output so it can't be pretty.

A CC driver should then smooth out the on of off pulses which is typically done with a inductor with an inductance tuned to the switching frequency. High frequency switching allows the use of smaller less expensive inductors, and vise versa.

This image shows the on and off pulses (LX) that are regulating the current.
The ILED shows the pulses after they go through the inductor and output capacitors.

This is an example of continuous conduction.
Meaning the current through the LEDs never goes to zero. 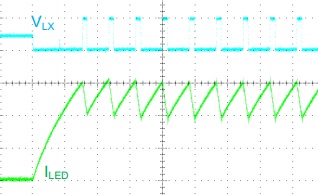 This is an example of ILED in discontinuous conduction mode.

The parts highlighted in yellow are not part of the constant current stage. They are added to minimize conductive EMI output to the power source.

The upper right hand is the "input EMI" filter to minimize conductive EMI back to the power source (input).

A 1µF cap was put across the output to the string of LEDs. This cap and a ferrite bead was added to minimize the radiated EMI. 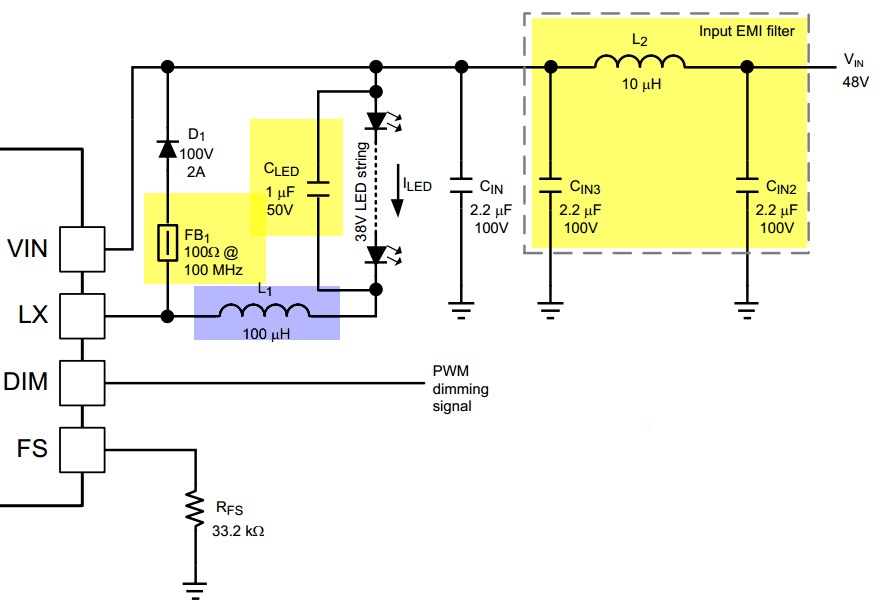 You need to use a battery powered radio and an electric powered radio to determine if the source is conductive EMI from the power wires and or from radiated EMI (airwaves).

The PCB design is very important for minimizing radiated EMI.
The tracks on the PCB are antennas.

I always have two PCB layers for ground and power. Even if the PCB lay could be done on two layers, I use a four layer board with the two power and ground. If I can do a single sided layout and do not expect huge EMI issues I will use the one layer for ground.

When I design a product I enclose it in an aluminum box where the bottom and top overlap and leaves no gaps (almost air tight).

Any connectors are EMI shielded. If AC mains is used for power a EMI filter is added to the power line.

If you want it done right, the driver used by the high end LED fixtures is the Mean Well HLG line.

Mean Well is the only vendor I use for CC or CV power supplies. 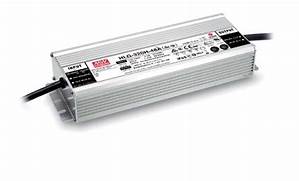 Not the answer you're looking for? Browse other questions tagged emc led-driver specifications or ask your own question.