I have seen many questions along these lines but I don't think any is an exact match (if that's incorrect, please just point me to the right match, that would be great and save everyone some time). Apologies in advance for missing or incomplete information, I'll be happy to update with anything that is needed for a complete answer.

I've bought automotive "side rear clearance" lights to use in a Halloween costume. According to the Amazon description (https://www.amazon.com/gp/product/B01MEG40NI/ref=oh_aui_detailpage_o02_s00?ie=UTF8&psc=1) they're "3-LED" but I was not able to find any other data sheet information. I know nothing beyond 20-years-ago high school physics about electricity.

I want to run two of these red 3-LED lights from battery power, for as long as possible on Halloween night, without catching my battery/battery pack on fire, or constantly changing batteries.

Answers to similar questions seem to presuppose that I know or can find out the amount of current that these lights "want" to draw. Do I in fact need to know that, and absent information from the manufacturer, how could I find it out or estimate it?

Without knowing the current these lights want, I want to figure out how to power these lights with alkaline batteries - I have 9V and AA handy. I'd like a run time of say 5+ hours.

I notice that I can't seem to power off of 1 or 2 AA batteries in series, but can off of 3 or more in series. Is that of any help (other than knowing I will need say 4AA worth (=~6V) (or more) voltage)?

I have a lot to learn, and appreciate your patience - like I said I'm happy to clarify as needed or seek out resources on my own. Would greatly appreciate any guidance, information, answers, etc. Thanks!

Edit: Here's the opened unit. The black box in the lower right is labeled R1 and written on it is "221". I don't see what I think of as LEDs, but these square dealies across the center are labled LD2 and LD3 (middle and right, the left I might have obliterated the label). 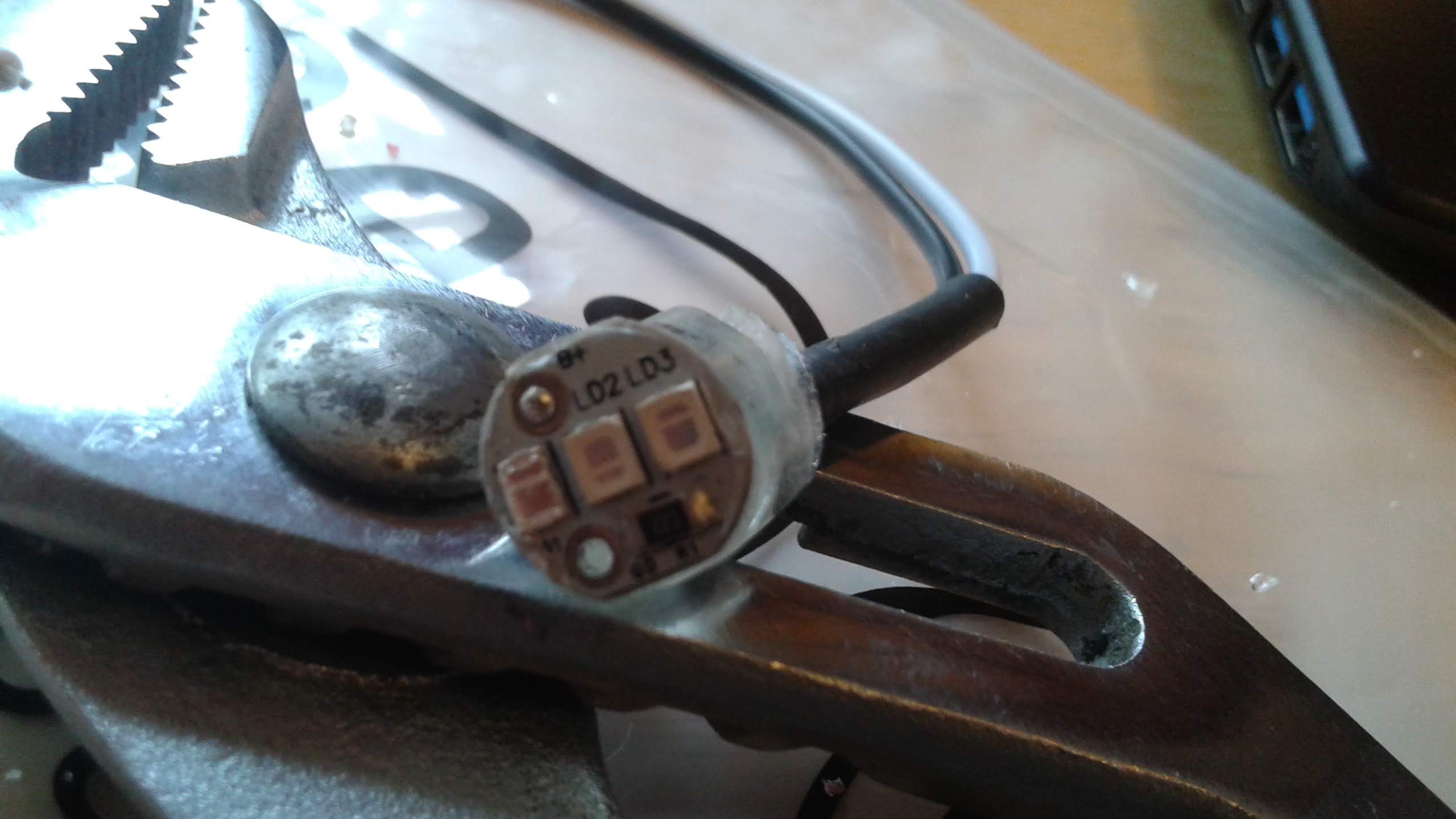 A single 9V alkaline battery will easily power both LEDs at full (9V) brightness for 10 hours.

This is more complex than the typical LED circuit where you select the LED, resistor, and battery. This is a little more complex. Here we have three unknown red LEDs with a fixed resistor.

With time the battery voltage will continuously drop and the current will decrease as the voltage drops. so we cannot just say we have a 20 mA load and a 1000 mAh battery.

The amp hour rating of a battery is from full power discharging down to a cutoff voltage. 1.5V alkaline batteries have a cutoff of 0.8V. A 9V battery has a cutoff of 4.8 (six times 0.8V).

I wanted to see for myself how the advice given actually worked out.
I bought ten of these LED lamps from the link provided.
They came with 40 AAA/LR03 Phillips "Power Alkaline batteries.
I used six of them in serial for testing.

The 6-9V measurements were lower than I would expect with respect to 12V so retested and results were confirmed. I then also used another LED and at 12, 9, and 7V and got very similar results: 45, 22, 5 mA.

Current measurements were made measuring the voltage across a 0.01 Ω 1% resistor in series with the LED.

I estimate the LED could have easily lasted more than another 40 hours.

After 40 hours of viewing the LED brightness in my office, I took it back to the lab and compared the brightness to another LED on my bench supply at 9V. The difference was nearly imperceptible.

I would go with a 9V alkaline battery for each LED.
One alkaline could power both, I prefer a margin of error.
If I used one 9V alkaline for both, I'd bring and extra battery.

so saying a 9V alkaline will last 20-40 hours for one LED lamp is very reasonable.
And very safe to say a single 9V alkaline could power both LEDs for 5+ hours.

A 9V battery actually has six AAAA cells in them. 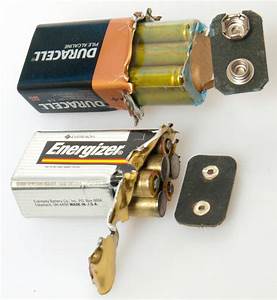 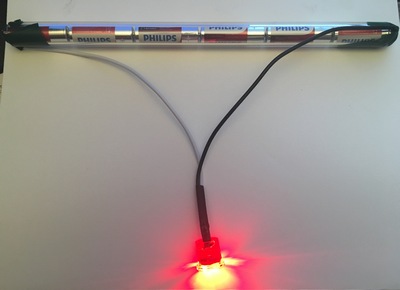 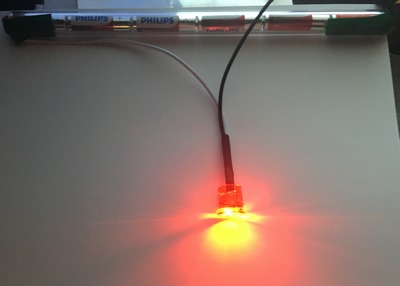 Red with cover sawed off 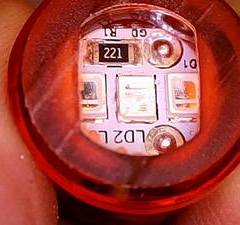 These are peculiar LEDs. There is a metallic coating with a mirror like finish and a very small hole for the light to exit. In the above photo you can see the mirror in the center LED and the reflection of the red plastic on the right side of the right LED. Below the red regions are the mirror coating.

The LED on the left, all the red light (washed out in photo) comes from the little hole, The one on the right I scratched off some of the coating and it appears brighter. Still emits all red (not white as it appears in photo). 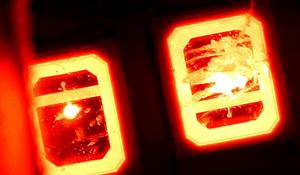 To run these from battery you would likely need a 12V battery.
My guess is that each lamp contains 3 LEDs and a resistor to set the brightness.

If you can, you should rewire the 3 LEDs in each lamp to be powered individually rather than 3 in series.

We can estimate the battery life. If each lamp draws 30 mA, for 6 hours of run time you will need a 180 mAH battery for each LED.

I can definitely verify that I can get these light units to light up with less than 12V input. Is that important/relevant? For example, they'll light when I attach the wires to both sides of a 9v battery, or to 4 AAs in series.

Four AAs, that's good, only 6V.
Are they bright enough for you with the four AAs?

The problem I see with AA alkaline is the voltage drops fairly fast.

But the Ultimate Lithium start at a higher voltage and do not drop much over the battery lifespan.

This is a AA, but the AAA will work just as well for you.

you mention that each (LED I think, not 3-LED light) draws 20mA - how do you know that?

I don't know, I said "let's say..."
20 mA is a good guess.
If you could measure the current that would be a big help in determining how long the various battery choices would last.
Otherwise you can only find pout how long by experimenting as I suggested.

Not what I was expecting. This appears too well made for the price. 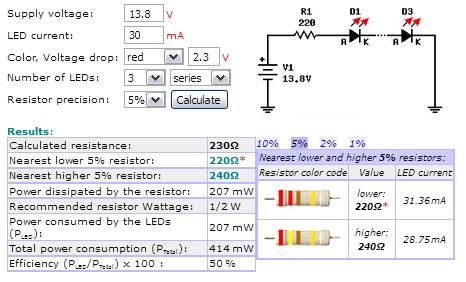 The bad news is, if the above is true then with four AA at 6V then there would only be about 1 mA flowing.

The good news is any voltage over 6V will work. The higher the voltage, up to 14V, the brighter they will be.

If you have the capability to add a resistor you could make them bright with as little as 7V, maybe 6V. At 9V I estimate they will be half as bright at 9V as at 12V.

The big question is how bright are the LEDs with four AA compared to the when they are powered with 9 or 12V?

This can be done easily with three 9V batteries in series. You will get 27 volts when the batteries are fresh.

As others already suggested, i believe each lamp unit contains 3 LEDs in series connected to a current limiting resistor possibly a 330 ohm to be powered by automotive voltage 12V.

My suggestion will be like this. You connect the two lamp units in series so that they will be happy to be powered by 24V.

Now you can power them safely from 27V. You don't have to worry about extra 3 volt, that won't cause any harm because automotive voltage ratings can go as high as 14V which means the LEDs guaranteed to work just fine even at 28V.

Ps; Advantage of this scheme will be the running time of the lamps will greatly increased because three 9V batteries have more energy storage. You can definitely use this longer than 5 hours.

Not the answer you're looking for? Browse other questions tagged led batteries safety or ask your own question.

4
How to build an external lithium battery pack for a laptop with 19V DC input?
0
Powering an old two box metal detector
1
How big should battery be to power two strips of led for few hours?
0
DIY 18650 charge pack questions
6
Diy 18650 4s battery pack [How to charge, how to build?]
1
3 AA batteries vs. USB battery pack?
0
How to build a 18650 battery pack without a spot welder?
1
Powering LED strips with batteries