My LED Christmas light strings do not have a series limiting resistor, how is this achieved? They are 70 LED strings with two 35 bulb sections. I have carefully checked and there are no provisions in the plug or inline with the wire. I measured resistance from sockets back to plug and measured no impedance. What am I missing? Can the the LEDS be made (doped) so the internal resistance be high enough that as a group they provide sufficient impedance?

If you are willing to watch "Big Clive's" vlog, he uses the "easiest" method of finding the resistors, a thermal imaging camera.

In the 220V set he found 3 resistors in 3 of the LED bases, the rest had no resistor. Each resistor was 510R for a total of 1530\$\Omega\$. He also says he found a bridge rectifier molded into the bit where the wires split. 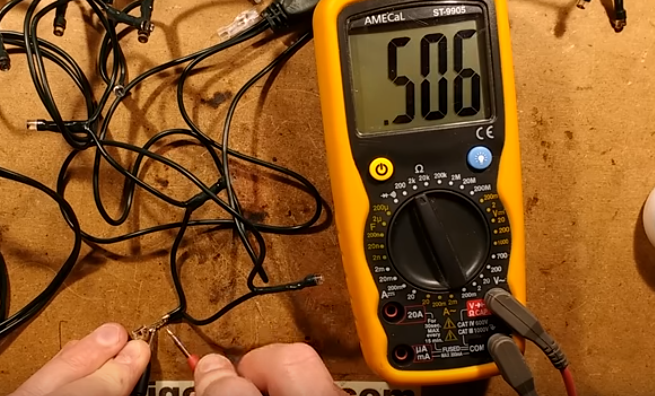 That was for an apparently Polish made set. It's certainly possible that other sets use variations on this theme but you get the idea. Bridge rectifier plus a few hidden resistors distributed out among the LEDs (to spread out the heat dissipation, otherwise they could use just one resistor).

Not the answer you're looking for? Browse other questions tagged led-matrix or ask your own question.