How to reduce transformer secondary voltage?

Trying to make a bench power supply. What would be a cheap easy way to reduce voltage (to protect the series pass transistor)? 3 Amp transformer has these terminals 12-6-0-6-12. No load voltage is 33 VAC (47 Vpeak DC). Primary taps are 0 and 230V. I came up with these options, and can't decide between them.

I'm leaning towards #1 right now (couple of $0.15 switches). Power supply will be used for analog work mostly (test op amps and audio amplifiers etc and other hobby electronics stuff). Is the inability to smoothly change voltage from zero to 30V or 40V, a likely hindrance? I don't think I've ever had to change voltage by more than ±3V for anything (usually characterizing LED, or optimizing current draw for small projects). Why would someone want to smoothly change voltage all the way from 0 to 30V? Only convenience, or something more?

I'm hoping this works out, as transformers seem to cost less than a third of a good 36V SMPS (same wattage). Only problem with transformers is the >40V at no load, and then it goes downhill.

After the thought provoking comments above, I decided to operate on the transformer for some flexibility. I carefully removed the 6V and Common connections from the binding posts, and isolated them. So now I have four 6V windings. The transformer capability is shown below (Amps DC on X axis, VDC (regulated) on Y axis, for the 4 windings if connected in series). 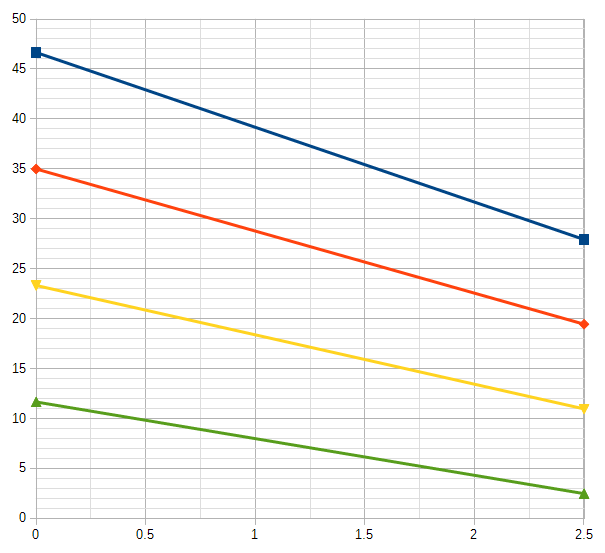 There is a toggle switch to connect/disconnect common terminals (see long wire near wire marked "common"). There will be no short circuit due to the bridge. I will lose a few volts, but hopefully the amps and flexibility will make up for it.

Not the answer you're looking for? Browse other questions tagged power-supply voltage transformer or ask your own question.