I bought a cheap drone to get into flying quadcopters and it seems it has only one big issue at that price, which is a very long failsafe time of 20 seconds, i.e. if the remote signal is lost, the drone keeps buzzing for 20 more seconds until it cuts off its engines. As an absolute beginner pilot living in a crowded city, that sounds terrifying. The package hasn't arrived yet, but I started thinking of ways to mitigate that, ideally without modifying the flight controller board. I've been dabbling with small electronics projects for a while, but still a beginner there as well.

What I came up with is using a cheap 433 MHz rx/tx pair (like this one https://randomnerdtutorials.com/rf-433mhz-transmitter-receiver-module-with-arduino/), with the rx + a reset switch controlling a FET latch circuit placed between the battery and the drone's VCC, and the tx on the ground emitting a constant signal while connected to a variable voltage source to adjust range. Therefore, when the 433 rx loses signal, the latch would shut down all battery power and the whole thing crashes on the spot.

A datasheet I found on the 433 pair said that the rx data output is maximum VCC/2, which is around 1.85 V for a 3.7 V drone battery. I think that's enough to drive an NFET. My main questions are:

TL;DR: I want to control a drone battery with a 433 MHz receiver's data output by sending an always-on signal to a FET latch circuit. Is this feasible?

I'd interface to your FET with this 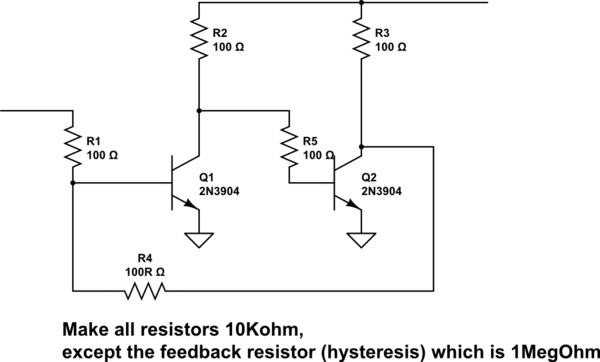 Not the answer you're looking for? Browse other questions tagged circuit-design 433mhz drone or ask your own question.