I have an idea that I am trying to explore. I use 48V headway cell packs to power my various electric bicycle projects. Trying to balance charge a 16s pack can be a problem. I had the idea of using less expensive single cell charging boards, that way every cell would be charged to the right level, no stopping the charging process by the BMS when a cell gets too high.

I purchased some of these to test with, PCB single cell charge board , but before I try to install them I thought, shouldn't these be isolated?

With this setup also, a smaller 5V PSU with enough amps could be integrated into the pack also so it can be charged anywhere.. you dont need a big charger at a location.

The Arduino in the picture is just an idea. It would monitor pack and cell voltages like a BMS. I think the overall cost on this would be more than a BMS and a charger, but I think the benefit from it would be much greater! 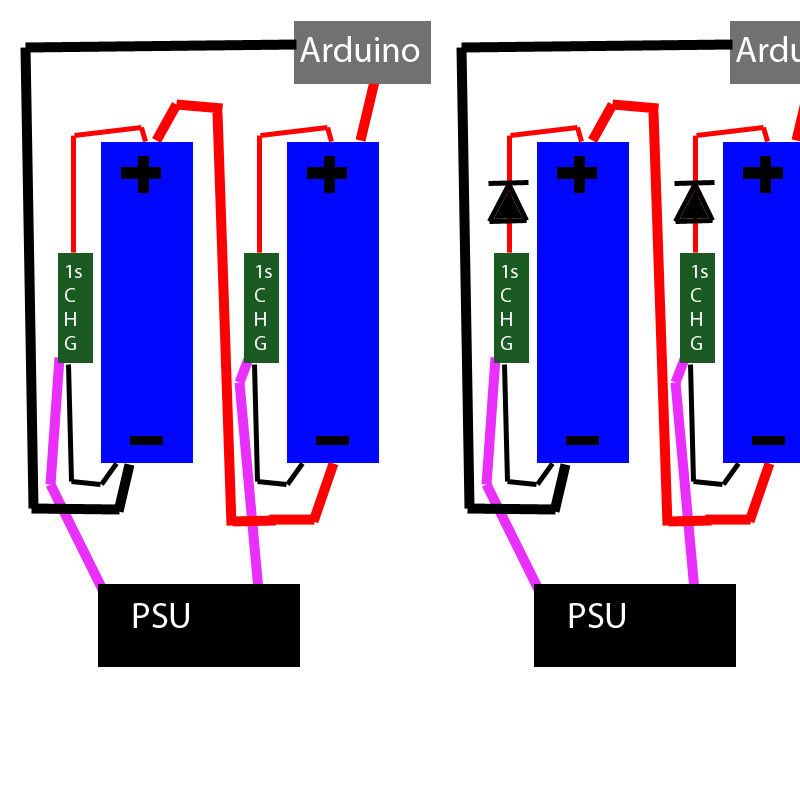 As mentioned in your comments your drawing is not accurate so lets put that aside for now.

Yes it is theoretically possible to charge the individual cells in series. To achieve this your will need 16 individual Li-ion/LiPo charges that are fully isolated.

The output of each charger would need to be directly connected to each individual cell. Then they can charge each cell individually with no issue.

Alternatively dismantle the battery pack and place the individual cells into individual chargers. Thus allowing all the cells to be charged in parallel.

Disadvantages: Requires extensive modification of the battery packs. Either through dismantling of bring out wires from each node and the ends. This does have risk. What happens when the wires from the cell's are accidentally shorted? As the wires can carry the full load and have a low impedance path to the cell's they pose a fire hazard. So you will need to be careful fitting these wires and provide protection to them all.

Alternative is to charge all the cells in series with short circuit protection and only have the two wires coming out from the pack and have discharge resistors across individual cells that can be switched on for charge balancing ... also known as the BMS which you already have.

I strongly advise against making modifications to the battery pack to without seriously considering the hazards and mitigating against them.