Why hasn't my LED burned out by now?

I have a 15 year old ReplayTV DVR. I got it used, I'm not sure when, but probably about a decade ago. It's turned on almost all the time, and it has a blue power LED on the front.

The LED FAQ says that many LEDs have a rated lifetime of 50,000 hours, which implies that it should only last about 5.5 years when used 24x7. Green Efficient Homes says that "an individual LED may well last 100,000 hours", so that bumps it up to 11 years.

Why has this little guy been able to keep shining continuously for so long?

Properly designed, built and used, today's LEDs have incredibly long lives and the wearout mechanisms are not catastrophic in nature. So instead of using incandescent lamp MTTF statistics, a luminosity percentage (70%) is often used to define the lifetime. This doesn't mean that the LED burns out, it means that the light output is only 70% of what it was when brand new. Because the change is slow, you normally don't notice it.

For white light applications this makes sense because after a period of time the light works, but may be too dim to be useful in the application such as a flashlight or reading lamp.

FWIW incandescent lamps are prone to something similar in that the filament would slowly evaporate leaving a dark coating on the glass shell, dimming the light. They are able to compensate a little bit because the filament glows a bit brighter due to the increased resistance (until it breaks).

Best guesstimate I have for an indicator LED life span is more than 5,000,000 hours.

I don't think anyone would be surprised if a micro controller lasted 10-15 years. More likely one would EXPECT one to last that long. Think about how many pn junctions could fail in a microcontroller. An LED has only one pn junction. An indicator LED will last longer than anyone can live to find out.

Indicator LEDs would likely never fail in your lifetime. The average human life time is now about 78 years or 683,280 hrs. Indicator LEDs can last longer than that.

The power supply (the weakest link in most products) powering the LED in the DVR has lasted 15 years (23,400 hrs).

Reliability is based on not only the LED but the system the LED is used in. 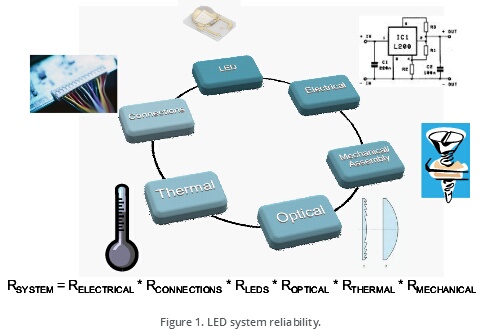 LEDs rarely die. LED light bulbs die because the driver failed.
The rating on an LED lifespan is based on lumen maintenance.

A common specification for high power lighting LEDs is for 70% lumen maintenance (that is, output at 70% of its peak intensity) after 50,000 hours of operation.

The most notable industry standard is the IES LM-80 (LM-80), which is according to the U.S. Department of Energy an “approved method for measuring lumen depreciation of solid-state (LED) light sources, arrays and modules,” (U.S. DOE).

This Lumiled white paper covers the topic in detail:
Evaluating the Lifetime Behavior of LED Systems

I took Lumileds 149,000 hr estimate graph (Fig 5) and extrapolated it to 1,000,000 hrs. Keeping in mind this is a high power LED tested at high temperature. Indicator LEDs last much longer. 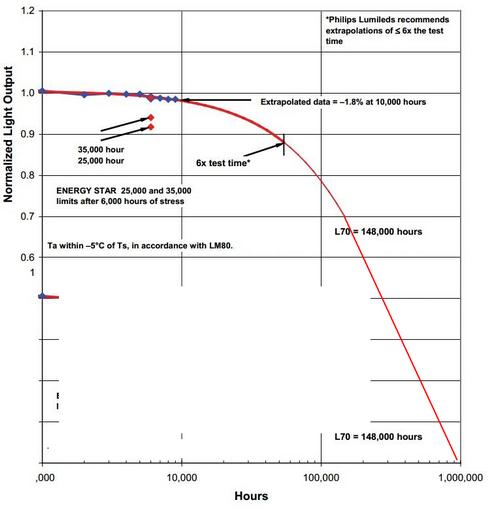 Rule of thumb is the life of a semiconductor is reduced by 50% for each 10° C rise in temperature. In the LM-80 testing a junction temperature of over 130° C is used (120 °C ambient is specified). And indicator LED runs at room temperature. So for that well over 5X longer for an indicator. This is where I get my best guesstimate I have is 5,000,000 hours.

That is for lighting LEDs. Indicator LEDs have always been know for very high reliability. AT&T was one of the first to see this.

At the end of the 1960s AT&T Bell Laboratories immediately realized that there were many possible applications for LEDs. Indicator lamps. were becoming useful in the telephone business. All such lights used at that time in the USA operated using 110 V. An example is the “Princess” telephone, which was intended to be used in bedrooms – the dial lit up when the phone was picked up from its cradle. The “Princess” was a prestigious telephone and the latest fad in the 1960s but had to be installed near a 110 V outlet. A service call to the local phone company was needed if the bulb burned out. If LEDs were to replace the 110 V light bulbs, the phone line could power the LEDs and a 110 V outlet would no longer be needed. In addition, GaP LEDs had an expected lifetime exceeding 50 years when used in telephones, much longer than 110 V light bulbs...

The reliability of AlGaAs devices is known to be lower than that of AlGaInP devices that do not contain any AlGaAs. High-Al-content AlGaAs layers are subject to oxidation and corrosion, thereby lowering the device lifetime.

If a 110 V GaP lasted 50 years then a 2V LED should last much longer. As the IV characteristics of LED have improved the lifespan has also improved. 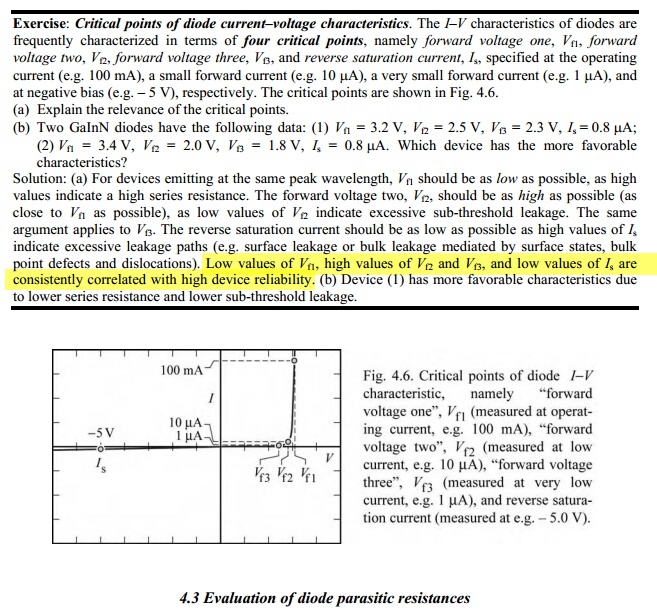 This is at the essence of the issue.

Additionally, LED lightbulbs are a much more demanding application than indicator LEDs. The LEDs in a lightbulb are often run close to their maximum design power, at high temperatures. This causes them to age more rapidly than an indicator LED, which is usually only run at the power required to make it visibly light up.

Indicator LEDs typically have a useful lifespan measured in decades. The brightness of the LED may decrease slightly as it ages, but it is rare for one to "burn out".

The indicator LED is quite possibly not operated at nominal power.

The lifetime of an LED is typically specified at nominal power. As blue LEDs are quite annoying indicator lights, these are often dimmed down to a less annoying brightness (for example, nominal specified current is 20mA, the actual operating current in a specific device is just 3mA). This increases the useful lifetime of the LED significantly.

That is in addition to the other answers. The LED will be dimmer by now than when it was new, but it's still useful as an indicator light.

The rating is only a MTBF (mean time between failure)

The MTBF is a figure used in calculations for the reliability of items of equipment. In order to be able to calculate the MTBF of the equipment, it is necessary to know the MTBF of the individual components, e.g. the LED MTBF in this case.

The failure rate for a component, and the MTBF are linked. MTBF can be calculated as the inverse of the failure rate if it is assumed that there is a constant failure rate, which is not unreasonable as a first order assumption.

The MTBF figures are often quoted in the manufacturers data sheets. However the MTBF can be considerably reduced by operating components close to their rated limits. Hostile environments such as high temperature and vibration also reduce the MTBF.

However when run within their limits, the LED lamps have a long lifetime, and do not fail very often.

Without a sample population and testing of that specific LED it will be impossible to tell what the lifetime of that LED is. the manufacturer can only guarantee through what they know about that LED (probably through running it through months worth of testing, measuring the degradation) and then extrapolating that over the lifetime. They then guarantee an MTBF figure and if you get a batch of their LED's on average, they will last more than x amount of hours. But they could last more, the MTBF figure is only a lower bound.

Estimations of life expectancy of electronic components is a tricky business. As one can imagine, manufacturer can't wait 50,000 hours (or something like 2,290,000,000 hours for a RS232 receiver, see page 7 of this essay) to collect statistics of device failures, market doesn't allow this. All estimations are done using "accelerated models".

The idea is to set a batch of devices under extreme conditions (voltage, current, temperature, environmental factors) until some devices fail in a reasonable test time (days or hours), assuming no shift in failure mechanisms. Then, using some theoretical models of failure mechanisms and other ASSUMPTIONS, the failure rate gets extrapolated to normal operating conditions. Usually the theoretical models are of exponential type, so small errors during accelerated testing can result in vast differences in estimations for tails of these exponential functions. So the models are usually on a conservative side, to avoid liabilities from catastrophic premature failures.

For example, if the accelerated model for a LED did include the air humidity and rust/oxidation factor, but your LED was always at room and dry air conditions, it can last much-much longer than the manufacturer's specified MTBF.

Those times are rated lifetimes and can be very conservative. So it might well be that most or (in case you are lucky) some of them can handle a factor times more, so 15 years sounds not unreasonable.

If the rated lifetime is warrantied, or even relied on, then the manufacturer may be being conservative and/or limiting itself to what it knows to be true, rather than what it expects to be true. It may have to defend itself in a lawsuit!

Blue LEDs did not become widely available as cheap indicator LEDs until the late 1990s. In 2010 a manufacturer might not have had much more than a decade's experience of the devices, and it would therefore be risky to state a life expectancy of more than ten years because theory and "accelerated ageing" laboratory experimentation can not substitute for two decades of actual use in the field.

There are reasons to hope that disk drives can last ten years in service, LED light bulbs over twenty, solar panels well over thirty. But experience may triumph over hope, and there are presently "known unknowns" concerning the long-term ageing characteristics of such products which only the passage of much time can make known.

First as the others have said the lifespan of the LED is a MTBF, second, some manufacturers strobe lights at very high speed, so the light is actually off a fair amount of the time, your eyes just can't register it. This is often done to decrease battery consumption, but I suppose could also be used to increase lifespan.

They run a bunch of LEDs for 50,000 hours and none of them burn out. So they say on the package "Guaranteed for at least 50,000 hours". To guarantee a LED for 20 years would require them to run it for 20 years to test it.

Also, there's a probability of an external event, such as a static discharge, causing an LED failure. This rather small probability influences the 50,000 hours vs 100,000 hours rating.

Not the answer you're looking for? Browse other questions tagged led components heat lifetime or ask your own question.