Why not use a ferrite bead around an RS-232 cable?

This is from the instruction manual of a printer: 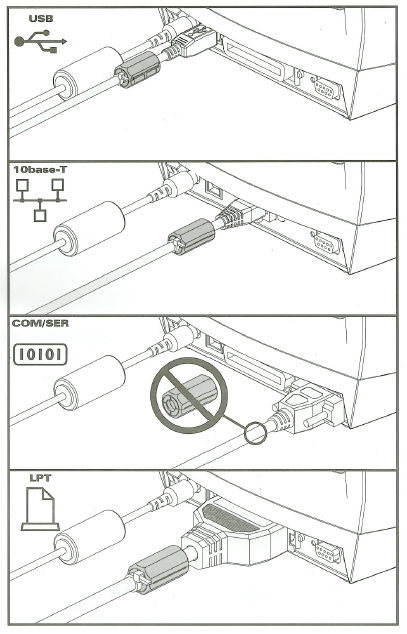 As you can see, one is not supposed to wrap the supplied bead around the serial cable. What is the reason for this?

The bead may have a higher reactance than resistance at low frequencies, which could cause things like undershoot spikes to increase rather than decrease. Most likely these spikes will cause the higher voltage 12V signal to go beyond acceptable limits for RS232 and possible damage the devices. The other connection are all at lower voltages.

I honestly can't think of a valid electrical reason not to use the ferrite on the RS-232 cable. The ferrite acts as a common-mode choke that prevents RF interference from travelling along the cable, primarily in its shield.

Also, the speed of signaling on both RS-232 and the printer port are about the same (on the order of 100 kHz max.), so that wouldn't explain the difference, either.

Not the answer you're looking for? Browse other questions tagged interface transmission-line communication ferrite-bead or ask your own question.