Does this diode need to be replaced with a higher current rating diode?

In an application simulation a fly-back diode 1N4001 current is peaking upto 3A and decays to zero in around 25ms as shown below: 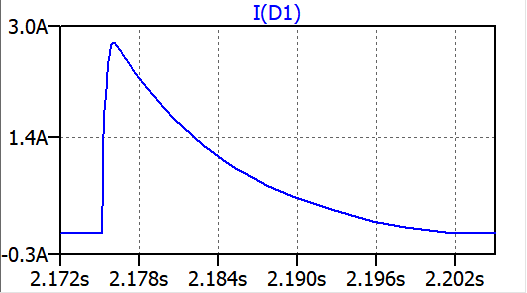 The datasheet says the max forward current is 1A. But it also says 30A for 8.3 ms.

In my case it is a peak decaying from 3A to zero in 25ms.

Do I need to change this diode? What can be an alternative?

In the case of pulse loading to a component, it's the \$I^2t\$ that matters. This is a measure of the heat that's dumped essentially instantaneously into the device raising its temperature. 30A peak half sinewave pulse for 8.3mS is an \$I^2t\$ of about 3.7.

You can either integrate your graph properly, or do a simpler conservative upper bound and say that it's less than a full 3A flowing continuously for 25mS, which is an \$I^2t\$ of 0.225. This figure is so much less than 3.7 that's it's clear it will handle your proposed pulse with no trouble.

That rating is for a single pulse, with the diode cooling down between pulses. Is your flyback diode going to be hit repeatedly in a time less than the cooling down time? If so, you need to compute the average power that those pulses deliver, and make sure that's well below the continuous power rating.

The issue is how hot do various bits of the device get. Continuous current ratings are calculated based on the total thermal resistance of the device to ambient. For short, infrequent pulses the thermal capacity of the device matters. For short repeating pulses, the thermal capacity, the thermal time constants, and the dissipation to ambient of the device all matter. For complicated devices (or critical applications) there may be more than one time constant to worry about (i.e., a 1ms pulse of energy W may be OK because it can dissipate into surrounding silicon and packaging, but the same amount of energy in 1us may fry the junction or parts thereof, because the heat doesn't have time to move).

If you study this data sheet from Diodes, Inc., you'll see that they have charts on voltage drop vs. current (which you need to determine power vs. current, which isn't really proportional to either I or I^2), current vs. ambient temperature which you can use to deduce the thermal resistance from case to ambient*, and curent vs. number of repetitive cycles at 60Hz, from which you can get a notion of the thermal time constant from the junction to ambient. From all of that, you can determine whether you're safe.

But to reiterate -- you should be fine. Look at Figure 3, and figure that your 25ms is less than two full cycles at 60Hz, and figure that they're allowing you more than 20A peak for a half sine-wave. The average current of a half sine wave is somewhere around 0.68 * peak (it's 2/pi or something -- I'd have to calculate it to remember), so that works out to 15A for 33ms. Even being really fast and loose with the numbers, it's obvious that you'll be fine with 3A for 25ms, unless your ambient temperature is way closer to 175C than it is to 65C (see their figure 1).

* Said thermal path is through the leads, see Note 3 to the maximum ratings table.

7
Inductive kick-back voltage calculation
4
Problem modelling NPN transistor BE junction in LTSpice
0
LED Voltage Drop Confusion
0
What current rating does my kickback diode need to have?
1
Is a diode's forward voltage stable enough to be used as a reference voltage?
1
Selecting Flyback Diode for Inductive Load
0
Protecting voltage sources against pushing or shorting into each other
1
How these two diodes used in the ciruit protect from the voltage spikes?
1
Using diodes for reverse polarity protection
6
Diode forward current with µV..mV forward bias