Are there any reasons I shouldn’t use a nodemcu’s 3.3v pin with this component?

I have this Hydrogen Sulfide gas sensor and the datasheet says the supply voltage requires a regulated voltage with a min of 2.6v and max of 3.6v

I can’t find any datasheet for the nodemcu v3 (spent hours looking, but none mention anything relevant) that’s says whether or not the power output of the 3.3 pin is regulated (how can I tell?) but others have said an Arduino Uno’s 5v and 3.3v pins are regulated. Assuming it is regulated (I know what they say about assumptions), are there any reasons why I should be concerned about using the 3.3 pin?

What about using the aforementioned Arduino Uno, whose power pins are regulated?

This sensor is kinda pricey and I don’t want to burn it out due to stupidity.

The 3v3 rails of both NodeMCU and Arduino boards should indeed be regulated.

The more meaningful question is how much current they are able to safely provide to external devices. On Arduino boards where the MCU runs at 5v, the 3v3 rails are often produced by an on-chip regulator in the USB interface and don't have much current to spare.

In the NodeMCU case, the ESP8266 (or ESP32) is itself running off 3v3 so typically a SOT223 or SOT23-5 regulator is used. These generally have higher current capacity.

The data sheet for your device implies it draws 4 mA from the supply. Almost any discrete regulator would be chosen with enough margin to be able to supply that along with the on-board loads. It's fairly likely even the USB-chip's weak 3v3 supply as found in an Arduino could handle this, as long as you were not adding additional things as well.

It may be that using a separate regulator or various LC filtering approaches would yield a quieter sensor reading, but it would be worth seeing what you get in the easy case before worrying about that.

The Node MCU is supposed to have a regulated 3.3V supply (as with most, if not all micro breakout boards). The only snag is that different manufacturers/versions may use different regulators. You could lookup the datasheet for the regulator on your board to know for sure the current capability. 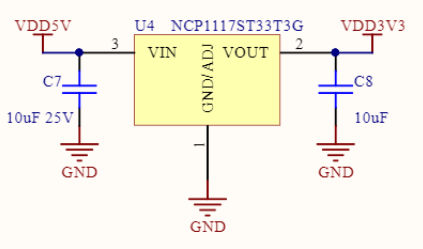 However, as I mentioned, there are other variants: 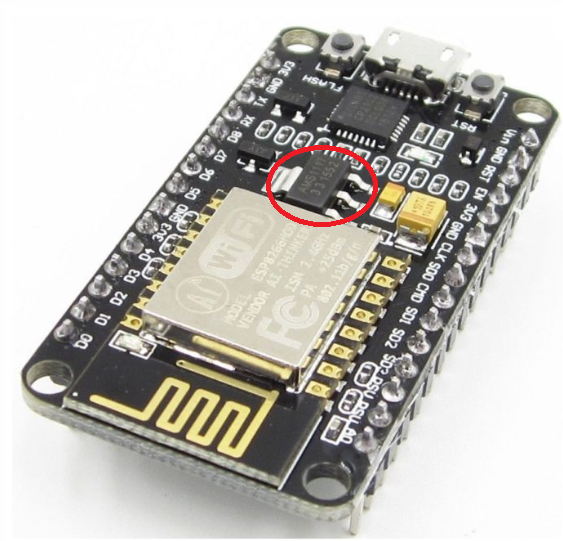 Here is one datasheet from Advanced Monolithic Systems, stating that the AMS1117 has a current limit of 1.1A "typical", and 1.5A max. Here is another datasheet that states 1.5A "typical", and shows no max. Fishy.
I would feel safer keeping it under 1A, or even 800mA.

As @ChrisStratton said, your sensor uses only 4mA. Thus it's probably safe to assume that your 3.3V regulator can afford the minute extra load.

Not the answer you're looking for? Browse other questions tagged power nodemcu gas-sensor or ask your own question.

5
How to detect SD Card Insertion Without Leakage Current
0
Is there any way to combine data with power?
1
Are there any effective estimates for up-rating resistors power capability by adding airflow?
4
Are there any advantages to either DC barrel connector polarity?
1
NodeMCU with two MQ gas sensors requiring multiple analog pins
2
Is it safe to use this relay with mains voltage?
2
Are there any electrical components which may keep electricity inside them after the device is turned off?
1
How to get right voltage output with Bts7960b H-Bridge?
0
Boosting current to trigger 3v relay