Can someone explain how I turned on a circuit by touching it?

I was just trying to learn how a transistor actually works by tinkering around myself. I have an Arduino running a flashing light program. I hooked up an NPN transistor to test out how I can make it into a switch by limiting the base pin with a potentiometer. So, I have the emitter hooked to ground, Collector hooked to the LED which goes to positive. Now I put a resistor in the base pin spot and when I touch the resistor, it turns on the circuit. From the little research I did, I learned that humans can emit a voltage? How true is this or am I just messing up a circuit somehow?

So I gather that you have something like the schematic below, except that I added R1 because I can't bear to draw a device for burning out LEDs and transistors.

You're in a room that has a strong electric field at 50 or 60Hz, and you're a fairly large conductor compared to the bare base lead of the transistor. You've got some small resistance to ground, and the transistor base leaks to ground anyway.

So what the base of the transistor sees when you touch it is a fairly strong line-frequency source in series with a small-valued capacitor, and maybe a large-valued resistor. This combination is enough to pump current into the base of the transistor on the peaks of the electrical cycle. Apparently in your case, that causes enough collector current to make the LED visible. 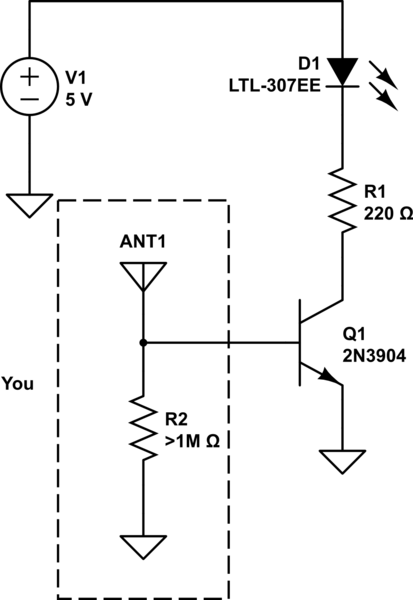 Not the answer you're looking for? Browse other questions tagged power transistors led npn or ask your own question.

2
Transistor With No Voltage to Base
6
Make adjustable mosfet constant current source
1
using transistor to switch 3v from 2
1
does NPN transistor allow current to flow when applying +ve to base from diff battery?
2
NPN transistor wired correctly?
2
Can someone explain how this oscillator circuit works?
1
Need help understanding PNP Base into NPN Collecter circuit for LED Array
1
Where did the base get the current from?