MOSFET - shorting the gate and source

I am currently in the fourth year of my bachelor's degree and my knowledge on this is really really really very limited, but i got a simulation circuit of an isolated dc-dc converter from my senior and im supposed to identify the losses of the circuit, mainly at the inverter, the transformer and the output rectifier.

From what i found out, synchronous rectification can reduce the losses at the output but switching the switch on at the same time the current flows through the diode, hence reducing power losses and improving efficiency. Looking at the secondary side of the transformer, so basically the gate and source of the MOSFET is shorted so that only the body diode is used, to replicate a normal output rectifier. I was told that this was done because synchronous rectification will be applied later on in the process(that's why MOSFETs are used instead of diodes), but because the controller for sync rect is not done yet, and this was done to replicate a normal diode output rectifier.

But I heard that doing this is not good, and shouldn't be used in an actual circuit, but what exactly about shorting the gate and source is not good in an NMOS? (As far as i know, the thing that destroys an nmos is only if you short the drain to source. I might be wrong :x)

Also about the recovery time etc. of the body diode being worse than a normal diode and stuff, too many things that im not too sure about. 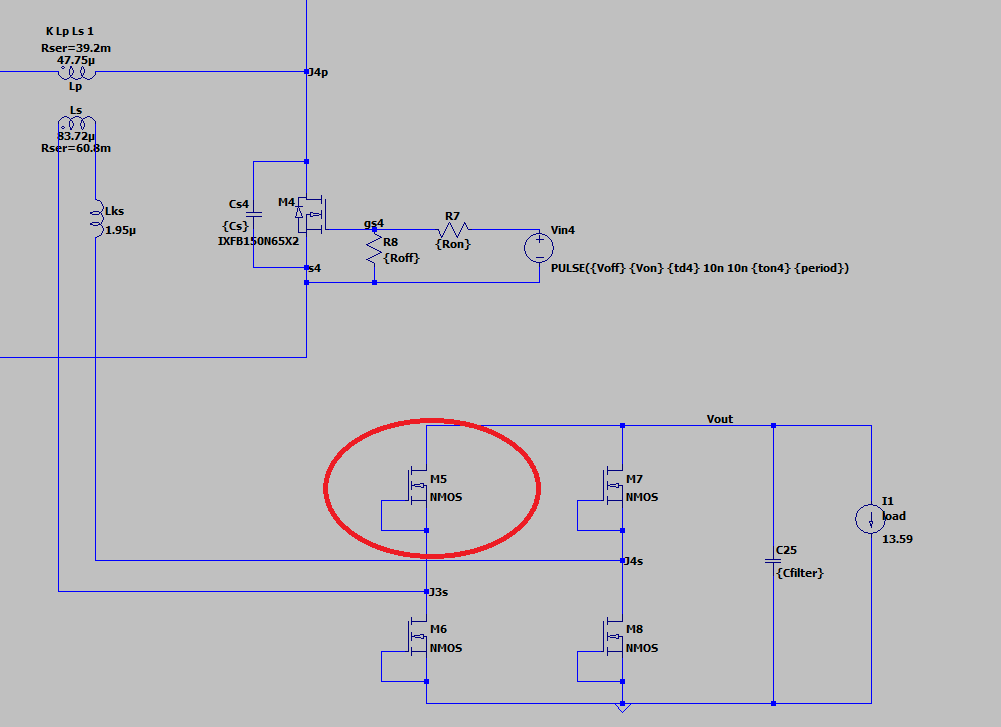 EDIT: Additional question, one more question is that if you look at the MOSFET on the primary side it has a diode connected parallel to it(i was told that this is the body diode and not an external diode), but on the secondary side the ideal NMOS doesnt have the body diode shown. Why is that?

If the gate is tied low, then the mosfet won't turn on (like the two lower mosfets in your circuit) It will then function like a really high value resistor, and would be pretty pointless to use a mosfet like this in a circuit. Modern mosfets also have reverse current protection with a body diode (some have this left out)

EDIT: Additional question, one more question is that if you look at the MOSFET on the primary side it has a diode connected parallel to it(i was told that this is the body diode and not an external diode), but on the secondary side the ideal NMOS doesnt have the body diode shown. Why is that?

You need to check the mosfet spice model to see if it has a built in diode into the model. In spice it is all up to you to know what your modeling, if you really wanted to you could put in any circuit file tied to what looks like a mosfet.

Not the answer you're looking for? Browse other questions tagged mosfet diodes rectifier output or ask your own question.