How do phosporus atoms affect the conductivity of a doped semiconductor?

Free electrons come from electrons in the Phosphorus atom when it excites to the conduction band. This leave an ion, what effect does this positive ion have on the flow of electrons? 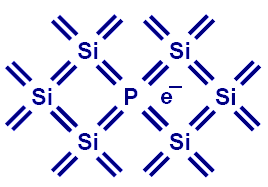 I'll try a simple explanation (by this I mean I won't be scrupulous about how I describe things) that addresses this:

"what effect does this positive ion have on the flow of electrons?"

Physicists had to come up with a reference point for energy. (Different in some ways, but not entirely unlike selecting a ground reference in electronic circuits.) They've long since chosen a hypothetical spot that is "at infinity" for that purpose. So for orbital mechanics, they consider the total orbital energy of a planet (kinetic plus potential) as a negative value, since it would take energy to push the planet out of its orbit and into "infinity" away from us. Positive energy would be for an object that is not captured, so that kind of object would be something following a hyperbolic path. For example, the interstellar asteroid Oumuamua would be assigned a positive energy value. (A parabolic path has the energy of exactly zero.)

For atoms, they've decided similarly. An electron in an orbit around a nucleus has negative energy with respect to it "leaving" the atom and heading off away from it towards "infinity" (which is treated as zero energy, once the electron completely leaves the atom and is free.)

These are convenient and shared reference points in physics.

Each electron orbital has an energy associated with it, with respect to this zero reference point far, far away from the atom. We mostly ignore all the electrons in the inner (more negative) energy states, both in chemistry and in electronics, because extreme collisions are required to jostle them out. Besides the inherent energy required to break them away from the atom to this zero-point, they also have clouds of electrons to penetrate in order to get free, too. So they stay in place for any normal situation we humans are likely to see. However, the outer-most (those with the least negative energy states) electrons are labeled "valence." All of the electrons are in orbits of some kind. But only the outermost ones are given the special name of "valence."

For example, phosphorus has 5 valence electrons. That doesn't mean it has 5 electrons. It means only that there are 5 of them in the so-called outer shell. When pressed into a solid state of matter, such as a silicon crystal lattice, 4 of these 5 valence electrons will "pair up" with the 4 valence electrons in the nearby four silicon atoms (tetrahedral arrangement.) But one of them remains unpaired.

The unpaired electron, it turns out in the phosphorus case, is still attached to the phosphorus atom. It's just... "unnatural" to the lattice structure of silicon. You can kind of think of it this way: because 4 of the phosphorus valence electrons are bound at unnatural angles to nearby silicon atoms in this silicon lattice structure, this last remaining valence electron (the 5th) is "almost loose." It's not loose. But almost. It wouldn't take a lot of energy to kick it up to the conduction band where it could move.

Thermal energy is distributed throughout a system of particles, as vibrations spread out into each degree of available freedom to hold them. It's possible that all of the energy would be found in only one of those modes, but given the sheer statistical numbers involved that is "nearly" impossible. So the mean energy of any particular mode is very predictable. At room temperature the thermal voltage is \$\frac{k\cdot T}{q}\approx 26\:\text{mV}\$. But this is also equivalent to \$26\:\text{meV}\$. As I said, I think phosphorus's introduction into the lattice has a typical "distance" for this 5th electron of about \$50\:\text{meV}\$, or so, to get from its valence energy to some available spot in the conduction band. Given that \$26\:\text{meV}\$ is an average over quintillions of modes, it's relatively easy to find sufficient energy to knock these electrons into the conduction band. And with all this available thermal energy present throughout the lattice, the effect is to pretty much keep on bouncing that 5th electron away from the phosphorus as a valence electron and into the conduction band as a conduction band electron. Of course, the space charge still needs to be neutral. So it's not as though the electrons will all drift over into some corner of the material. Instead, all that has happened is that the electron was jostled into the conduction band and that means it can move lots more easily than before. But it still sticks around, falls back into the phosphorus orbital, then gets kicked back out again, and so on. It's an "equilibrium state" of a vigorous situation with electrons kicked out and falling back. But the lattice remains neutral through all of this.

However, because of the thermal energy and because of taking the trouble to stick those phosphorus atoms into the lattice just this way, pretty much all of the 5th electrons, from each phosphorus atom present, becomes a conduction band electron. Very close to all, or 1:1 here. (Because silicon, by itself, has a work function of about \$1.1\:\text{eV}\$, almost none of its valence electrons are moved up into the conduction band.)

So the effect of adding phosphorus is to make it a lot easier for electrons (almost entirely from phosphorus), at normal temperatures, to move into the conduction band. This means lower resistivity for the material. The positive charges of the phosphorus atoms who "lost" their 5th valence are still compensated (neutralized) by the presence of nearby electrons in the conduction band. But so long as you supply new electrons at one end, you can also then remove some much more easily now at another end (it takes less of a voltage difference to cause a given "current" to occur.) But nothing really changes regarding the neutrality, so the phosphorus atoms do not hinder the flow. The 5th phosphorus valence electrons are still like hot popcorn, popping into the conduction band and falling back down and then popping back up, etc.

If the phosphorus wasn't added and this was pure silicon, then the thermal energy would need to somehow conspire to add up a lot of those \$26\:\text{meV}\$ average modes into a single kick that is \$1.1\:\text{eV}\$ or more. And those events are quite rare at room temperatures. They happen. Just not often.

Now, things get slightly more complicated. There is a mass-action law to keep track of (\$n_i^2=n\cdot p\$) and there actually are holes in this material, too. You can see that the mass-action law isn't complicated. In this case, I compute something like about \$5\times 10^5\$ holes. Not many. In other words, although there are holes and these holes also contribute to conductivity, it turns out there are so few of them present that you don't really need to worry about them. You usually just ignore that term. There is also a concept called "mobility" and this is different for electrons than it is for holes. The mobility of an electron is about 2-3 times more than a hole, in this case. Yet another reason that these few holes can be mostly ignored.

Temperature, of course, affects the numbers. By now, you should have that burned into you. I think Misiakos & Tsamakis, "Accurate Measurements of the silicon intrinsic carrier density from 78 to 340 K," 1993, is the most recent paper I've seen on the temperature dependence. I won't bother you with the equation they derived for \$n_{i\left(T\right)}\$. I just want you to know that there are scientists who keep these details updated, from time to time.

But let's finish this with a quick calculation. First, for pure silicon without the dopant. Then, as doped indicated above. I'll use \$\mu_n=1500\$ and \$\mu_p=450\$ as the mobilities given the concentration I've suggested for phosphorus (which is close enough to both cases for use here.)

(Once again there is another dependence. These mobilities themselves will actually be different at different concentrations, too. So you need to go find tables, or something, when doing this stuff for real. I just looked up those numbers a few minutes ago.)

For pure silicon (mass-action says there are equal numbers of holes and conduction band electrons, so we have to take both into account):

Now, for the doped version. Here, as I pointed out above, we can simply ignore the hole density (which truly does not affect the result, I promise):

Quite a difference that the dopant makes. This is about a factor of 25,000!!

I hope I haven't passed along any wrong ideas above. But I'm a hobbyist and no professional by any stretch. So I do make mistakes. Keep that in mind as you read further on your own.

How about an ELI5 answer: the positive phosphorus prevents all the donated mobile electrons from flying outwards because of self-repulsion between negatives. If positive ions weren't there, then the doped silicon would soon run out of mobile electrons and become insulating again, but all the floors, walls, and bystanders would be negatively charged because of the free electrons fleeing from any p-type semiconductors.

Or in other words, the "free" electrons in doped silicon aren't really free; they're only mobile. They're bound inside the bulk silicon by their elestrostatic attraction to the positive dopant ions trapped in the solid. If silicon is like a little tiny "electricity pipe," then those positive ions are like the walls which keep the electricity inside the pipe.

Not the answer you're looking for? Browse other questions tagged physics solid-state-devices or ask your own question.