How to fake an encoder signal with one function generator?

I wish to be able to have a encoder quadrature signal that I could set the frequency to some specified values (from 10 to 60 Hz). I have a function gen that fulfills the freq requirements but it has only one output.

So the question: is there some kind of circuit (analog or IC) that I could use to add 90 degrees of phase to a signal generated by a function gen, and then use both as they were the outputs of the encoder. It means that the gain should be unitary as well.

If something got misunderstood please ask.

Thanks for any help!!!

I would try following approach: 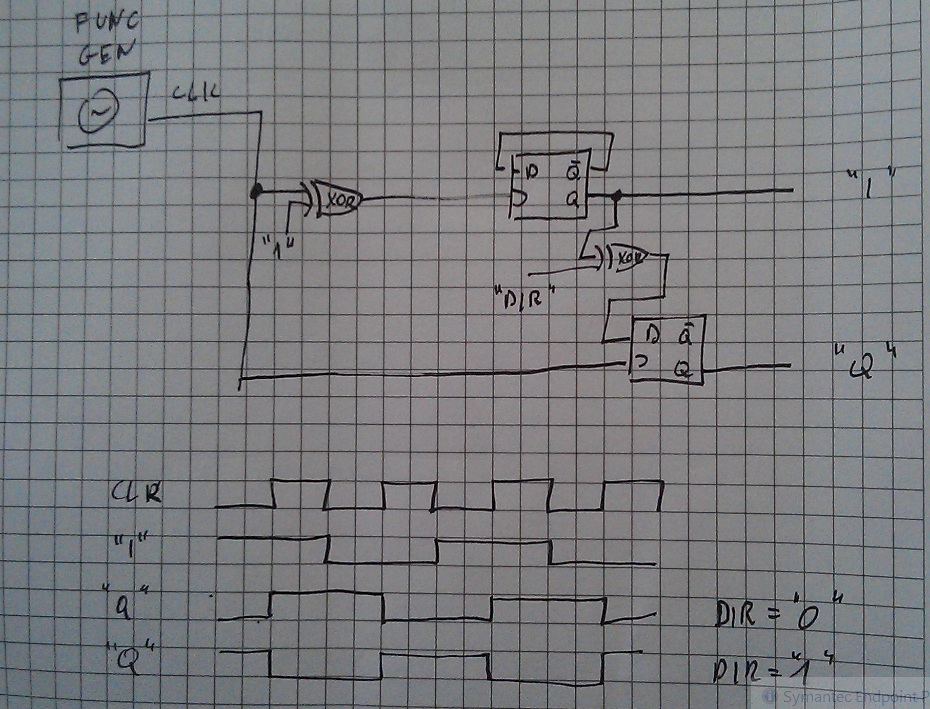 *) I have just drawn it without any simulations or prototyping. It is not guaranteed to work, but you get the idea.

Like Dave says an RC filter will give you a delay, which emulates the quadrature signal. Use a Schmitt-trigger to follow the filter. Unless you use a potmeter for the resistor the RC time constant will be fixed, while your frequency varies. That means that the phase shift will vary as well. To make sure you don't get more than 180° shift you could calculate the RC time for about 90° at the highest frequency, then at the lower frequency it will be less than that. 90° at 60 Hz is 4 ms, then depending on the Schmitt-trigger's threshold levels the RC time constant should be around 5 ms. A 4.7 kΩ resistor + a 1 µF capacitor will do the trick, or 47 kΩ + 100 nF, for instance.

You don't really need 90° of phase shift across the whole frequency range you're interested in, you just need enough of a fixed delay so that the circuit you're driving can distinguish the two edges.

A simple R-C circuit followed by a buffer or gate should do the trick; if you use an XOR gate, you can use the other input of the gate to reverse the apparent direction of movement by switching it from low to high.

A two-chip approach which would allow "smooth" control of start/stop and direction would be to use a quad flop with complementary outputs (e.g. 74HC175) and a 4x2 multiplexer chip (e.g. 74HC153). Drive two of the flop inputs with the inputs that should control speed and direction (they can equally easily be wired to behave as "run" and "direction", or "run CW" and "run CCW"). The other two flop inputs should be tied to the outputs of the multiplexer. The multiplexer "select" inputs should be tied to the first two flop outputs (the ones controlled by the direction inputs). The "data" inputs to the multiplexers should be wired such to yield the desired behavior for the various direction modes:

Wiring the circuit in that fashion should yield clean outputs that will move up or down by one click per cycle when the directional buttons are pushed, and remain stationary when the buttons are released, with no "weird" actions on a button press or release. The addition of a 74HC174 would make possible a "single-step" feature (bringing the circuit total up to three chips plus the function generator that produces the clock).

Not the answer you're looking for? Browse other questions tagged generator encoder function or ask your own question.

5
How to interface a quadrature encoder with PIC?
0
What component (IC) to use for collecting A and !A signals into a single TTL signal?
1
Measuring rotations problem with motor encoder
2
Measuring phase difference between digital signals
2
Quadrature encoder has one synced edge and one phase-shifted edge, is this a special encoding scheme?
3
Power amp for function generator
1
How to handle rotary encoder overflow
0
Quadrature Encoder Interface Circuit