I'm building a boost converter and want to implement a shutdown feature. The particular chip I'm using, LM3478, has a shutdown feature which is activated by a high level on the frequency adjust pin. In this case, I'm assuming a high level would be 12V since the chip is powered by 12V. The control signal I will be using will be from an MCU which has an output level of 3.3V.

I cannot simply use a P-channel MOSFET since 3.3V at the gate is not enough to turn the MOSFET off if the source voltage is 12V. I could use a PNP transistor since it is current controlled but that would require the control signal to be open-collector (tri-stated to turn off, low to pull up).

Is there a better way to do this?

But for more confusion see also note 5. The two sentences seem contradictory to me.

EDIT: Here's a pic of what I'm talking about. Push-pull totem output is internal to the microprocessor. You should reduce \$R_{FA}\$ by the output resistance of the totem pole, which is in the vicinity of 25 ohms. It's in the micro's datasheet. 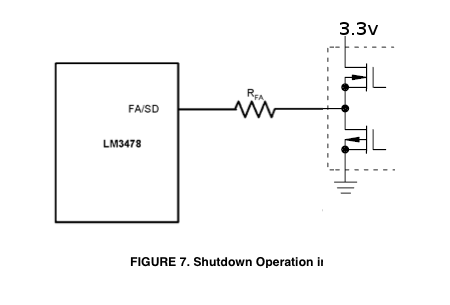 Not the answer you're looking for? Browse other questions tagged transistors mosfet pnp pullup or ask your own question.