I know this is a silly question but I cannot find ant data indicated it will not. The HV connector rated at 300A @ 85C and it is a 600A fuse, I cannot find a connector with a higher current rating.

The contentious current is 100A, however if 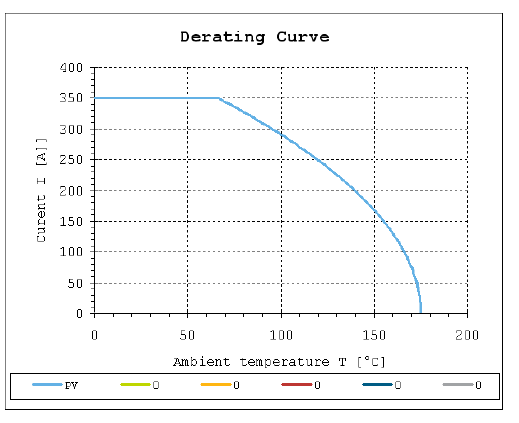 Unless there is a specifically noted "peak current" spec that is higher than the "rated current" spec, you have to assume that the peak current cannot the maximum rated current. 5 seconds is long enough that it can generally be considered "continuous" anyway.

It seems pretty clear that pushing 600A (let alone 1200A) through a connector rated for 300A is way out of spec. Of course, being out of spec doesn't guarantee that the connector will fail... but I wouldn't count on it working.

Also, take a look at the opening time curves on your fuse. Your 600A fuse will take 10 seconds to blow at about 2400 (!!!!) amps. This is typical - fuses never have nice, sharp cutoffs - there is a large range between their rated (continuous) current and the current that opens them quickly.

If, in that 5 seconds, you can prevent melting the solder, then you probably OK.

Do your thick wires (wires the size of battery cables in a CAR, right?) have enough thermal mass to keep both the wires and the CONNECTOR PINS below the temperature of melting solder?

Caveat----why not be cautious and avoid fires, avoid intermittents later?

Not the answer you're looking for? Browse other questions tagged current connector high-voltage fuses high-current or ask your own question.

1
Why does a 10A fuse blow at 10A and 5V or 10A and 500V?
7
Fuse: why does it connect in parallel with resistor?
5
Filtering Capacitors before the fuse or after the fuse while limiting inrush current?
2
Does an AC rated fuse blow at the same current DC
1
Will the fuse blow for long time use?
2
combine fuse holder and connector
1
Maximum fuse rating before a MOV (varistor)
0
Why does fuse rating not coincide with max power of device?