Non-inverting output of transistor circuit (at NPN base) is 0.69V max. why?

I tried to make a simple NPN transistor inverter so that I can use the strobe line of the parallel port to store data in two separate flip-flop IC's. (74HC174 and 74HC574) The IC that data will be stored in is based on whether the strobe is on the falling edge or the rising edge.

I connected everything including this circuit and there is no smoke, no heat or anything. I could assume my resistor choices are terrible, but I'm not sure, especially with how many changes there are to PC port designs.

For reference, the parallel port I'm using is coming from a dell laptop and I specifically disabled ACPI.

When I tested the particular circuit shown, The voltages I get from the NPN base are 0.09 and 0.69V. However, the NPN collector voltages are acceptable (0.0 something, and 4.9 something).

What would cause the NPN base voltage to be so low in both cases and how do I fix it? 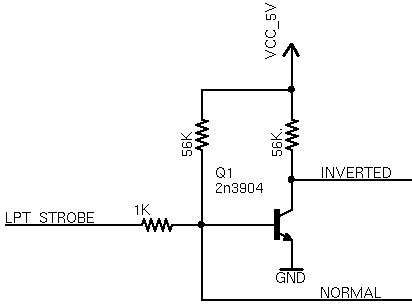 The transistor base is not an output of this circuit.

It is where the input signal connects to the transistor. There is not expected to be any gain between the input and this node.

If you want a non-inverted output with gain, you can add another CE stage.

Or if you want both inverting and non-inverting outputs with equal amplitudes from a single circuit, you could add an inverting buffer circuit (perhaps based on an op-amp).

Or if you just want a non-inverted replica of the input signal to drive another high-input-impedance circuit, you should just connect to LPT_STROBE rather than to NORMAL. If you want to connect more than 2 or 3 of these same circuits to a single CMOS output, you'll probably want to increase the value of the input resistor to something more than 1 kohm, though.

Note: As Bimplerekkie points out in comments, you could have much higher fan-out if you used an n-channel MOSFET in place of the BJT in your circuit.

Or just buy a CMOS buffer and inverter chips. One-gate versions are typically less than $0.10 in reasonable volumes, so buying the one-chip solution is usually cheaper than what you pay to place all the extra resistors in a discrete inverter circuit.

The 0.69V is caused by the base loading (it's effectively a forward biased diode) and that is exactly to be expected.

There is no way to "fix it" with a BJT in that position and output drawn from the base, it's doing what is expected. You can, however, substitute a different part or hack the PCB to draw the output from the input.

The 2N7000 suggested by @Bimpelrekkie (assuming a TO-92 package as well as the 2N3904) has a compatible pinout so you can just mount it instead.

The maximum voltage across the base-emitter junction of an NPN trasistor is about 0.7 volts.

You could use the LPT_strobe signal (before the 1K base resistor) as your "normal" signal.

Ok, I figured it out. The #1 problem was that the resistor was connected between NPN base and VCC.

All I really needed was resistance from input to base and the NPN collector resistor just like how Q2 is setup in the schematic below with the two resistors connected to it.

Not the answer you're looking for? Browse other questions tagged voltage transistors npn inverting-amplifier parallel-port or ask your own question.