Is it possible to realize an 1:16 impedance ratio Transmission Line Transformer on a single core?

I would like to build a wideband amplifier with a 1:16 impedance ratio Transmission Line Transformer (TLT) at the output. The input port of the TLT accepts a differential signal and provides a differential signal at the output too. The load impedance is 50 Ω. I wonder if this problem can be solved using a single ferrite core and if it is possible, how? 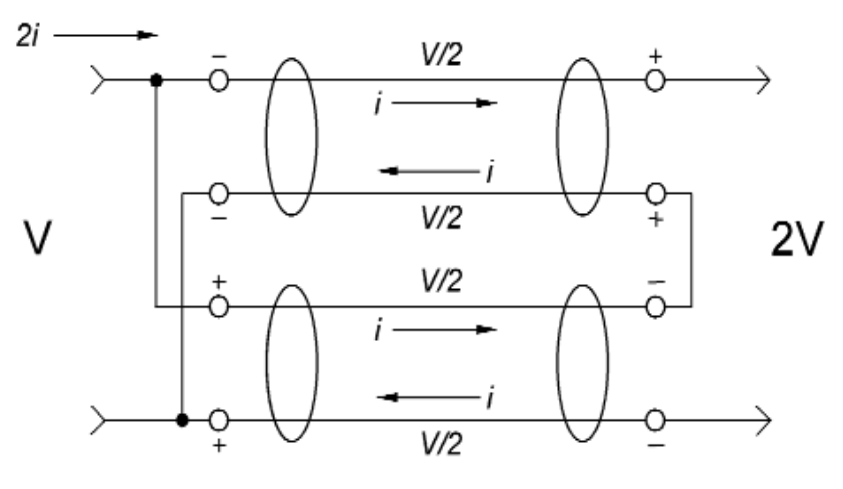 Yes, but it will not handle as much power as one using more cores.

Basically, wrap 4 pairs of wire around the core; connect one side of them in series and the other in parallel. This is wrong.

From Mack and Sevic, Sevic's Transmission Line Transformers, Theory and Practice, 5th Edition, ISBN 978-1-89112-197-5, there is an off-hand mention which directly addresses your core question:

The 1:9 and 1:16 cases [regarding Guanella transformers; the method described and crossed out above], which Sevick found to require separate cores, ...

Since I do not know why Sevick found 1:16 cases required separate cores (Was the bandwidth outside of what he considered acceptable? Were his wires too thick for his cores? Was it ugly?) I don't think this properly answers your question. But it does suggest that what you are looking for is, at the very least, Not Easy.

Having said that, in Chapter 10.4 he shows a way to do it. The transformer there is a multi-ratio transformer on a single core. There are 4 wires wrapped around a toroid and tapped at various locations to provide impedance ratios ranging from 1:1.36 to 1:16. This does not look like a Guanella transformer. The useful frequency range for the 1:16 tap is described as being 1-8MHz. There is a description regarding how to modify it to provide either higher or lower frequencies. It looks like, without the extra taps, this could be what you are looking for.

That transformer is briefly described in this paper: https://www.highfrequencyelectronics.com/Feb04/HFE0204_Sevick.pdf, see Figure 10; the 1:16 ratio is obtained from connecting Tap A to Tap G, an option not described in the paper.

A similar transformer is described in this book: http://www.introni.it/pdf/Amidon%20-%20Transmission%20Line%20Transformers%20Handbook.pdf (see page 53)