Op-amp voltage boost circuit : how does it work?

I want to boost the output voltage of op amp to a higher value. I found the conceptual circuit below online. I understand that Q1 and Q2 are used to provide the necessary supply voltage for the op-amp.

But how do the other parts work ? In particular, the voltage gain is apparently Av=3 (written in the text). How did they arrive at that? Should the (voltage gain)Av not be -33 ?

What is the function of R4 and R3? 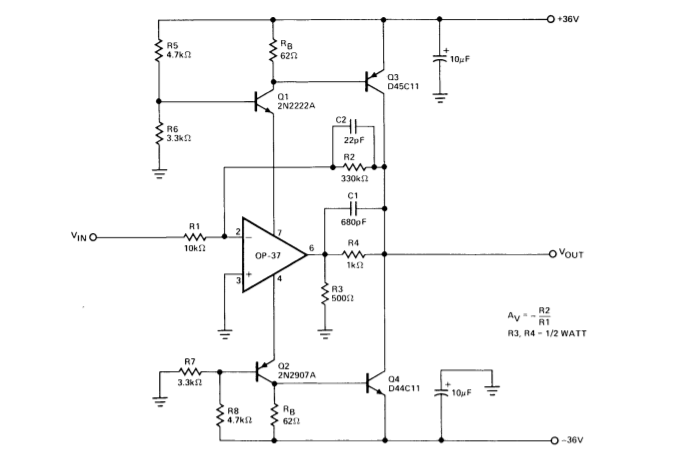 About the gain being stated as \$A_V=3\$, the complete relevant text is

R3 and R4 form an output voltage gain stage whose gain, \$A_V=3\$, is reduced to unity at high frequencies by C1 to maintain stability.

This works because the negative feedback around the op-amp will cause it to push or pull current from its output pin to make it work.

The overall gain of the circuit is 33, as you calculated.

But even within the op-amp integrated circuit itself, of course every stage in the design can have a different gain value.

If the voltage on the op-amp output is not equal to 1/3 of the output voltage (ignoring C1), then current will flow in it's positive or negative power pin. That forms a negative feedback loop composed of the four external capacitors and the op-amps (internal) output stage.

I'm not sure where the Av = 3 part comes from -- it may be the gain of the funky booster stage.

That looks like an old method for doing HV op-amp circuits, before you could just buy HV op amps. The basic idea is that Q1 and Q2 are emitter followers (as you figured out) powering the OP-37. As the OP-37 tries to raise it's output voltage, it draws current from Q1. This lowers the base voltage of Q3, it starts conducting, and voltage (and power) boost happens. Ditto with lowering the output voltage, Q2 and Q4.

I've never tried to design one of these and, frankly, I think if one came up in a design review the first question I'd ask, gently but persistently, would be "are you sure there are no alternatives?" I suspect that -- particularly without careful choice of the op-amp, and some deep knowledge of its innards -- this is just a good way of turning electronics into smoke.

I'd love to hear from someone who does have some experience with a stage like this.

It's a truly rubbish design !

Voltage gain Av is set by R2/R1 and isn't 3 as suggested.

'Loading down' the output with R3 = 500 ohms causes highish (for an op-amp) currents to be drawn from the supply rails which develop a supply current derived voltage that increases with signal level across resistor marked RB (62 ohms) which turns on Q3 and Q4 as the supply current (Iquiescent + Iload) nears 9mA (9mA x 62 ohms = 558mV, the typical Vbe where a silicon BJT turns on.

I wouldn't give it house room to be honest. I'd expect this arrangement to be somewhat 'troublesome' !

4
Lighting either of two LEDs, or none, based on digital input
15
Increasing the compliance voltage range for a variable, two-quadrant constant current pin-driver circuit
5
Unusual opamp topology: driving a dummy load and using supply currents to drive common-source

0
Operational amplifier bandwidth - why does manufacturer tell it's DC when it is not
1
Op Amp Input Offset Voltage vs Common Mode Voltage
1
Current-to-voltage opamp in DAC application: snubber network between inputs
1
Asking about supply voltage of AD8672
0
1-5V to 4-20mA current loop transmitter
3
Why is the output of a high-pass filter not 0 when the input is 0?
1
Op-Amp Input Common Voltage Range for specific gain