Calculating the entropy rate of ADCs

Formally, the entropy of a normal distribution is:-

So if you're sampling a random (normally distributed) signal, that would seem to be the rate of entropy generation. I take it that if the logarithm is base 2, then the entropy would be in units of bits. So a process with a standard deviation of 1V creates 2.05 bits of entropy /sample.

My problem is with the rate calculation. I thought that the entropy rate would be governed by the precision of the samples. A 16 bit ADC must by definition create more sample data than an 8 bit ADC if they both cover the same voltage range. Intuitively more precision suggests more data. More data suggests more entropy.

My question is why does the entropy formula above take no account of sample precision?

Note. I suspect that this is not the appropriate formula for ADCs.

Edit. It's not. I think that I can manage to formulate the min.entropy for a normal distribution. Min. entropy is used in cryptography and randomness extraction and would be good enough. I get:-

for an \$ N \$ bit ADC digitising a range of \$ V_{range} \$ volts. And generally, for any distribution such as a (asymmetrical) log normal that you might get sampling a diode's avalanche noise:-

Thus I think that I had totally the wrong equation...

That's the continuous (differential) entropy; not the entropy of the discrete random variable that your ADC output is!

You could (and seeing your profile page, you'll probably have a lot of fun doing that) look into what is called rate distortion in the field that concerns itself with information entropy, information theory. Essentially, an ADC doesn't "let through" all the entropy entering it, and there's ways of measuring that.

But in this specific case, things are simpler.

Remember: The entropy of a discrete source \$X\$ is the expectation of information

and since your ADC output \$X\$ has very finitely many, countable amounts of output states, the expectation is just a sum of probability of an output \$x\$ times the information of that output:

Practically, that means something immensely simple: Instead of using, say, one 16-bit ADC to digitize your normally distributed phenomenon, use sixteen 1-bit ADCs to observe 16 analog normally distributed entities, and only measure whether the observed value is smaller or larger than the mean value of the normal distribution. That "sign bit" is uniformly distributed over \$\{-1, +1\}\$, and thus, you get one full bit out of every 1-bit ADC, summing to 16 total bits. If your noise source is white (that means: one sample isn't correlated to the next), then you can just sample 16 times as fast as your 16-bit ADC with your 1-bit ADC, and get the full 16 bit of entropy in the same time you would have done one 16-bit analog-to-digital conversion¹.

How many bits of entropy does the quantized normal distribution have?

But you had a very important question: How many bits do you get when you digitize a normal distribution? 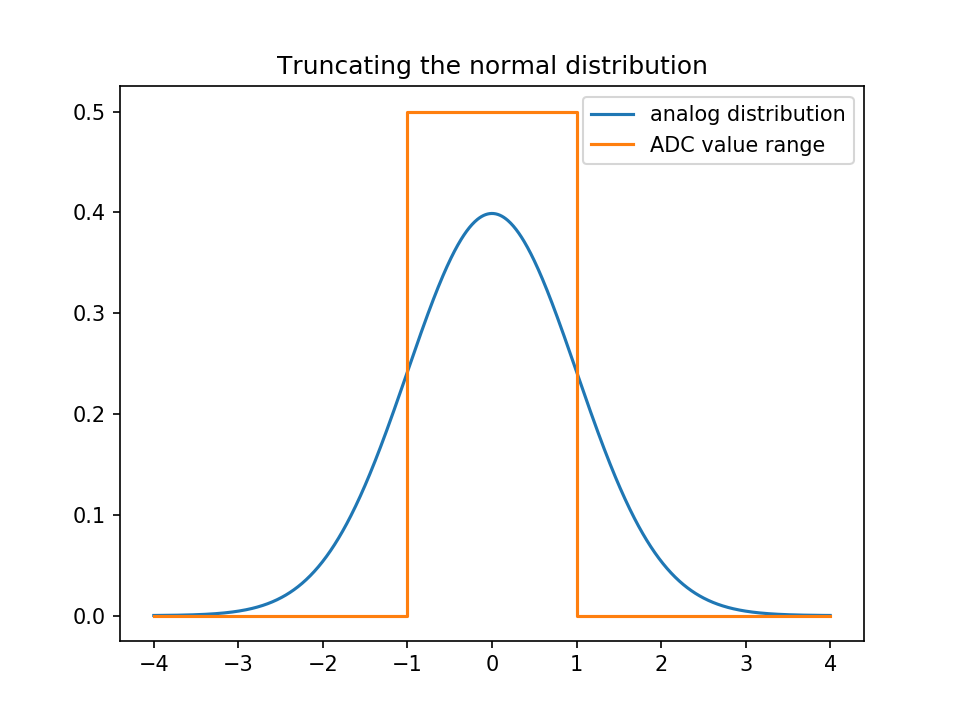 So, what probability do the ADC steps then get?

I'll do the following model:

So, let's plot the information of a 5-bit ADC (which means 4 bits represent the positive values): 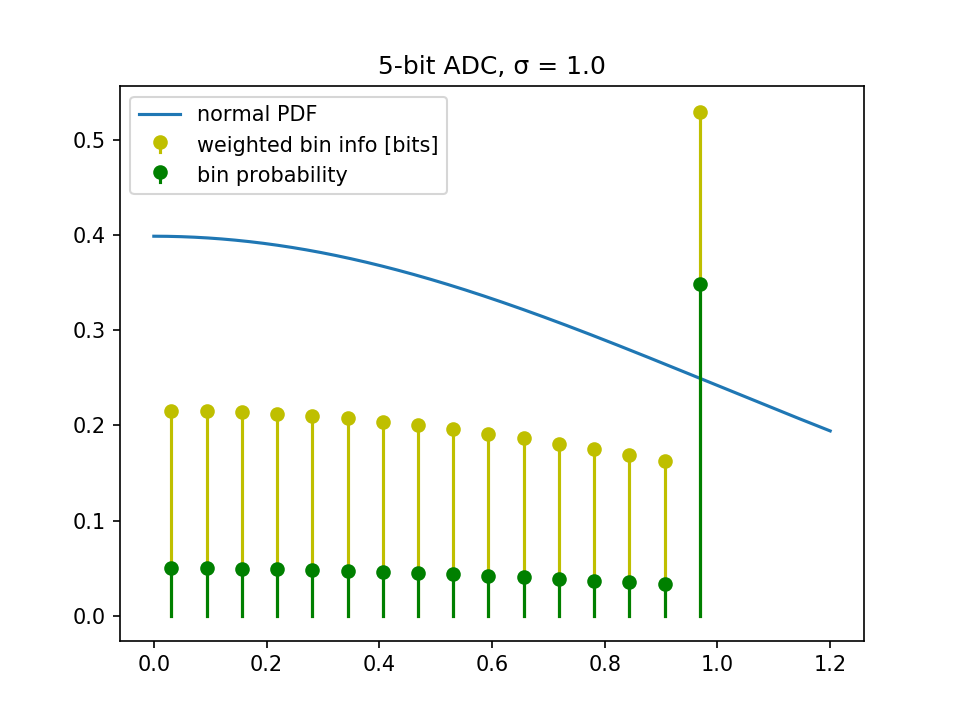 Let's actually do an experiment: Does my ADC pay? We'll simply plot entropy that we get over ADC bits that we pay for. 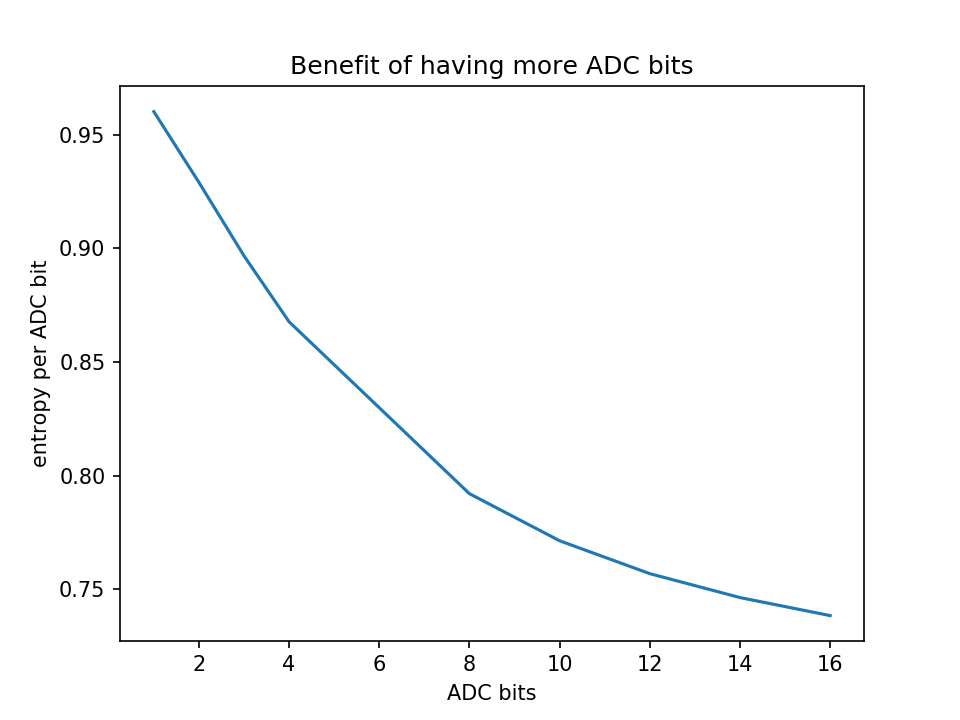 As you can see, you get diminishing returns for added cost; so don't use a high-resolution ADC to digitize a strongly truncated normal distribution

As was rather intuitive from the previous sections, the problem is that the boundary bin accumulates too much probability mass. 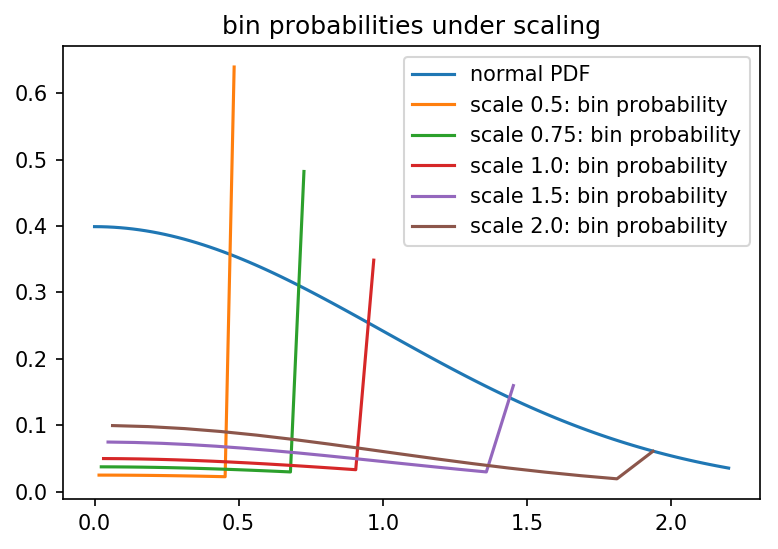 Which confirms our suspicion that there's a maximum entropy you'll get when you "kinda" make your normal distribution look relatively uniform: 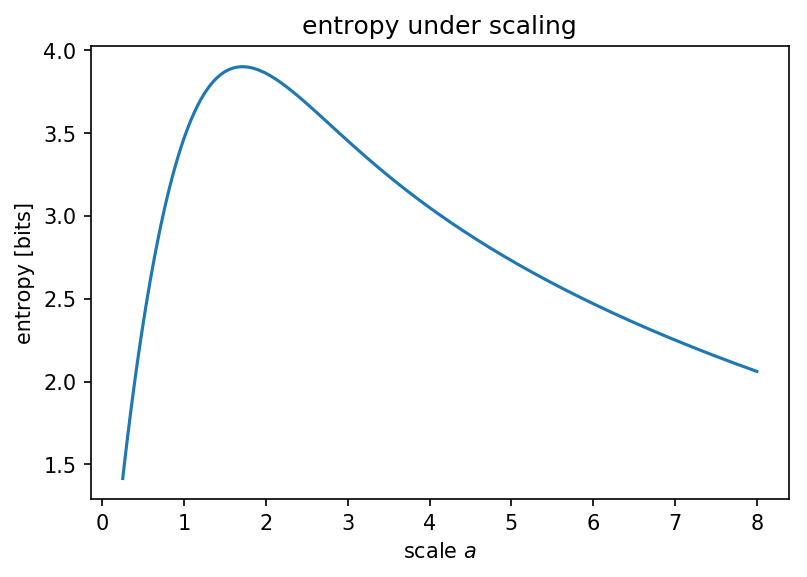 The scripts used to generate above figures can be found on Github.

¹ in fact, you must take a close look at the architecture of your ADC: ADCs are typically not meant to digitize white noise, and thus, many ADC architectures strive to "color" the white noise e.g. by shifting the noise energy to higher frequencies when measuring the output value successively; an introduction to the Delta-Sigma ADC is a must-read here! And I'm certain you'll enjoy that :)
Share
Improve this answer
edited Nov 3 '18 at 13:07
answered Nov 3 '18 at 10:08

Not the answer you're looking for? Browse other questions tagged analog adc signal-processing or ask your own question.

1
Why is it that true random number generators are not in every computer?

8
Shrinking an input signal for the ADC
1
Direct interfacing of analog MEMS microphone to microcontroller ADC
7
Optimal tradeoff between ADC bit depth and sampling rate
0
How can I reduce an oscilloscope's bandwidth to that of an Arduino's ADC?
0
Why is the dB of the FFT plots exceeding 96dB for these signals sampled by an 16 bit ADC
1
Maximum Allowable Noise of ADC Input Signal
0
Calculating sampling frequency off of estimated stop band attenuation
0
DAC update rate vs ADC update rate?
3
ENOB and oversampling ratios for delta-sigma ADCs (in relation to CS5343)