How does the multimeter measure the voltage? [closed]

I am using the fluke 88 multimeter and I know this digital multimeter measure the voltage drops when measuring the current(ampere) in a series connection because the current flows into the multimeter(because it is a series) and it is straight to understand.

However, I have no idea how multimeter works when measuring the voltage with parallel connection.

In brief, I would like to know how multimeter checks the voltage, current and ohm..

Most DMMs use a dual-slope integrating analog to digital converter, such as the classic Intersil ICL7106. There are many more modern variations on this chip, but since this was one of the first, it has extensive applications notes available. (I don't know which chip is used in the Fluke 88, it's definitely something newer than ICL7106, but I'll just refer to ICL7106 since it's pretty much the archetype for all dual-slope DMMs.) Here's a brief overview of its principles of operation:

A capacitor is quickly charged up to the input voltage, then that capacitor is discharged at a controlled rate while a timer counts how long it takes the voltage to return to zero.

The integrating capacitor needs to be low dielectric absorption, so typically it would be mylar / mica / poly instead of ceramic or electrolytic. It's important that all of the charge that is stored in the capacitor during the sampling interval, gets counted during the deintegrate phase, otherwise the DMM will not be accurate.

The display counts are directly driven by the ICL7106, which contains a driver specifically for triplex Liquid-Crystal Display (LCD). There are other variants of this chip for driving LED, or for reporting the count directly to a microcontroller.

How does it know how much a Volt is?

The DMM contains a voltage reference. This may be as simple as a Zener diode (for cheap handheld 3 1/2 digit meter) or as complex as an oven-controlled voltage reference IC. This is one of the performance limitations of the instrument, be sure to look in the user's manual. There will be a table that describes how accurate the meter actually is. For example, +/- (0.1% + 1) means a gain error of up to 0.1% of the actual value, plus may be off by one count, and that is all plus-or-minus. So if the meter is properly calibrated and it reports 12.34V, then the real input voltage is somewhere in the range between 12.31766V to 12.36234V.

The ICL7106 has an auto-zero phase that tries to eliminate offset errors, but its gain error depends on the performance of the voltage reference. This is one of the performance tests that would be checked by a professional calibration shop.

How does it measure a voltage other than the 2V range?

The ICL7106 itself expects to measure a signal in the range between 0.001V and 2V, so to measure higher or lower voltages, some additional circuitry is used to scale the external input signal. This range selection circuit could be a mechanical rotary switch or a bank of relays. The range selection also adjusts where the decimal point is shown, and may also determine what units are displayed.

How does it measure current?

If measuring unknown current, an internal shunt resistor of known value is used, then the voltage developed across the shunt is what is displayed by the DMM. So if the internal shunt resistor is 10 ohm, and the unknown current is 12.34mA, then the voltage is 123.4mV or 0.1234V. This would appear on the display as 1234 counts, so the decimal point would be placed in the hundreds place "12.34".

The shunt resistance also changes with temperature and is self-heating. Power dissipation is also a factor, that's why there is often a separate 10A range which has its own shunt resistor. These are always fuse protected (or else).

How does it measure resistance?

Continuity and diode ranges are also based on the same principle.

take a look at here : https://analyseameter.com/2015/09/digital-multimeter-dmm-working-principle.html

First of all, to measure the voltage you should differentiate between the two kinds : AC and DC, where you should put the switch of the multimeter on the right choice, as in the diagram here diagram 1]1, the owner is measuring an AC voltage, and the red arrow i put is the choice of the DC voltage. Second you should put the com and V+ on the terminals of any thing you want to measure. According to the law of similarity of voltage in parallel connection, the multimeter should be connected in parallel as i mentioned, so by this law your are measuring the voltage you want(diagram 2). 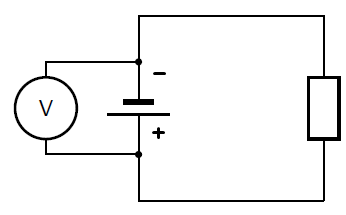 For current measuring and according to law of similarity of current in series connection, you should connect the multimeter as a wire where the current passes, and this multimeter will read this current and display it (diagram 3). 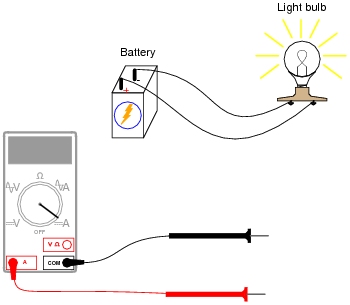 Most ohmmeters work by passing a (usually small) current through the sample and measuring the voltage drop - thus finding the resistance by Ohm's law V=IR. Any internal resistance of the ohmmeter should be well known and included in the calculation (usually automatically).

Not the answer you're looking for? Browse other questions tagged voltage multimeter or ask your own question.

3
How do I fix my multimeter, which doesn't seem able to measure resistance?
1
Tried to measure current with red lead in voltage socket - bad for multimeter?
1
How measure the voltage over a large resistance?
2
Multimeter current measurement: internal resistance or input impedance specification
0
How to measure component voltage?
18
Determine voltage drop over 10G resistors with cheap multimeter
0
How can I fix my multimeter which consistently shows 0 for AC voltage?
1
Does the maximum voltage on a multimeter refer to the maximum difference between the two points or the difference between the points and ground?
3
Digital voltmeter reading half the voltage measured with Fluke multimeter