Is there a wrong way to wire a potentiometer?

I'm using Circuit Wizard to simulate a circuit and I'm trying to understand how to wire a potentiometer.

While trying to learn how current flows through the pot, I found that it works in both directions as it's just a variable resistor. But when drawing a schematic, which is the RIGHT way that current should flow through the component? 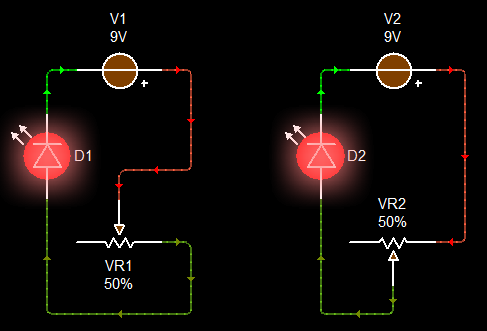 It's good to keep track of which way a pot is wired. All the schematic symbols for pots that I have created have that information as part of the symbol. 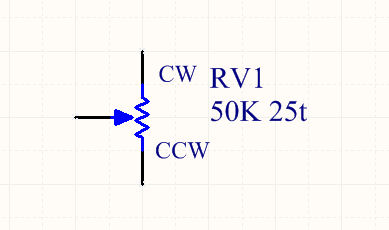 For pots that are not 'B' (linear) taper, such as audio volume controls, it's not only good, it's necessary, because the resistance change for a given angle rotation is much different at one end compared to the other. The consequence would be that the volume is very high over most of the rotation and then suddenly drops as the pot is rotated mostly CW, with reasonable volume levels being very hard to set.

It's intuitive (to me anyway) that clockwise rotation of the shaft should increase the brightness in this case, so you would want to connect the pot so that happens. (You should also add a series resistor so that the maximum current is limited and does not damage the LED and/or pot).

In fact, it's functional either way, and with a linear pot, not much different.

And, as others have suggested, it's typical to connect the "open" end of the pot to the wiper, which slightly reduces the wiper noise and has other beneficial effects.

As far as current flow, the simulator diagrams show conventional current, which flows from + to -, so in the direction of the arrows. Electrons flow the opposite direction but you don't need to worry about that in most situations.

A potentiometer is just a resistor - current can flow through it in any direction (including from/to both ends to/from the wiper).

If you are just using it as a single variable resistor, rather than as a voltage divider, it is common practice to connect the wiper to the "unused" end of the element - this ensures that there is still a resistor in the circuit if the wiper connection becomes intermittent.

The arrow you are referring to, which is the "wiper", is only an arrow to show that it's a wiper. That is to say that it's irrelevant to direction of current.

Electrically it doesn't make a difference which direction the current flows. But physically, there are some considerations. Typically, a pot will have 3 pins, with the middle-pin as the wiper.

For a simple symmetrical trim-pot, it may not matter physically how the pot is oriented on the board. But for some pots, you may not be able to fit the pins in a certain orientation (too close to the edge of a PCB, for example). Thus pin 3 might be closer to the circuit you want then pin 1, and you simply choose to use pin 3.

A common determining factor is the direction of the knob's turning.
Say for example you want the resistance to increase as a pot's knob is turned clockwise. That determines which end of the pot to connect to. Because you want the resistance to increase in a certain turning direction, you must choose the other pin to use besides the wiper (1 or 3). This should be detailed in the datasheet.

Not the answer you're looking for? Browse other questions tagged schematics simulation potentiometer or ask your own question.