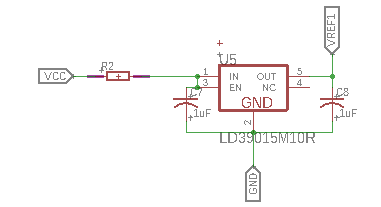 The value of VCC is 3.3 Volts. The goal is to supply an ADC channel with a constant stable voltage so I can use that to reverse calculate the VCC. And yes I have looked at both Vref IC and Vreg IC options. But while testing the Volt Reg option, I am seeing a 1.189 volts at the output of the voltage regulator with R2 = 10k, 1.191 V for a R2 = 1k and 1.11V for R2 = 100k Ohm. First of all why am I not getting exact 1.2V rated output from the regulator given it satisfies the min input voltage and the dropout voltage. Secondly how does changing the resistance value change the output of the regulator even when the voltage regulator gets sufficient input voltage. Thanks.

First of all why am I not getting exact 1.2V rated output from the regulator given it satisfies the min input voltage and the dropout voltage.

The 1.2 volt regulator (LD39015) has a +/- 2% tolerance on its output hence it could be as low as 1.176 volts. Regarding you altering the value of resistor in series with the input to the regulator you are almost certainly dropping enough voltage to take the input terminal into the regulator beyond its low-drop-out-point.

The device has a quiescent current of 18 uA and, with 100 kohm in series with the input terminal, the voltage formed across that resistor is 1.8 volts. Subtract that from 3.3 volts and the voltage at the input to the regulator is 1.5 volts.

Not the answer you're looking for? Browse other questions tagged voltage power resistors voltage-reference or ask your own question.

4
Can a linear regulator in shutdown mode have the output in parallel with a switching regulator
1
LM317 Voltage Regulator + ammeter = firecracker?
2
How to adjust linear voltage regulator equivalent?
0
How to calculate the feedback resistors for an SMPS
6
Behavior of Boost and Buck Converters
0
Output Capacitor Voltage Holding time during dropout
1
LDO Heating Issue
1
Linear regulator heats up at 60 volts
3
Adjusting buck regulator with DAC