What is the purpose of the op-amp feedback circuit?

This is an existing circuit of buck regulator circuit I have been reviewing with.(Here I have not mentioned the part number of the due to the confidentiality issue) 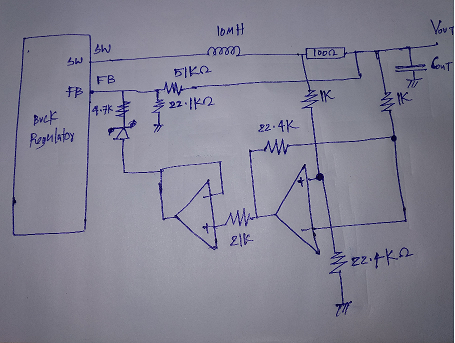 Following is the screenshot of the feedback resistor design. 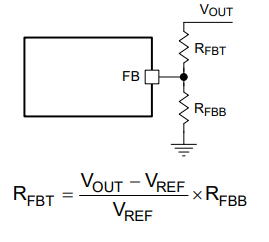 Reference voltage of the buck regulator is 1 V and output is designed for 3.3 V . Feedback regulator resistors (51 kΩ , 22.1 kΩ) combination design I have reviewed and verified the values.

Opamp feedback path and its functions are confusing sections for me. Following is my understanding, current feedback across the 100 Ω resistor is taken across to the amplifier input and voltage output comes in parallel with the feedback path ( 22.1 kΩ) through a buffer.

Can anyone suggest the purpose of the opamp-feedback circuit? And what could be possible output voltages at the buffer (op-amp) output.

The OPAMP circuit does the current limiting. It is not a real current feedback, because the feedback path is alive only during over-current situation, and it can only reduce the output current.

The first stage is a difference amplifier - other call it as differential amplifier as well, but the latter is used more broadly - what converts the differential voltage across the 100Ohm series resistor into a single-ended one, then another OPAMP buffers it and feeds this error voltage back to the FB pin, if the diode opens. The diode rectifies this feedback, or with other words, it disconnects the OPAMP circuit from the FB pin under normal output current range. Not clear why is a zener diode drawn in the schematic. Any simple diode would do the job.

Not the answer you're looking for? Browse other questions tagged operational-amplifier buck or ask your own question.

3
Understanding Op-amp Negative Feedback
1
What should be the output voltage for Virtual Ground to occur in Inverting OpAmps?
2
Avoiding oscillations in a unity gain voltage buffer circuit
5
Why does a buffer op-amp need two feedback paths?
3
How does the coupled inductor, capacitor and diode combination work?
1
What is the fool-proof method to confirm whether the op-amp has -ve feedback?
3
Adjust regulator to output lower than its feedback reference